Encyclopedia
For the new municipalities of Greece
Greece
Greece , officially the Hellenic Republic , and historically Hellas or the Republic of Greece in English, is a country in southeastern Europe....
see the Kallikratis Programme

The municipalities and communities of Greece
Greece
Greece , officially the Hellenic Republic , and historically Hellas or the Republic of Greece in English, is a country in southeastern Europe....
are one of several levels of government within the organizational structure of that country. Thirteen regions called peripheries
Peripheries of Greece
The current official regional administrative divisions of Greece were instituted in 1987. Although best translated into English as "regions", the transcription peripheries is sometimes used, perhaps to distinguish them from the traditional regions which they replaced. The English word 'periphery'...
form the largest unit of government beneath the State. Within these peripheries are 54 second-level areas called prefectures
Prefectures of Greece
During the first administrative division of independent Greece in 1833–1836 and then again from 1845 until their abolition with the Kallikratis reform in 2010, the prefectures were the country's main administrative unit...
. Prefectures are then divided into municipalities
Municipality
A municipality is essentially an urban administrative division having corporate status and usually powers of self-government. It can also be used to mean the governing body of a municipality. A municipality is a general-purpose administrative subdivision, as opposed to a special-purpose district...
and communities
Community
The term community has two distinct meanings:*a group of interacting people, possibly living in close proximity, and often refers to a group that shares some common values, and is attributed with social cohesion within a shared geographical location, generally in social units larger than a household...
referred to as the first-level of government.


Constitutional provisions for communities and municipalities

Article 102 of the Greek constitution outlines the mandate of municipalities and communities and their relationship to the larger State:


How communities and municipalities are formed

A settlement with a population of at least 1,500 inhabitants may become a community if it can meet the following conditions:

Neighbouring municipalities or communities can merge if municipal and communal councils have the support of 60% of council members or if 50% of residents petition this move.


Organization of communities and municipalities

Communities are governed by a community council (simvoulio) made up of 7 to 11 members and led by a community president (proedros kinotitas). A deputy chairperson from a communal quarter (if the community has been further divided) may also take part in council meetings when specific issues of a communal interest are being discussed.

A municipal council (dimotiko simvoulio) and town hall committee led by a mayor (dimarchos) governs municipalities. Depending on the size of the municipality, municipal councils are made up of anywhere from 11 to 41 council members representing "municipal departments" (many of which were small communities that had been merged into the municipality). In addition, the council elects 2 to 6 town hall committee members. In the case of mergers, local village or town councils (like communal quarters) may still exist to provide feedback and ideas to the larger governing body.

Council members are elected via public election every four years on the basis of a party system. Three-fifths of all seats go to the party winning a majority and two-fifths of the seats go to remaining parties based on a proportional system. The municipal council elects the town hall committee for a term of two years.

The State ultimately oversees the actions of local governments, but the Municipal and Communal Code still provides communities and municipalities with legal control over the administration of their designated areas.


Participation of citizens in local decision-making

Citizens have very few opportunities for direct participation in decision-making outside the elections held every four years. Beyond national referendums that may be called for critical issues, citizens cannot request local referendums. The only other possibility for direct input by citizens is if the local municipality establishes district councils or if the community president calls a people's assembly to discuss issues of concern. The organization of these public opportunities, however, is so solely at the discretion of the community or municipal leadership.


Responsibilities of community and municipal governments

Revenues come from both ordinary and extraordinary sources.

Ordinary revenue is derived from the State budget, property revenues, and established taxes and fees. By law, the State funds first level governments on the basis of a fixed formula: 20% of legal persons’ income tax, 50% of traffic duties and 3% of property transfer duties. For smaller populated communities and municipalities, the State has also allocated additional revenue based on other expenses (e.g. the cost of supplying water, maintaining road networks, and climate). Local governments are required to direct any property or resource fees to related expenses (e.g. drinking water fees must go towards the maintenance and improvement of the water system). Other forms of taxation or fines (e.g. parking fees) can be used wherever the government deems necessary.

Income generation is not limited to traditional service sources. Local governments can also initiate or participate in entrepreneurial activities that include a wide range of possible partnerships.

Each year communities and municipalities formulate their budgets in terms of expected revenues and expenses. Financial management and auditing is then based on this plan. 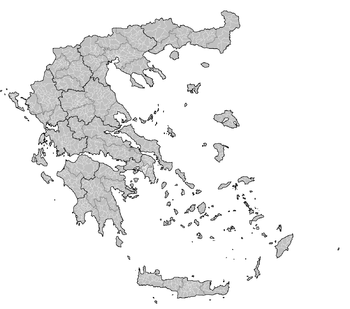 Population of communities and municipalities

Municipalities and communities vary in population from 745,514 (Athens
Athens
Athens , is the capital and largest city of Greece. Athens dominates the Attica region and is one of the world's oldest cities, as its recorded history spans around 3,400 years. Classical Athens was a powerful city-state...
) to 28 (Gramos, in Kastoria Prefecture) with an average
Average
In mathematics, an average, or central tendency of a data set is a measure of the "middle" value of the data set. Average is one form of central tendency. Not all central tendencies should be considered definitions of average....
of 10,603.5 and a median
Median
In probability theory and statistics, a median is described as the numerical value separating the higher half of a sample, a population, or a probability distribution, from the lower half. The median of a finite list of numbers can be found by arranging all the observations from lowest value to...
of only 4,661.5 (2001 census "real" population, including Agion Oros as one of the municipalities). The following chart illustrates the range:


Land area of communities and municipalities

Municipalities vary in land area from 873.552 km² (Kato Nevrokopi
Kato Nevrokopi
Kato Nevrokopi is a municipality and town within that municipality in the northwest section of the Drama peripheral unit, Greece. Before the 2011 local government reform, it was the largest municipality in all of Greece, covering an area of 873.552 km² . The 2001 census reported a population...
in Drama Prefecture) to 0.800 km² (Nea Chalkidona
Nea Chalkidona
Nea Chalkidona is a suburb in the northern part of Athens, Greece. Since the 2011 local government reform it is part of the municipality Filadelfeia-Chalkidona, of which it is a municipal unit....
in Athens Prefecture), with an average of 127.618 km² and a median of 105.669 km².


History of community and municipal governments