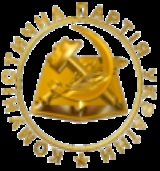 Encyclopedia
The Communist Party of Ukraine is a political party
Political party
A political party is a political organization that typically seeks to influence government policy, usually by nominating their own candidates and trying to seat them in political office. Parties participate in electoral campaigns, educational outreach or protest actions...
in Ukraine
Ukraine
Ukraine is a country in Eastern Europe. It has an area of 603,628 km², making it the second largest contiguous country on the European continent, after Russia...
, currently led by Petro Symonenko
Petro Symonenko
Petro Mykolayovych Symonenko is a Ukrainian politician and the First Secretary of the Communist Party of Ukraine. Symonenko was the Communist Party's candidate in both the 1999 and 2004 presidential elections. During the Ukrainian presidential election, 2010 he was the candidate of the Election...
.

The party fights the Ukrainian national self-determination by identifying any Ukrainian national parties as the National-Fascist ones (Press Service of KPU on October 14, 2011 "Communists call to strictly prevent any appearance of national-fascism in Ukraine" ("Коммунисты призывают жестко пресекать любые проявления национал-фашизма в Украине"), the Second Secretary of the Central Committee of KPU, Igor Alekseyev).

In the 2010 local elections the party scored between 5% and 12% of the votes in all Ukrainian Oblasts except in Western Ukraine
Western Ukraine
Western Ukraine may refer to:* Generally, the territories in the West of Ukraine* Eastern Galicia* West Ukrainian National Republic...
and Kiev Oblast
Kiev Oblast
Kyiv Oblast, sometimes written as Kiev Oblast is an oblast in central Ukraine.The administrative center of the oblast is the city of Kyiv , also being the capital of Ukraine...
where they almost had no voters.