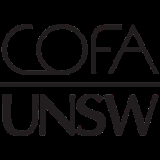 The College of Fine Arts (COFA) is the creative arts faculty of the University of New South Wales
University of New South Wales
The University of New South Wales , is a research-focused university based in Kensington, a suburb in Sydney, New South Wales, Australia...
and is located on Oxford Street
Oxford Street, Sydney
Oxford Street is a major thoroughfare in Sydney, Australia running from Whitlam Square on the south-east corner of Hyde Park in the central business district of Sydney to Bondi Junction in the Eastern Suburbs. Close to the CBD in particular, the street is lined with numerous shops, bars and...
, Paddington
Paddington, New South Wales
Paddington is an inner-city, eastern suburb of Sydney, in the state of New South Wales, Australia. Paddington is located 3 kilometres east of the Sydney central business district and lies across the local government areas of the City of Sydney and the Municipality of Woollahra...
, Sydney
Sydney
Sydney is the most populous city in Australia and the state capital of New South Wales. Sydney is located on Australia's south-east coast of the Tasman Sea. As of June 2010, the greater metropolitan area had an approximate population of 4.6 million people...
, Australia
Australia
Australia , officially the Commonwealth of Australia, is a country in the Southern Hemisphere comprising the mainland of the Australian continent, the island of Tasmania, and numerous smaller islands in the Indian and Pacific Oceans. It is the world's sixth-largest country by total area...
.

The College of Fine Arts, a faculty of The University of New South Wales UNSW, can trace its history from the formation of The Sydney Mechanics' School of Arts in 1833, which led to the formation of Sydney Technical College in 1878.

The City Art Institute seceded from Sydney CAE in 1987 and joined the Sydney College of the Arts (SCA) to create the NSW Institute of the Arts. The two institutions remained at their original locations in Paddington and Balmain but the partnership was short-lived. In 1988 Federal legislation
Legislation
Legislation is law which has been promulgated by a legislature or other governing body, or the process of making it...
removed the distinction between state-owned Colleges of Advanced Education and federally-funded universities
University
A university is an institution of higher education and research, which grants academic degrees in a variety of subjects. A university is an organisation that provides both undergraduate education and postgraduate education...
, resulting in the amalgamation of most CAEs with existing universities. The devolution of NSW Institute of the Arts was included in these changes, made effective on 1 January 1990, when Sydney College of the Arts joined the University of Sydney
University of Sydney
The University of Sydney is a public university located in Sydney, New South Wales. The main campus spreads across the suburbs of Camperdown and Darlington on the southwestern outskirts of the Sydney CBD. Founded in 1850, it is the oldest university in Australia and Oceania...
and the City Art Institute, renamed the College of Fine Arts (COFA), became a faculty of The University of New South Wales.

Still located at the original Paddington Campus, COFA is a prominent player in the teaching of and research in art, design and multi media, art history and theory and art education. It offers bachelor, master and doctoral degrees in fine art, art education, art theory, design and art administration.

In May 2009, the Federal Government gave COFA a vote of confidence to the tune of $48 million, through the Education Investment Fund (EIF), for the $58 million Gateway@COFA redevelopment. For more information on the redevelopment of COFA, visit the redevelopment website http://redevelop.cofa.unsw.edu.au/.

The College of Fine Arts consists of the following four schools:


And boasts a range of fully online art and design courses and an online Masters degree facilitated through the college's online academic unit:

The College offers nine undergraduate degrees
Bachelor's degree
A bachelor's degree is usually an academic degree awarded for an undergraduate course or major that generally lasts for three or four years, but can range anywhere from two to six years depending on the region of the world...
including some double degree
Double degree
A double-degree program, sometimes called a combined degree, conjoint degree, dual degree, or simultaneous degree program, involves a student's working for two different university degrees in parallel, either at the same institution or at different institutions , completing them in less time than...
s associated with other UNSW faculties. Bachelors degrees are offered in Fine Arts
Fine art
Fine art or the fine arts encompass art forms developed primarily for aesthetics and/or concept rather than practical application. Art is often a synonym for fine art, as employed in the term "art gallery"....
, Art Education, Design
Design
Design as a noun informally refers to a plan or convention for the construction of an object or a system while “to design” refers to making this plan...
, Art Theory, Digital Media, Art Education/Design, Arts/Art Theory, Art Theory/Social Science, Art Theory/Laws. Postgraduate
Postgraduate education
Postgraduate education involves learning and studying for degrees or other qualifications for which a first or Bachelor's degree generally is required, and is normally considered to be part of higher education...
degrees in coursework are offered in Art, Art Administration, Art and Design Education, Design and Cross-Disciplinary Art and Design (fully online degree). COFA also offers Masters degrees by research and has an active PhD program. In addition COFA runs non-award short courses that are open to the public.

The Paddington campus houses the Clement Semmler Library, which maintains a large collection of art and design literature, journals, periodicals and electronic resources. The Ivan Dougherty Gallery, which had a regular schedule of exhibitions and seminars throughout the year, has recently closed while the campus is under reconstruction.

In 2007, the COFA Students' Association was wound up and reformed with the three previous Kensington student organisations as a new student organisation known as the Arc @ UNSW
Arc @ UNSW
Arc @ UNSW Limited is the student organisation at the University of New South Wales and is a not-for-profit public company based in Sydney, Australia. The organisation supports the activities of student clubs, student volunteer programs such as orientation week, student publications, a student...
. This new student organisation is a major service provider on campus, running student media such as Zing Tycoon (a student zine) and the College Voice, operating the student-run Kudos Gallery, and funding the Grants and Sponsorship Scheme for non-academic artistic initiatives. The Arc Student Representative Council COFA Department represents COFA students to COFA and UNSW. It also represents students nationally and fights for their rights. The Arc also provides support and funding to university clubs and societies.

This gallery is a student run initiative run by the Arc Kudos Gallery Management Committee. The Committee is made up of COFA students from each COFA School. In 2008 the Gallery celebrated its 10th anniversary with the exhibition 'Kudos to Kudos'.

Academic units are supported by various administration staff including a large technical support staff that helps maintain the various art, design and digital media disciplines undertaken at the College.
Prominent members of staff include:

All staff profiles can be accessed from the COFA website: Staff Profiles