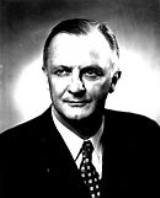 Darden was born on a farm near Franklin, Virginia
Franklin, Virginia
Franklin is an independent city in Virginia. The Bureau of Economic Analysis combines the city of Franklin with Southampton county for statistical purposes. The population was 8,582 in 2010.-History:...
and served in the French Army and the United States Marine Corps
United States Marine Corps
The United States Marine Corps is a branch of the United States Armed Forces responsible for providing power projection from the sea, using the mobility of the United States Navy to deliver combined-arms task forces rapidly. It is one of seven uniformed services of the United States...
Air Service during World War I
World War I
World War I , which was predominantly called the World War or the Great War from its occurrence until 1939, and the First World War or World War I thereafter, was a major war centred in Europe that began on 28 July 1914 and lasted until 11 November 1918...
. He later attended the University of Virginia, where he was a member of Phi Gamma Delta
Phi Gamma Delta
The international fraternity of Phi Gamma Delta is a collegiate social fraternity with 120 chapters and 18 colonies across the United States and Canada. It was founded at Jefferson College, Pennsylvania, in 1848, and its headquarters are located in Lexington, Kentucky, USA...
fraternity, and graduated in 1922 before going on to Columbia Law School
Columbia Law School
Columbia Law School, founded in 1858, is one of the oldest and most prestigious law schools in the United States. A member of the Ivy League, Columbia Law School is one of the professional graduate schools of Columbia University in New York City. It offers the J.D., LL.M., and J.S.D. degrees in...
(grad. 1923) and then Oxford University. He was a member of the Virginia House of Delegates
Virginia House of Delegates
The Virginia House of Delegates is the lower house of the Virginia General Assembly. It has 100 members elected for terms of two years; unlike most states, these elections take place during odd-numbered years. The House is presided over by the Speaker of the House, who is elected from among the...
from 1930 to 1933 and a U.S. delegate to the United Nations
United Nations
The United Nations is an international organization whose stated aims are facilitating cooperation in international law, international security, economic development, social progress, human rights, and achievement of world peace...
General Assembly in 1955. He died in 1981 at his home in Norfolk, Virginia
Norfolk, Virginia
Norfolk is an independent city in the Commonwealth of Virginia in the United States. With a population of 242,803 as of the 2010 Census, it is Virginia's second-largest city behind neighboring Virginia Beach....
.

As governor, he reorganized Virginia's civil defense, reformed the penal system, and created a pension plan for state employees and teachers.


President of the University of Virginia

Darden was elected president of the University of Virginia in 1947, despite public misgivings from some among the University faculty, who resented his lack of faculty experience, and a portion of the student body, who feared that he planned to abolish the fraternity system at the University. The latter concern had its origin in Darden's actions as Governor of Virginia, where he recommended barring students at the College of William and Mary from living in fraternity or sorority houses on the grounds that it was "undemocratic" and placed undue financial burden on parents. While Darden did not impose similar restrictions at Virginia, he did attempt to implement other measures, such as a ban on first year rushing.

At Virginia, Darden was responsible for the building of the student union building, named Newcomb Hall for his predecessor John Lloyd Newcomb
John Lloyd Newcomb
John Lloyd Newcomb was an American educator. He served as the second president of the University of Virginia, ascending to the position after the death of Edwin Alderman...
; the establishment of the Judiciary Committee, which handled student misconduct that did not rise to the level of an honor offense
Honor code
An honour code or honour system is a set of rules or principles governing a community based on a set of rules or ideals that define what constitutes honorable behavior within that community. The use of an honor code depends on the idea that people can be trusted to act honorably...
; the creation of the graduate school of business administration, named in his memory; and significant improvements to faculty salaries. Upon his retirement, he was presented with the Thomas Jefferson Award and the Raven Award
Raven Society
The Raven Society is the University of Virginia's oldest honorary society. Founded in 1904 by University student William McCully James, and named in honor of the famous poem by Edgar Allan Poe .According to its constitution, one of the Raven Society's main goals is "to bring together the best men...
.
The source of this article is wikipedia, the free encyclopedia.  The text of this article is licensed under the GFDL.