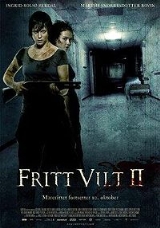 Encyclopedia
Cold Prey 2: Resurrection is a 2008 Norwegian horror film
Horror film
Horror films seek to elicit a negative emotional reaction from viewers by playing on the audience's most primal fears. They often feature scenes that startle the viewer through the means of macabre and the supernatural, thus frequently overlapping with the fantasy and science fiction genres...
, directed by Mats Stenberg. It is the sequel to the highly successful Cold Prey (Fritt Vilt), and premiered in Norway on 10 October 2008. It was directed by Roar Uthaug
Roar Uthaug
Roar Uthaug is a Norwegian film director. He graduated from The Norwegian Filmschool in 2002.- Career :...
and starred Ingrid Bolsø Berdal
Ingrid Bolsø Berdal
Ingrid Bolsø Berdal is a Norwegian actress.-Biography:Berdal started studying music and singing in high school and after graduating she continued her music education at the University of Trondheim , studying jazz singing and improvisation for two years...
in the leading role. The film picks up where the first left off. The female protagonist is picked up in the wilderness and brought to a hospital, but soon her nightmare starts all over again. Reviewers, though not overwhelmed, declared it a surprisingly good sequel to the original. Its opening weekend was the best for any Norwegian movie in history.

Jannicke (Berdal), the only survivor from the massacre depicted in the previous movie, is picked up in Jotunheimen
Jotunheimen
Jotunheimen is a mountainous area of roughly 3,500 km² in Southern Norway and is part of the long range known as the Scandinavian Mountains. The 29 highest mountains in Norway are all in Jotunheimen, including the very highest - Galdhøpiggen...
and brought to a hospital in Otta
Otta, Norway
is a town in the municipality of Sel in the county of Oppland in Norway. It has about 2,750 inhabitants. The Otta river joins the Gudbrandsdalslågen river at Otta. Next to Otta lies the massive Rondane, which became the first national park in Norway in 1962, and which has several mountains over...
. At the hospital she receives good care, but seems distant from her caretakers.

While she stays in the hospital she meets a boy named Daniel and the two have a pleasant conversation. Meanwhile in the rest of the hospital police officers Elnar and Kim discuss Jannickes situation and investigate her last known location at the hotel where they discover several bodies nearby including the mountain mans and has it sent back to the hospital.

At the hospital officer Sverre flirts with the local nurse Audhiled while nurse Camilla tries to uncover Jannickes story. It is also revealed that Jannicke has been suffering nightmares from her previous encounter with the mountain man and even goes as far as attacking the mountain mans body in the mourge much to the surprise of her caretakers.

They decide to drug her to keep her calm after her emotional outburst much to the protest of nurse Camilla. During this time the police investigation continues as they begin to discover more bodies.

However at the hospital the mountain man shows sign of life and is frantically resuscitated much to the horror of Jannicke who violently attempts to stop them but is tranqulized in the process. The doctors manage to successfully bring the mountain man back to life and leave him under watch by Sverre. Eventually the mountain man wakes up murders a distracted Sverre and breaks free.

He then proceeds to go in a killing spree across the hospital while a recently awoken Jannicke escapes the hospital in the aftermath with Daniel and Cammila while locking the mountain man in the basement.

They proceed to rendezvous with officers Kim, Ole, Elnar and Johan outside. After being told to stay outside by Elnar who has been investigating the mountain mans back ground Jannicke watches nervously as he enters the hospital with Ole and Kim accompanying while Daniel is taken away by his mother.

Inside the officers fail to find the mountain man and decide to pull back from the hospital but are side tracked by Johans radio message revealing the location of Sverres body.

After finding said body the officers are attacked and all but Ole are killed in the ambush. After watching gunshots within the hospital Jannicke offers to enter the hospital with officer Johan however this plan is interrupted when the mountain man attacks wounding her and killing officer Johan as well as frightning Camilla.

The remaining two are then saved by a severely wounded Ole who dies of his wounds distracting the survivors allowing the mountain man to escape. Enraged Jannicke travels to the hotel where the first movie occurred and falls asleep waiting for the mountain man.

The mountain man eventually appears and seems to have the upper hand over Jannicke but is defeated when Cammila arrives. Not satisfyed with the mountain man being stabbed through the chest by his own pick axe Jannicke ensures the mountain mans death with a shotgun blast to the head.

The first of the two Cold Prey-movies was extremely well received, and seen by 260,000– a high number for Norway. One reviewer even described it as "the best slasher flick" of 2006. For this reason the expectations on the sequel were high, and Ingrid Bolsø Berdal
Ingrid Bolsø Berdal
Ingrid Bolsø Berdal is a Norwegian actress.-Biography:Berdal started studying music and singing in high school and after graduating she continued her music education at the University of Trondheim , studying jazz singing and improvisation for two years...
(whose character was the only surviving member of the original cast) emphasised the determination of everyone involved to make good film, not simply cash in on a mediocre sequel. Though she enjoyed the role, Berdal insisted that this would be the last instalment.

Norsk Filmfond gave financial support to the project 4 February 2008, and the new cast was announced 20 February. Mats Stenberg took over as director after Roar Uthaug
Roar Uthaug
Roar Uthaug is a Norwegian film director. He graduated from The Norwegian Filmschool in 2002.- Career :...
, who had directed the first movie. Filming started in late February.

The shooting was eventful, with Berdal at one point suffering from food poisoning; having to perform scenes in between throwing up. There were also lighter moment, with team members hiding in various rooms of the hotel where they were staying, doing their best to scare the others by jumping out wearing masks. While the outdoor scenes were filmed in the wild scenery of Jotunheimen
Jotunheimen
Jotunheimen is a mountainous area of roughly 3,500 km² in Southern Norway and is part of the long range known as the Scandinavian Mountains. The 29 highest mountains in Norway are all in Jotunheimen, including the very highest - Galdhøpiggen...
and the village Otta, the scenes in the hospital were shot in Åslund hospital in Ås
Ås
Ås is a municipality in Akershus county, Norway. It is part of the Follo traditional region. The administrative centre of the municipality is the village of Ås...
.

Norwegian reviewers were remarkably unanimous in their assessment of the film. All of the three major national newspapers gave it four out of six points. The consensus was that, even though the sequel did not quite live up to the original, it was still enjoyable and not disappointing. Morten Ståle Nilsen, writing for Verdens Gang
Verdens Gang
Verdens Gang , generally known under the abbreviation VG, is a Norwegian tabloid newspaper...
, commented on the beautiful natural setting, and commended Berdal for managing to look both battered and sexy at the same time. Dagbladet
Dagbladet
Dagbladet is Norway's second largest tabloid newspaper, and the third largest newspaper overall with a circulation of 105,255 copies in 2009, 18,128 papers less than in 2008. The editor in chief is Lars Helle....
s Vegard Larsen declared himself surprised that the sequel turned out as well as it did. Like Nilsen, he compared Berdal to Ellen Ripley
Ellen Ripley
Ellen Ripley is a fictional character and the main protagonist of the Alien film series played by American actress Sigourney Weaver. The character was heralded as a seminal role for challenging gender roles, particularly in the science fiction genre, and remains Weaver's most famous role to...
, Sigourney Weaver
Sigourney Weaver
Sigourney Weaver is an American actress. She is best known for her critically acclaimed role of Ellen Ripley in the four Alien films: Alien, Aliens, Alien 3 and Alien Resurrection, for which she has received worldwide recognition .Other notable roles include Dana...
's character in the Alien
Alien (franchise)
The Alien film series is a science fiction horror film franchise, focusing on Lieutenant Ellen Ripley and her battle with an extraterrestrial lifeform, commonly referred to as "the Alien"...
-films. Per Haddal
Per Haddal
Per Haddal is a Norwegian film critic.Born in Levanger, he has an M.A. in English. He started working for the newspaper Vårt Land, where he remained from 1969 to 1978. He also worked freelance for the Norwegian Broadcasting Corporation in the period 1975 to 1987. In 1978 he became the main film...
in Aftenposten
Aftenposten
Aftenposten is Norway's largest newspaper. It retook this position in 2010, taking it from the tabloid Verdens Gang which had been the largest newspaper for several decades. It is based in Oslo. The morning edition, which is distributed across all of Norway, had a circulation of 250,179 in 2007...
concluded that the film failed to scare its audience as much as it intended, but he nevertheless complimented the solid handiwork.

The movie was seen by 101,564 people on its opening weekend, which was a new Norwegian record for a domestic movie. The previous record– of 70,952– was set by Mors Elling in 2003. The box-office success was largely the result of a massive marketing campaign in the weeks leading up to the movie's release.