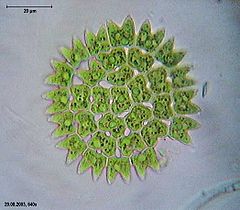 A coenobium is a colony
Colony (biology)
In biology, a colony reference to several individual organisms of the same species living closely together, usually for mutual benefit, such as stronger defense or the ability to attack bigger prey. Some insects live only in colonies...
containing a fixed number of cells, with little or no specialization. They occur in several groups of algae. The cells are often embedded in a mucilaginous
Mucilage
Mucilage is a thick, gluey substance produced by most plants and some microorganisms. It is a polar glycoprotein and an exopolysaccharide.It occurs in various parts of nearly all classes of plant, usually in relatively small percentages, and is frequently associated with other substances, such as...
matrix and may be motile or non-motile.

Examples include Volvox
Volvox
Volvox is a genus of chlorophytes, a type of green algae. It forms spherical colonies of up to 50,000 cells. They live in a variety of freshwater habitats, and were first reported by Antonie van Leeuwenhoek in 1700. Volvox developed its colonial lifestyle .-Description:Volvox is the most developed...
and its relatives, Scenedesmus
Scenedesmus
Scenedesmus is a genus of algae, specifically of the Chlorophyceae. They are colonial and non-motile....
, Pediastrum
Pediastrum
Pediastrum is a genus of algae, in the family Hydrodictyaceae. It is a nonmotile coenobial green alga that inhabits freshwater environments.-Reproduction:...
, and Hydrodictyon.
The source of this article is wikipedia, the free encyclopedia.  The text of this article is licensed under the GFDL.