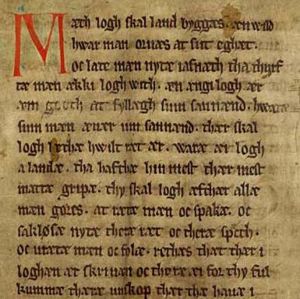 Codex Holmiensis is the manuscript
Manuscript
A manuscript or handwrite is written information that has been manually created by someone or some people, such as a hand-written letter, as opposed to being printed or reproduced some other way...
of the Danish
Denmark
Denmark is a Scandinavian country in Northern Europe. The countries of Denmark and Greenland, as well as the Faroe Islands, constitute the Kingdom of Denmark . It is the southernmost of the Nordic countries, southwest of Sweden and south of Norway, and bordered to the south by Germany. Denmark...
Code of Jutland, a civil code
Civil code
A civil code is a systematic collection of laws designed to comprehensively deal with the core areas of private law. A jurisdiction that has a civil code generally also has a code of civil procedure...
enacted under Valdemar II of Denmark
Valdemar II of Denmark
Valdemar II , called Valdemar the Victorious or Valdemar the Conqueror , was the King of Denmark from 1202 until his death in 1241. The nickname Sejr is a later invention and was not used during the King's own lifetime...
. The code covered Funen
Funen
Funen , with a size of 2,984 km² , is the third-largest island of Denmark following Zealand and Vendsyssel-Thy, and the 163rd largest island of the world. Funen is located in the central part of the country and has a population of 454,358 inhabitants . The main city is Odense, connected to the...
and Jutland
Jutland
Jutland , historically also called Cimbria, is the name of the peninsula that juts out in Northern Europe toward the rest of Scandinavia, forming the mainland part of Denmark. It has the North Sea to its west, Kattegat and Skagerrak to its north, the Baltic Sea to its east, and the Danish–German...
down to the Eider River
Eider River
The Eider is the longest river of the German state of Schleswig-Holstein. The river starts near Bordesholm and reaches the southwestern outskirts of Kiel on the shores of the Baltic Sea, but flows to the west, ending in the North Sea...
.
The king did not sign it in Jutland, but rather at the royal castle at Vordingborg
Vordingborg
Vordingborg is a municipality in Region Sjælland on the southeast coast of the island of Zealand in south Denmark. The municipality includes the island of Masnedø, and covers an area of 621 km². It has a total population of 46,600...
in early 1241.

The Code was succeeded by Christian V's Danish Code
Danish Code
Danske Lov is the title of a Danish statute book from 1683, that previously formed the basis for the Danish legislation. Even though it is mainly a compilation of older, regional laws, it took 7 different commissions several decades under two different monarchs to put the Code together...
of 1683; however in certain parts of Schleswig
Schleswig
Schleswig or South Jutland is a region covering the area about 60 km north and 70 km south of the border between Germany and Denmark; the territory has been divided between the two countries since 1920, with Northern Schleswig in Denmark and Southern Schleswig in Germany...
parts of the Code were used until the arrival of Bürgerliches Gesetzbuch
Bürgerliches Gesetzbuch
The Bürgerliches Gesetzbuch is the civil code of Germany. In development since 1881, it became effective on January 1, 1900, and was considered a massive and groundbreaking project....
in 1900.