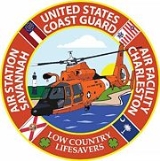 Coast Guard and Air Station (CGAS) Savannah support a multitude of Coast Guard missions worldwide.
Air Station Savannah provides Search & Rescue
Search and rescue
Search and rescue is the search for and provision of aid to people who are in distress or imminent danger.The general field of search and rescue includes many specialty sub-fields, mostly based upon terrain considerations...
(SAR) coverage 24 hours a day, 365 days a year, for 450 miles of shoreline from the northern border of South Carolina
South Carolina
South Carolina is a state in the Deep South of the United States that borders Georgia to the south, North Carolina to the north, and the Atlantic Ocean to the east. Originally part of the Province of Carolina, the Province of South Carolina was one of the 13 colonies that declared independence...
to Melbourne, Florida
Melbourne, Florida
Melbourne is a city in Brevard County, Florida, United States. As of 2009, the population estimated by the U.S. Census Bureau is 78,323. The municipal area is the second largest by size and by population in the county. Melbourne is a principal city of the Palm Bay – Melbourne – Titusville, Florida...
, averaging more than 250 SAR cases a year. Other missions include: Marine Safety, Marine Environmental Protection
Marine Environmental Protection
Marine environmental protection is one of the eleven missions of the United States Coast Guard.Officially, there are five areas of emphasis in the marine environmental protection mission...
, Fisheries Enforcement, Aids to Navigation support
Navigational aid
A navigational aid is any sort of marker which aids the traveler in navigation; the term is most commonly used to refer to nautical or aviation travel...
, Migrant Interdiction, Drug Interdiction
War on Drugs
The War on Drugs is a campaign of prohibition and foreign military aid and military intervention being undertaken by the United States government, with the assistance of participating countries, intended to both define and reduce the illegal drug trade...
, Other Law Enforcement
Law enforcement agency
In North American English, a law enforcement agency is a government agency responsible for the enforcement of the laws.Outside North America, such organizations are called police services. In North America, some of these services are called police while others have other names In North American...
and Defense Readiness. Many of these missions require deployment of aviation detachments about Coast Guard Cutters
United States Coast Guard Cutter
Cutter is the term used by the United States Coast Guard for its commissioned vessels. A Cutter is or greater in length, has a permanently assigned crew, and has accommodations for the crew to live aboard...
.

CGAS Savannah was commissioned in the summer of 1963 on what was then known as Hunter Army Air Force Base (which became Hunter Army Airfield
Hunter Army Airfield
Hunter Army Airfield , located in Savannah, Georgia, United States, is a military airfield and subordinate installation to Fort Stewart.Hunter features a runway that is 11,375 feet long and an aircraft parking area that is more than 350 acres...
in 1967). In 1964 the Coast Guard's original HH-52A Basic Operational Training Unit (BOTU) was established in Savannah. This unit was the forerunner of the Coast Guard's specialized aviator training program now at the Aviation Training Center in Mobile, Alabama
Mobile, Alabama
Mobile is the third most populous city in the Southern US state of Alabama and is the county seat of Mobile County. It is located on the Mobile River and the central Gulf Coast of the United States. The population within the city limits was 195,111 during the 2010 census. It is the largest...
.