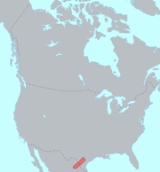 Encyclopedia
Coahuilteco was a language isolate
Language isolate
A language isolate, in the absolute sense, is a natural language with no demonstrable genealogical relationship with other languages; that is, one that has not been demonstrated to descend from an ancestor common with any other language. They are in effect language families consisting of a single...
that was spoken in southern Texas
Texas
Texas is the second largest U.S. state by both area and population, and the largest state by area in the contiguous United States.The name, based on the Caddo word "Tejas" meaning "friends" or "allies", was applied by the Spanish to the Caddo themselves and to the region of their settlement in...
(United States) and northeastern Coahuila
Coahuila
Coahuila, formally Coahuila de Zaragoza , officially Estado Libre y Soberano de Coahuila de Zaragoza is one of the 31 states which, with the Federal District, comprise the 32 Federal Entities of Mexico...
(Mexico). It was spoken by one tribe of a group of American Indian hunter-gatherers named the Quems
Quems
The Quems were a group of American Indians that were recorded as having settled along both banks of the Rio Grande in what is now Texas and Coahuila . A group of hunter-gatherers, they are known to have settled around present-day Eagle Pass and Piedras Negras...
.

Coahuilteco is now extinct
Extinct language
An extinct language is a language that no longer has any speakers., or that is no longer in current use. Extinct languages are sometimes contrasted with dead languages, which are still known and used in special contexts in written form, but not as ordinary spoken languages for everyday communication...
.

Coahuilteco has both short and long vowels.