Encyclopedia
The Co-operative Bank plc is a commercial
Commerce
While business refers to the value-creating activities of an organization for profit, commerce means the whole system of an economy that constitutes an environment for business. The system includes legal, economic, political, social, cultural, and technological systems that are in operation in any...
bank
Bank
A bank is a financial institution that serves as a financial intermediary. The term "bank" may refer to one of several related types of entities:...
in the United Kingdom
United Kingdom
The United Kingdom of Great Britain and Northern IrelandIn the United Kingdom and Dependencies, other languages have been officially recognised as legitimate autochthonous languages under the European Charter for Regional or Minority Languages...
and Guernsey
Guernsey
Guernsey, officially the Bailiwick of Guernsey is a British Crown dependency in the English Channel off the coast of Normandy.The Bailiwick, as a governing entity, embraces not only all 10 parishes on the Island of Guernsey, but also the islands of Herm, Jethou, Burhou, and Lihou and their islet...
, with its headquarters in Manchester
Manchester
Manchester is a city and metropolitan borough in Greater Manchester, England. According to the Office for National Statistics, the 2010 mid-year population estimate for Manchester was 498,800. Manchester lies within one of the UK's largest metropolitan areas, the metropolitan county of Greater...
.

The bank markets itself as an ethical bank, and refuses to invest in companies involved in the arms trade, global climate change, genetic engineering
Genetic engineering
Genetic engineering, also called genetic modification, is the direct human manipulation of an organism's genome using modern DNA technology. It involves the introduction of foreign DNA or synthetic genes into the organism of interest...
, animal testing
Animal testing
Animal testing, also known as animal experimentation, animal research, and in vivo testing, is the use of non-human animals in experiments. Worldwide it is estimated that the number of vertebrate animals—from zebrafish to non-human primates—ranges from the tens of millions to more than 100 million...
and use of sweated labour
Sweatshop
Sweatshop is a negatively connoted term for any working environment considered to be unacceptably difficult or dangerous. Sweatshop workers often work long hours for very low pay, regardless of laws mandating overtime pay or a minimum wage. Child labour laws may be violated. Sweatshops may have...
as stated in its ethical policy. The ethical policy was introduced in 1992. In 2002, Co-operative Group Limited brought the bank and Co-operative Insurance Society under the control of a newly incorporated holding society, Co-operative Financial Services
Co-operative Financial Services
Co-operative Banking Group Limited, formerly Co-operative Financial Services, is a wholly owned subsidiary of Co-operative Group Ltd. in the United Kingdom...
.

The Bank was formed in 1872 as the Loan and Deposit Department of Manchester's Co-operative Wholesale Society
Co-operative wholesale society
A Co-operative Wholesale Society, or CWS, is a form of Co-operative Federation , in this case, the members are usually Consumers' Co-operatives...
, becoming the CWS Bank four years later. However, the bank did not become a registered company
Limited company
A limited company is a company in which the liability of the members or subscribers of the company is limited to what they have invested or guaranteed to the company. Limited companies may be limited by shares or by guarantee. And the former of these, a limited company limited by shares, may be...
until 1971. In 1975, the bank became the first new member of the Committee of London Clearing Banks for 40 years and thus able to issue its own cheque
Cheque
A cheque is a document/instrument See the negotiable cow—itself a fictional story—for discussions of cheques written on unusual surfaces. that orders a payment of money from a bank account...
s.

In 1974 the Co-operative Bank offered free banking for personal customers who remain in credit. It was also the first Clearing Bank to offer an interest-bearing cheque account, in 1982.

Unlike other co-operative bank
Co-operative Bank
The Co-operative Bank plc is a commercial bank in the United Kingdom and Guernsey, with its headquarters in Manchester.The bank markets itself as an ethical bank, and refuses to invest in companies involved in the arms trade, global climate change, genetic engineering, animal testing and use of...
s, such as the Dutch Rabobank
Rabobank
Rabobank is a financial services provider with offices worldwide. Their main location is in the Netherlands. They are a global leader in Food and Agri financing and in sustainability-oriented banking...
, the Co-operative Bank does not have a federal structure of local banks, instead being a single national bank.

The Bank launched a separate internet-only operation known as Smile
Smile (bank)
Smile, or smile.co.uk, is a British internet bank, and a trading division of The Co-operative Bank. It was established as the UK's first full internet bank in 1999. Other banks, like Egg and First-e, had opened in previous years but Smile was the first to offer full-service current accounts,...
in 1999, which, according to surveys, has the highest satisfaction ratings among UK banks and has received many awards in recent years for customer service and online banking. It has around half-a-million customers. Smile has its call centre based at a unique pyramid building in Stockport
Stockport
Stockport is a town in Greater Manchester, England. It lies on elevated ground southeast of Manchester city centre, at the point where the rivers Goyt and Tame join and create the River Mersey. Stockport is the largest settlement in the metropolitan borough of the same name...
. 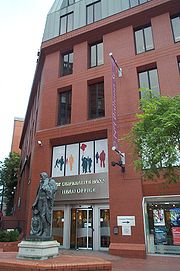 The Co-operative Bank offers whole of market independent financial advice (IFA) through Co-operative Independent Financial Advisers (CIFA). CIFA are based about 500 metres from the Co-operative Bank "Pyramid" in Regent House, Stockport. CIFA offers independent advice mainly on investment, retirement and Inheritance Tax planning. CIFA has over 100 advisers across the UK, incorporating specialists in Complex Pensions and Corporate Financial Planning. CIFA currently has around 70,000 clients across the UK made up of clients with links to the bank, and through their extensive seminar programme held at venues up and down the country.

Such a venture was facilitated by the passing of the Building Societies (Funding) & Mutual Societies (Transfers) Act 2007, although further secondary legislation was required before such a merger could take place.

On 29 April 2009 Britannia's members voted overwhelmingly in favour of the merger.

In the short term, both Britannia Building Society and the Co-operative Financial Services continue operating their own products, branch networks and systems.

While the bank, like any other, is run on profitable lines, it does occasionally turn away new business which it feels may compromise its ethical policies. In the 2005/06 financial year, whilst making profits of £96.5 million, it turned away business of nearly £10 million.

Despite its ethical claims, the bank does invest substantial amounts from its investment funds in Imperial Tobacco and British American Tobacco both of which have faced numerous claims of irresponsible marketing to children, and accusations that they provide support to smugglers .

In June 2005, the bank closed the account of a Christian evangelical
Evangelicalism
Evangelicalism is a Protestant Christian movement which began in Great Britain in the 1730s and gained popularity in the United States during the series of Great Awakenings of the 18th and 19th century.Its key commitments are:...
group (Christian Voice
Christian Voice (UK)
Christian Voice is a Christian pressure group based in the United Kingdom. Its stated objective is "to uphold Christianity as the Faith of the United Kingdom, to be a voice for Biblical values in law and public policy, and to defend and support traditional family life." It is independent of...
) because of its standpoint on homosexuality
Homosexuality
Homosexuality is romantic or sexual attraction or behavior between members of the same sex or gender. As a sexual orientation, homosexuality refers to "an enduring pattern of or disposition to experience sexual, affectional, or romantic attractions" primarily or exclusively to people of the same...
, specifically the group's "discriminatory pronouncements on grounds of sexual orientation". They said the group was "incompatible with the position of the Co-operative Bank, which publicly supports diversity and dignity". Christian Voice said the bank was discriminating against it on religious grounds. Gay Times
Gay Times
Gay Times is one of the United Kingdom's leading gay magazine for gay and bisexual men.-Publication and content:...
subsequently selected the Co-operative Bank for its Ethical Corporate Stance Award.
The source of this article is wikipedia, the free encyclopedia.  The text of this article is licensed under the GFDL.