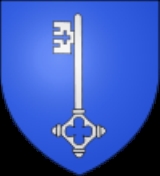 Encyclopedia
Cluny or Clungy is a commune
Communes of France
The commune is the lowest level of administrative division in the French Republic. French communes are roughly equivalent to incorporated municipalities or villages in the United States or Gemeinden in Germany...
in the Saône-et-Loire
Saône-et-Loire
Saône-et-Loire is a French department, named after the Saône and the Loire rivers between which it lies.-History:When it was formed during the French Revolution, as of March 4, 1790 in fulfillment of the law of December 22, 1789, the new department combined parts of the provinces of southern...
department in the region
Régions of France
France is divided into 27 administrative regions , 22 of which are in Metropolitan France, and five of which are overseas. Corsica is a territorial collectivity , but is considered a region in mainstream usage, and is even shown as such on the INSEE website...
of Bourgogne
Bourgogne
Burgundy is one of the 27 regions of France.The name comes from the Burgundians, an ancient Germanic people who settled in the area in early Middle-age. The region of Burgundy is both larger than the old Duchy of Burgundy and smaller than the area ruled by the Dukes of Burgundy, from the modern...
in eastern France
France
The French Republic , The French Republic , The French Republic , (commonly known as France , is a unitary semi-presidential republic in Western Europe with several overseas territories and islands located on other continents and in the Indian, Pacific, and Atlantic oceans. Metropolitan France...
. It is 20 km northwest of Mâcon
Mâcon
Mâcon is a small city in central France. It is prefecture of the Saône-et-Loire department, in the region of Bourgogne, and the capital of the Mâconnais district. Mâcon is home to over 35,000 residents, called Mâconnais.-Geography:...
.

The town grew up around the Benedictine
Benedictine
Benedictine refers to the spirituality and consecrated life in accordance with the Rule of St Benedict, written by Benedict of Nursia in the sixth century for the cenobitic communities he founded in central Italy. The most notable of these is Monte Cassino, the first monastery founded by Benedict...
Cluny Abbey
Cluny Abbey
Cluny Abbey is a Benedictine monastery in Cluny, Saône-et-Loire, France. It was built in the Romanesque style, with three churches built in succession from the 10th to the early 12th centuries....
, founded by Duke William I of Aquitaine
William I of Aquitaine
William I , called the Pious, was the Count of Auvergne from 886 and Duke of Aquitaine from 893, succeeding the Poitevin ruler Ebalus Manser. He made numerous monastic foundations, most important among them the foundation of Cluny Abbey on 11 September 910.William was the son of Bernard II of...
in 910. The height of Cluniac influence was from the second half of the 10th century through the early 12th.

The abbey was sacked by the Huguenots in 1562 and many of the valuable manuscripts were destroyed or removed.

The river Grosne
Grosne River
The Grosne is a long river in the Rhône and Saône-et-Loire départements, central eastern France. Its source is near Saint-Bonnet-des-Bruyères. It flows generally north...
flows northward through the commune and crosses the town.