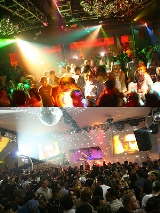 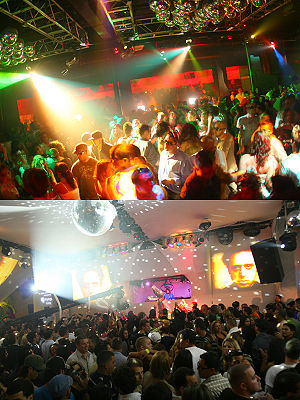 Club Space is a large nightclub located in the downtown area of Miami, Florida, owned by Louis Puig.

In the nine years of operation, Space has resided in two buildings. The first was a one-story renovated warehouse, consisting of three rooms, as well as an outdoor patio area, which was one of the primary reasons the venue was made famous. From March 17, 2000, until April, 2003, Club Space played host to some innovative parties for the Miami dance music scene, including marathon sets from Danny Tenaglia
Danny Tenaglia
Danny Tenaglia is a New York-based DJ and Grammy nominated record producer.-Early life:At the age of ten, Tenaglia first started to collect records. In 1979 he began going to nightclub Paradise Garage, where DJ Larry Levan's genre-less blend of music appealed to him...
and Paul Van Dyk
Paul van Dyk
Matthias Paul, better known by his stage name Paul van Dyk is a German Grammy Award-winning Electronic Dance Music DJ, musician and record producer...
. Noted Miami producer Oscar G
Murk
Murk may refer to:* Murk , Cuban-American house music duo* Murk , its 2004 self-titled release* Murk , 2005 Danish thriller by Jannik Johansen and Anders Thomas Jensen...
also acquired his long-running residency at this building.

Due to capacity issues, the venue was then moved to a larger warehouse and briefly renamed Space 34, before returning to simply being called Space. In its current configuration, (the building has radically changed its layout many times) Space is a 3-room, 25000 square feet (2,322.6 m²) complex, consisting of a large main room with a significant VIP
Bottle service
Bottle service is the sale of liquor by the bottle in bars and nightclubs.The purchase of bottle service typically includes a reserved table for the patron's party and mixers of the patron's choice. Bottle service can include the service of a VIP host, who will ensure that patrons have sufficient...
area, an upstairs loft, as well as a rooftop patio
Patio
A patio is an outdoor space generally used for dining or recreation that adjoins a residence and is typically paved. It may refer to a roofless inner courtyard of the sort found in Spanish-style dwellings or a paved area between a residence and a garden....
which plays host to daytime parties. Often, guest DJs will play the main room, and then continue their sets upstairs on the patio.

Quarterly & Bi-Montly Guests:
Deep Dish
Deep Dish
Deep Dish is a duo of DJs and house-music producers consisting of Iranian-American members Ali "Dubfire" Shirazinia and Sharam Tayebi. Based in Washington, D.C., Shirazinia and Tayebi are well known for providing house or dance remixes of tracks of famous stars such as Madonna, Cher and Gabrielle,...
, Paul Van Dyk
Paul van Dyk
Matthias Paul, better known by his stage name Paul van Dyk is a German Grammy Award-winning Electronic Dance Music DJ, musician and record producer...
, Sander Kleinenberg, Ferry Corsten
Ferry Corsten
Ferry Corsten, also known under the alias System F, is a Dutch producer of trance music, in addition to being a DJ and remixer. He also hosts his own weekly radio show, Corsten's Countdown. He routinely plays at events all over the world with crowds in excess of tens of thousands. In 2009 Ferry...
, Nic Fanciulli.