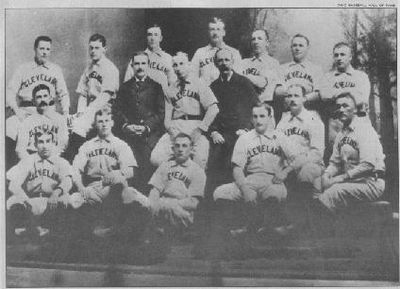 The Spiders first fielded a team in the American Association
American Association (19th century)
The American Association was a Major League Baseball league that existed for 10 seasons from to . During that time, it challenged the National League for dominance of professional baseball...
(then a major league) in 1887. At the time, they were known as the Cleveland Forest Citys or Cleveland Blues. The team was organized by Frank Robison
Frank Robison
Frank DeHass Robison was an American businessman, best known as a baseball executive. He was the organizer of the Cleveland Spiders franchise, and owned or part-owned the club throughout its existence, from its founding in as the Cleveland Blues until...
, who eventually brought his brother Stanley
Stanley Robison
Martin Stanford "Stanley" Robison was an American owner and manager in Major League Baseball. Robison was the owner of the St. Louis Cardinals from 1899 to 1911, along with his brother Frank. He was also part-owner of the Cleveland Spiders for most of their existence, from 1887 to 1899...
aboard to help run the club.

The Forest Citys were a weak team in their early years. In , they moved to the National League
National League
The National League of Professional Baseball Clubs, known simply as the National League , is the older of two leagues constituting Major League Baseball, and the world's oldest extant professional team sports league. Founded on February 2, 1876, to replace the National Association of Professional...
and became known as the Spiders. They started to improve in , largely due to the signing of future Baseball Hall of Fame pitcher
Pitcher
In baseball, the pitcher is the player who throwsthe baseball from the pitcher's mound toward the catcher to begin each play, with the goal of retiring a batter, who attempts to either make contact with the pitched ball or draw a walk. In the numbering system used to record defensive plays, the...
Cy Young
Cy Young
Denton True "Cy" Young was an American Major League Baseball pitcher. During his 22-year baseball career , he pitched for five different teams. Young was elected to the National Baseball Hall of Fame in 1937...
.

The Spiders had their first taste of success in 1892 when they finished 93-56 overall; winning the second half by three games over Boston with a 53-23 record. Other than standout second baseman
Second baseman
Second base, or 2B, is the second of four stations on a baseball diamond which must be touched in succession by a base runner in order to score a run for that player's team. A second baseman is the baseball player guarding second base...
Cupid Childs
Cupid Childs
Clarence Algernon "Cupid" Childs was an American second baseman in Major League Baseball with a 13-season career from 1888, 1890–1901, playing for the Philadelphia Quakers, Cleveland Spiders, St. Louis Perfectos and Chicago Orphans of the National League and the Syracuse Stars of the American...
, the Spiders had an unremarkable offense. Their success in 1892 was built on pitching strength; Young was the NL's most dominant hurler, and 22-year-old Nig Cuppy
Nig Cuppy
George Joseph "Nig" Cuppy was an American baseball pitcher during the 1890s. He spent nine years of his 10-year major league career as the number two starter behind Cy Young....
had an outstanding rookie
Rookie
Rookie is a term for a person who is in his or her first year of play of their sport or has little or no professional experience. The term also has the more general meaning of anyone new to a profession, training or activity Rookie is a term for a person who is in his or her first year of play of...
year. Following the season, a "World's Championship Series" exhibition was played between Cleveland and the first-half winner Boston Beaneaters
Atlanta Braves
The Atlanta Braves are a professional baseball club based in Atlanta, Georgia. The Braves are a member of the Eastern Division of Major League Baseball's National League. The Braves have played in Turner Field since 1997....
, but the Spiders could only muster one tie in six games.

In 1895, the Spiders again finished second, this time to the equally rough-and-tumble Baltimore Orioles
Baltimore Orioles (19th century)
The Baltimore Orioles were a 19th-century American Association and National League team from 1882 to 1899. The club, which featured numerous future Hall of Famers, finished in first place three consecutive years and won the Temple Cup championship in 1896 and 1897...
. Young again led the league in wins
Win (baseball)
In professional baseball, there are two types of decisions: a win and a loss . In each game, one pitcher on the winning team is awarded a win and one pitcher on the losing team is given a loss in their respective statistics. These pitchers are collectively known as the pitchers of record. Only...
, and speedy left fielder
Left fielder
In baseball, a left fielder is an outfielder who plays defense in left field. Left field is the area of the outfield to the left of a person standing at home plate and facing towards the pitcher's mound...
Jesse Burkett
Jesse Burkett
Jesse Cail Burkett , nicknamed "The Crab", was a Major League Baseball player at the turn of the 20th century...
won the batting title
Batting average
Batting average is a statistic in both cricket and baseball that measures the performance of cricket batsmen and baseball hitters. The two statistics are related in that baseball averages are directly descended from the concept of cricket averages.- Cricket :...
with a .409 average. The Spiders won the Temple Cup
Temple Cup
The Temple Cup was a trophy awarded to the winner of a best-of-seven, post-season championship series in the National League, from 1894–1897. The 30-inch-high silver cup was donated by coal, citrus, and lumber baron William Chase Temple, the owner of the Pittsburgh Pirates at the time...
, an 1890s postseason series between the first- and second-place teams in the NL. Amid fan rowdyism and garbage-throwing, the Spiders won four of five games against Baltimore, including two wins for Cy Young.

The 1895 championship was the high water mark for the franchise. The following season, Baltimore and Cleveland again finished first and second in the NL, but in the battle for the 1896 Temple Cup, the second-place Spiders were swept in four games. In 1897, despite a winning record, the franchise finished fifth, a season highlighted by Young throwing the first of three career no-hitter
No-hitter
A no-hitter is a baseball game in which one team has no hits. In Major League Baseball, the team must be without hits during the entire game, and the game must be at least nine innings. A pitcher who prevents the opposing team from achieving a hit is said to have "thrown a no-hitter"...
s on September 18. The Spiders again finished fifth in 1898.

In 1899, the Spiders' owners, the Robison brothers bought the St. Louis Browns
St. Louis Cardinals
The St. Louis Cardinals are a professional baseball team based in St. Louis, Missouri. They are members of the Central Division in the National League of Major League Baseball. The Cardinals have won eleven World Series championships, the most of any National League team, and second overall only to...
out of bankruptcy and changed their name to the Perfectos. Believing the Perfectos would draw greater attendance in more densely populated St. Louis, the Robisons transferred most of the Cleveland stars, including future Baseball Hall of Famers Cy Young, Jesse Burkett, and Bobby Wallace
Bobby Wallace (baseball)
Rhoderick John "Bobby" Wallace was a Major League Baseball pitcher, infielder, manager, umpire and scout....
, to St. Louis. They also shifted a large number of Cleveland home games to the road (for instance, the original Opening Day
Opening Day
Opening Day is the day on which professional baseball leagues begin their regular season. For Major League Baseball and most of the minor leagues, this day falls during the first week of April. For baseball fans, Opening Day serves as a symbol of rebirth; writer Thomas Boswell once penned a book...
game was shifted to St. Louis). In 1900, the St. Louis Perfectos changed their name to the Cardinals, the name they use to this day.

With a decimated roster, the Spiders made a wretched showing. They finished 20-134 (.130), the worst in baseball history. The Spiders finished 84 games behind the pennant-winning Brooklyn Superbas
Los Angeles Dodgers
The Los Angeles Dodgers are a professional baseball team based in Los Angeles, California. The Dodgers are members of Major League Baseball's National League West Division. Established in 1883, the team originated in Brooklyn, New York, where it was known by a number of nicknames before becoming...
and 35 games behind the next-to-last (11th) place Washington Senators
Washington Senators (1891-1899)
The Washington Senators were a 19th century baseball team. The team was also known as the Washington Statesmen and the Washington Nationals. The team played at Boundary Field....
.

The Spiders' first 16 home games drew a total of 3,049 fans, or 199 fans per game. Due to the wretched attendance figures, the other NL teams refused to come to League Park, as their cut of the revenue wasn't nearly enough to cover their hotel and travel expenses. The Spiders were thus forced to play 85 of their remaining 93 games on the road. The team played only 42 home games during the season, including only eight after July 1.

The 1962 New York Mets
New York Mets
The New York Mets are a professional baseball team based in the borough of Queens in New York City, New York. They belong to Major League Baseball's National League East Division. One of baseball's first expansion teams, the Mets were founded in 1962 to replace New York's departed National League...
, 40-120 (.250), and 2003 Detroit Tigers
Detroit Tigers
The Detroit Tigers are a Major League Baseball team located in Detroit, Michigan. One of the American League's eight charter franchises, the club was founded in Detroit in as part of the Western League. The Tigers have won four World Series championships and have won the American League pennant...
, 43-119 (.265), own the modern records in their respective leagues for the most losses, and thus draw frequent comparisons to the 1899 Spiders for futility.

The Robisons' decision to essentially reduce the Spiders to minor league
Minor league baseball
Minor league baseball is a hierarchy of professional baseball leagues in the Americas that compete at levels below Major League Baseball and provide opportunities for player development. All of the minor leagues are operated as independent businesses...
standards, along with other intra-league raiding such as that conducted by the Dodgers, unwittingly helped pave the way to the National League's loss of its major league monopoly. The 12th-place Spiders were one of four teams contracted out of the National League at the end of the 1899 season. The others were the 11th-place Senators, the ninth-place Louisville Colonels
Louisville Colonels
The Louisville Colonels were a Major League Baseball team that played in the American Association throughout that league's ten-year existence from 1882 until 1891, first as the Louisville Eclipse and later as the Louisville Colonels , the latter name derived from the historic Kentucky colonels...
and, surprisingly, the fourth-place Baltimore Orioles
Baltimore Orioles (19th century)
The Baltimore Orioles were a 19th-century American Association and National League team from 1882 to 1899. The club, which featured numerous future Hall of Famers, finished in first place three consecutive years and won the Temple Cup championship in 1896 and 1897...
.