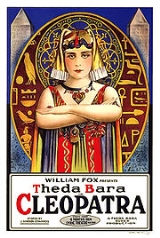 Encyclopedia
Cleopatra was directed by J. Gordon Edwards
J. Gordon Edwards
J. Gordon Edwards was a Canadian-born film director, producer, and a writer who began his career as a stage actor and as a stage director. He made his directorial debut on film in 1914's St. Elmo. Soon went on helming all of the Fox studio's mega-budget spectacles, including all of actress Theda...
and starred Theda Bara
Theda Bara
Theda Bara , born Theodosia Burr Goodman, was an American silent film actress – one of the most popular of her era, and one of cinema's earliest sex symbols. Her femme fatale roles earned her the nickname "The Vamp" . The term "vamp" soon became a popular slang term for a sexually predatory woman...
in the title role. Fritz Leiber, Sr.
Fritz Leiber, Sr.
Fritz Reuter Leiber Sr. , was an was a American actor . Highly respected as a Shakespearean actor on stage, he also had a successful career in film...
played Julius Caesar
Julius Caesar
Gaius Julius Caesar was a Roman general and statesman and a distinguished writer of Latin prose. He played a critical role in the gradual transformation of the Roman Republic into the Roman Empire....
and Thurston Hall
Thurston Hall
Thurston Hall was an American film actor. He appeared in 250 films between 1915 and 1957 and is probably best remembered for his portrayal, during the later stages of his career, of often pompous or blustering authority figures.Hall's best-known television role was as Mr. Schuyler, the boss of...
played Mark Antony
Mark Antony
Marcus Antonius , known in English as Mark Antony, was a Roman politician and general. As a military commander and administrator, he was an important supporter and loyal friend of his mother's cousin Julius Caesar...
.

It was one of the most elaborate Hollywood films ever produced up to that time, with particularly lavish sets and costumes. According to the studio, the film cost $500,000 (approximately $8.3 million in 2009) to make and employed 2,000 people behind the scenes. The story of this silent film
Silent film
A silent film is a film with no synchronized recorded sound, especially with no spoken dialogue. In silent films for entertainment the dialogue is transmitted through muted gestures, pantomime and title cards...
was very loosely based on the plot of William Shakespeare
William Shakespeare
William Shakespeare was an English poet and playwright, widely regarded as the greatest writer in the English language and the world's pre-eminent dramatist. He is often called England's national poet and the "Bard of Avon"...
's Antony and Cleopatra
Antony and Cleopatra
Antony and Cleopatra is a tragedy by William Shakespeare, believed to have been written sometime between 1603 and 1607. It was first printed in the First Folio of 1623. The plot is based on Thomas North's translation of Plutarch's Lives and follows the relationship between Cleopatra and Mark Antony...
. Theda Bara appeared in a variety of fantastic costumes, some quite risqué. The film was a great success at the time.

However, years later, with the imposition of Hollywood's Hays Code, the film was judged too obscene
Obscenity
An obscenity is any statement or act which strongly offends the prevalent morality of the time, is a profanity, or is otherwise taboo, indecent, abhorrent, or disgusting, or is especially inauspicious...
to be shown. The last two prints known were destroyed in fires at the Fox studios and at the Museum of Modern Art
Museum of Modern Art
The Museum of Modern Art is an art museum in Midtown Manhattan in New York City, on 53rd Street, between Fifth and Sixth Avenues. It has been important in developing and collecting modernist art, and is often identified as the most influential museum of modern art in the world...
in New York
New York
New York is a state in the Northeastern region of the United States. It is the nation's third most populous state. New York is bordered by New Jersey and Pennsylvania to the south, and by Connecticut, Massachusetts and Vermont to the east...
. Only a few fragments in the hands of museums survive to this day.