Encyclopedia
Clear air turbulence (CAT) is the turbulent
Turbulence
In fluid dynamics, turbulence or turbulent flow is a flow regime characterized by chaotic and stochastic property changes. This includes low momentum diffusion, high momentum convection, and rapid variation of pressure and velocity in space and time...
movement of air masses in the absence of any visual cues such as clouds, and is caused when bodies of air moving at widely different speeds meet.

The atmospheric region most susceptible to CAT is the high troposphere
Troposphere
The troposphere is the lowest portion of Earth's atmosphere. It contains approximately 80% of the atmosphere's mass and 99% of its water vapor and aerosols....
at altitudes of around 7000–12000 m (22,965.9–39,370.1 ft) as it meets the tropopause
Tropopause
The tropopause is the atmospheric boundary between the troposphere and the stratosphere.-Definition:Going upward from the surface, it is the point where air ceases to cool with height, and becomes almost completely dry...
. Here CAT is most frequently encountered in the regions of jet stream
Jet stream
Jet streams are fast flowing, narrow air currents found in the atmospheres of some planets, including Earth. The main jet streams are located near the tropopause, the transition between the troposphere and the stratosphere . The major jet streams on Earth are westerly winds...
s. At lower altitudes it may also occur near mountain ranges. Thin cirrus cloud
Cirrus cloud
Cirrus clouds are atmospheric clouds generally characterized by thin, wispy strands, giving them their name from the Latin word cirrus meaning a ringlet or curling lock of hair...
can also indicate high probability of CAT.

CAT can be hazardous to the comfort, and even safety, of air travel.

Clear air turbulence is usually impossible to detect with the naked eye and very difficult to detect with conventional radar
Radar
Radar is an object-detection system which uses radio waves to determine the range, altitude, direction, or speed of objects. It can be used to detect aircraft, ships, spacecraft, guided missiles, motor vehicles, weather formations, and terrain. The radar dish or antenna transmits pulses of radio...
, with the result that it is difficult for aircraft pilots to detect and avoid it. However, it can be remotely detected with instruments that can measure turbulence with optical techniques, such as scintillometer
Scintillometer
A scintillometer is a scientific device used to measure small fluctuations of the refractive index of air caused by variations in temperature, humidity, and pressure. It consists of an optical or radio wave transmitter and a receiver at both ends of an atmospheric propagation path...
s or Doppler
Doppler effect
The Doppler effect , named after Austrian physicist Christian Doppler who proposed it in 1842 in Prague, is the change in frequency of a wave for an observer moving relative to the source of the wave. It is commonly heard when a vehicle sounding a siren or horn approaches, passes, and recedes from...
LIDAR
LIDAR
LIDAR is an optical remote sensing technology that can measure the distance to, or other properties of a target by illuminating the target with light, often using pulses from a laser...
s.

Although the altitudes near the tropopause are usually cloudless, thin cirrus cloud
Cirrus cloud
Cirrus clouds are atmospheric clouds generally characterized by thin, wispy strands, giving them their name from the Latin word cirrus meaning a ringlet or curling lock of hair...
can form where there are abrupt changes of air velocity, for example associated with jet streams. Lines of cirrus perpendicular to the jet stream indicate possible CAT, especially if the ends of the cirrus are dispersed in which case the direction of dispersal can indicate if the CAT is stronger at the left or at the right of the jet stream.

Detecting and predicting CAT is hard for meteorologists because it is at such heights that even when caused by factors that can be measured, intensity and location cannot be determined precisely. However because this turbulence affects long range aircraft that fly near the tropopause, CAT has been intensely studied. Several factors affect that likelihood of CAT. Often more than one factor is present. 64% of the non-light turbulences (not only CAT) are observed less than 150 nautical miles (277.8 km) away from the core of a jet stream.

A jet stream
Jet stream
Jet streams are fast flowing, narrow air currents found in the atmospheres of some planets, including Earth. The main jet streams are located near the tropopause, the transition between the troposphere and the stratosphere . The major jet streams on Earth are westerly winds...
alone will rarely be the cause of CAT, although there is horizontal wind shear at its edges and within it caused by the different relative air speeds of the stream and the surrounding air.

Rossby waves caused by this jet stream shear and the Coriolis force cause it to meander.

A horizontal temperature gradient may occur, and hence air density variations, where air velocity changes. An example: the speed of the jet stream is not constant along its length; additionally air temperature and hence density will vary between the air within the jet stream and the air outside.

Wind shear
Wind shear
Wind shear, sometimes referred to as windshear or wind gradient, is a difference in wind speed and direction over a relatively short distance in the atmosphere...
is a difference in relative speed between two adjacent air masses. An excessive wind shear produces vortexes, and when the wind shear is of sufficient degree the air will tend to move chaotically. As is explained elsewhere in this article, temperature decreases and wind velocity increase with height in the troposphere, and the reverse is true within the stratosphere. These differences cause changes in air density, and hence viscosity. The viscosity of the air thus presents both inertias and accelerations which cannot be determined in advance.

When strong wind deviates, the change of wind direction implies a change in the wind speed. A stream of wind can change its direction by differences of pressure. CAT appears more frequently when the wind is surrounding a low pressure region, especially with sharp troughs that change the wind direction more than 100º. Extreme CAT has been reported without any other factor than this.

Mountain waves are formed when four requirements are met. When these factors coincide with jet streams, CAT can occur:

The tropopause is a layer which separates two very different types of air. Beneath it the air gets colder and the wind gets faster with height. Above it the air warms and wind velocity decreases with height. These changes in temperature and velocity can produce fluctuation in the altitude of the tropopause, called gravity wave
Gravity wave
In fluid dynamics, gravity waves are waves generated in a fluid medium or at the interface between two media which has the restoring force of gravity or buoyancy....
s.

In the context of air flight, CAT is sometimes colloquially referred to as "air pockets".

Standard airplane radars cannot detect CAT, as CAT is not associated with clouds that show unpredictable movement of the air. Airlines and pilots should be aware of factors that cause or indicate CAT in order to reduce the probability of meeting turbulence, as it can injure crew and passengers and even affect flight safety.

Aircraft in level flight rely on a constant air density to retain stability. Where air density is significantly different, for instance because of temperature gradient, especially at the tropopause, CAT can occur.

Because the altitude of the tropopause is not constant, an airplane that flies at a constant altitude would traverse it and encounter any associated CAT.

When a pilot experiences CAT, a number of rules should be applied:

Because aircraft move so quickly, they can experience sudden unexpected accelerations or 'bumps' from turbulence, including CAT (as they rapidly cross invisible bodies of air which are moving vertically at many different speeds). Cabin crew and passengers on aircraft have been injured (and in a small number of cases, killed, as in the case of a United Airlines Flight 826 on December 28, 1997) when tossed around inside an aircraft cabin during extreme turbulence. BOAC Flight 911
BOAC flight 911
BOAC Flight 911 was a round-the-world flight operated by British Overseas Airways Corporation.On 5 March 1966, the Boeing 707-436 operating this flight was commanded by Captain Bernard Dobson, 45, from Dorset, an experienced 707 pilot who had been flying these aircraft since November 1960.The...
broke-up in flight in 1966 after experiencing severe lee wave turbulence just downwind of Mount Fuji
Mount Fuji
is the highest mountain in Japan at . An active stratovolcano that last erupted in 1707–08, Mount Fuji lies about south-west of Tokyo, and can be seen from there on a clear day. Mount Fuji's exceptionally symmetrical cone is a well-known symbol of Japan and it is frequently depicted in art and...
, Japan
Japan
Japan is an island nation in East Asia. Located in the Pacific Ocean, it lies to the east of the Sea of Japan, China, North Korea, South Korea and Russia, stretching from the Sea of Okhotsk in the north to the East China Sea and Taiwan in the south...
. 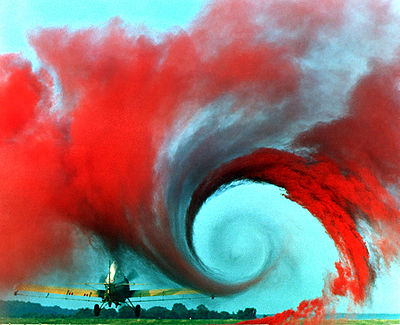 Wake turbulence
Wake turbulence
Wake turbulence is turbulence that forms behind an aircraft as it passes through the air. This turbulence includes various components, the most important of which are wing vorticies and jetwash. Jetwash refers simply to the rapidly moving gases expelled from a jet engine; it is extremely turbulent,...
is another dangerous type of clear-air turbulence, but in this case the causes are quite different to those set out above. in the case of wake turbulence, the rotating vortex-pair created by the wings of a large aircraft as it travels lingers for a significant amount of time after the passage of the aircraft, sometimes more than a minute. When this occurs, the lingering turbulence caused by the wake of the wing tips can deflect or even flip a smaller aircraft on the ground or in the air. this phenomenon can also lead to accidents with large aircraft as well. Delta Air Lines Flight 9570
Delta Air Lines Flight 9570
Delta Air Lines Flight 9570 crashed on 30 May 1972 at the Greater Southwest International Airport in Fort Worth, Texas while conducting a training flight. The aircraft, a McDonnell Douglas DC-9-14, began to oscillate about the roll axis after crossing the runway threshold during a landing...
crashed at the Greater Southwest International Airport
Greater Southwest International Airport
Greater Southwest International Airport was the commercial airport serving Fort Worth, Texas from 1953 until 1972. Dallas-Fort Worth International Airport opened in 1974 on property adjacent to the north side of the airport.-Early history:...
in 1972 while landing behind a DC-10
McDonnell Douglas DC-10
The McDonnell Douglas DC-10 is a three-engine widebody jet airliner manufactured by McDonnell Douglas. The DC-10 has range for medium- to long-haul flights, capable of carrying a maximum 380 passengers. Its most distinguishing feature is the two turbofan engines mounted on underwing pylons and a...
. This accident lead to new rules for minimum following separation time from "heavy" aircraft. American Airlines Flight 587
American Airlines Flight 587
American Airlines Flight 587, an Airbus A300, crashed into the Belle Harbor neighborhood of Queens, a borough of New York City, New York, shortly after takeoff from John F. Kennedy International Airport on November 12, 2001. This is the second deadliest U.S...
crashed shortly after takeoff from John F. Kennedy International Airport
John F. Kennedy International Airport
John F. Kennedy International Airport is an international airport located in the borough of Queens in New York City, about southeast of Lower Manhattan. It is the busiest international air passenger gateway to the United States, handling more international traffic than any other airport in North...
in 2001 due to pilot overreaction to wake turbulence from a Boeing 747
Boeing 747
The Boeing 747 is a wide-body commercial airliner and cargo transport, often referred to by its original nickname, Jumbo Jet, or Queen of the Skies. It is among the world's most recognizable aircraft, and was the first wide-body ever produced...
.