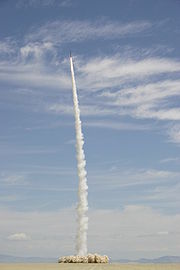 The Civilian Space eXploration Team, known as CSXT, is a team of around 30 civilians interested in private spaceflight
Spaceflight
Spaceflight is the act of travelling into or through outer space. Spaceflight can occur with spacecraft which may, or may not, have humans on board. Examples of human spaceflight include the Russian Soyuz program, the U.S. Space shuttle program, as well as the ongoing International Space Station...
. The team was created by Ky Michaelson. It has conducted multiple rocket launches in an attempt to establish altitude records. CSXT claims to be the first entity to officially launch an amateur rocket into space.

Prior privately-funded space launches were achieved by the Orbital Sciences Pegasus
Pegasus rocket
The Pegasus rocket is a winged space launch vehicle capable of carrying small, unmanned payloads into low Earth orbit. It is air-launched, as part of an expendable launch system developed by Orbital Sciences Corporation . Three main stages burning solid propellant provide the thrust...
, and many amateur teams have made unverified claims of rocket flights exceeding the boundary of space.

The team was established in 1995 by a group of model rocket
Model rocket
A model rocket is a small rocket that is commonly advertised as being able to be launched by anybody, to, in general, low altitudes and recovered by a variety of means....
hobbyists interested in spaceflight. The team is supported by corporate sponsorship.

Currently Ky Michaelson is the program director. CSXT's program is subdivided into three teams:
Each team works together to design the rocket.

The D.R. Hero rocket was launched in August 1995. It was dedicated to stuntman Dar Robinson
Dar Robinson
Dar Allen Robinson was an American stunt performer and actor. Robinson broke 19 world records and set 21 "world's firsts." He invented the decelerator which allowed a cameraman to film a top-down view of the stuntman as he fell without accidentally...
, a late friend of Ky Michaelson. The rocket was 18 feet (5 m) tall and 6 inches in diameter. It was anticipated to reach 100000 feet (30,480 m). The actual launch height was not reported. This rocket failed in a large CATO (Catastrophe At Take Off) just above the ground.

Launched in August 1996 this rocket, was also 18 feet (5 m) tall and 6 inches in diameter. The name of the Rocket is attributed the largest contributing sponsor, Joe Boxer. It was anticipated to reach 70000 feet (21,336 m), however, the actual height obtained was only 66000 feet (20,116.8 m). The entire rocket was recovered after what was considered a successful flight. All of the rocket's systems functioned as intended and this was claimed to be the first amateur rocket to be recovered intact after reaching more than 50000 feet (15,240 m).

This slightly smaller rocket was 17 feet (5 m) tall and 6 inches in diameter, with an upper stage dart, only 3 or 4 inches across. It was the first two stage rocket launched by CSXT, and was expected to reach 400000 feet (121,920 m). The rocket was a P 13,500 first stage as booster for a N motor upper stage. This would have been the largest high performance two stage flight in the history of hobby rocketry, beating by double the O 10,000 to M Kosdon flights. During the launch, an electronics failure prevented the ignition of the second stage, though the first stage successfully detached, and was recovered with a parachute.

This rocket was launched on September 21st, 2002. It was launched at the Black Rock Desert
Black Rock Desert
The Black Rock Desert is an arid region in the northern Nevada section of the Great Basin with a lakebed that is a dry remnant of Pleistocene Lake Lahontan...
in Nevada. The rocket was equipped with a solid-propellant motor. The motor was to launch the rocket into space in just 15 seconds, after obtaining speeds as fast as Mach 5. The rocket was equipped with GPS receivers and antennas, video recording devices, and a series of flight monitoring devices. Three seconds after the rocket launched the motor burned through the casing causing the rocket to fail.

The rocket launched on Monday May 17, 2004. The rocket was 21 feet (6 m) tall and 10 inches in diameter. This rocket was the first amateur rocket to exceed 100 kilometers or 62 miles, the official boundary of space
Karman line
The Kármán line lies at an altitude of above the Earth's sea level, and is commonly used to define the boundary between the Earth's atmosphere and outer space...
. It was launched at the Black Rock Desert
Black Rock Desert
The Black Rock Desert is an arid region in the northern Nevada section of the Great Basin with a lakebed that is a dry remnant of Pleistocene Lake Lahontan...
. The team that built the rocket was estimated at about 25 people. The rocket reached 4200 mi/h in 10 seconds, and reached an estimated altitude of 72 miles (116 km). The avionics were recovered by deployment of a parachute.

The final verified altitude was released as 72 miles (116 km).