Encyclopedia
A civil registrar ceremony is a non-religious legal marriage
Marriage
Marriage is a social union or legal contract between people that creates kinship. It is an institution in which interpersonal relationships, usually intimate and sexual, are acknowledged in a variety of ways, depending on the culture or subculture in which it is found...
ceremony performed by a government official or functionary. In the UK, this person is normally called a registrar
Register office
A register office is a British term for a civil registry, a government office and depository where births, deaths and marriages are officially recorded and where you can get officially married, without a religious ceremony...
. In American
United States
The United States of America is a federal constitutional republic comprising fifty states and a federal district...
jurisdictions, civil registrar ceremonies may be performed by town, city and county clerks, judges
Judge
A judge is a person who presides over court proceedings, either alone or as part of a panel of judges. The powers, functions, method of appointment, discipline, and training of judges vary widely across different jurisdictions. The judge is supposed to conduct the trial impartially and in an open...
and justices of the peace
Justice of the Peace
A justice of the peace is a puisne judicial officer elected or appointed by means of a commission to keep the peace. Depending on the jurisdiction, they might dispense summary justice or merely deal with local administrative applications in common law jurisdictions...
, or others possessing legal authority to officiate a marriage. 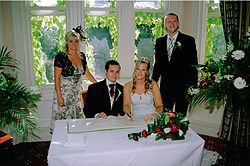 In the UK, a civil registrar ceremony cannot include hymns
Hymn
A hymn is a type of song, usually religious, specifically written for the purpose of praise, adoration or prayer, and typically addressed to a deity or deities, or to a prominent figure or personification...
, religious readings or prayers
Prayer
Prayer is a form of religious practice that seeks to activate a volitional rapport to a deity through deliberate practice. Prayer may be either individual or communal and take place in public or in private. It may involve the use of words or song. When language is used, prayer may take the form of...
, and the marriage
Marriage
Marriage is a social union or legal contract between people that creates kinship. It is an institution in which interpersonal relationships, usually intimate and sexual, are acknowledged in a variety of ways, depending on the culture or subculture in which it is found...
must take place at a registered or licensed venue to be legally valid. Many private premises are licensed to hold civil ceremonies. As well as each party to the marriage signing the register, signatures of two witnesses are also required.

In most American
United States
The United States of America is a federal constitutional republic comprising fifty states and a federal district...
jurisdictions, civil registrar ceremonies are subject to the same requirements as religious ceremonies, including venue reservation fees, marriage license
Marriage license
A marriage license is a document issued, either by a church or state authority, authorizing a couple to marry. The procedure for obtaining a license varies between countries and has changed over time...
fees, and age restrictions. The ceremony may take place in many places, including courthouses, parks, gardens, banquet halls, hotels, and other approved venues. Many venues may also accommodate the reception. Like non-civil ceremonies, the formality and style of the ceremony depend entirely on the tastes of the couple.

Civil Registration of all Births, Deaths & Marriages has been compulsory in Scotland since 1855 when the UK government passed several Acts & Bills, effectively to stop the Scottish Traditional Practice of Legal Weddings being performed by communities.

In 1847, the Scotsman said that "Everybody knows that, by the law of Scotland, the marriage ceremony can be performed with as perfect legal effect by a blacksmith as by a clergyman". And the government wanted to end the Scottish practice of regarding a couple as married if they stated as much in front of witnesses. So Scottish Registration Bills were accompanied by Bills to reform the law of marriage. But this was opposed by the Church of Scotland, concerned that the new civil weddings would discourage people from getting married in church.

In the end, the government dropped the marriage proposals, the session clerks were paid to be registrars, and the Treasury met the cost of the new system. That allowed the bill to be passed by Parliament and approved by Queen Victoria on August 7 1854. The new system of civil registration started on January 1 1855.
http://www.gro-scotland.gov.uk/press/news2004/150ann-press.html

Effectively since 1855, Civil Marriage Ceremonies have not been legal in Scotland except if performed by an employee of the government, usually in a registrars office. These Civil Registrar Ceremonies are completely non-religious and are not the same as Civil Ceremonies.

A Civil Ceremony remains within the local community in Scotland and is performed by a trusted member of the community, on behalf of the family & community involved. A Civil Celebrant will never force upon you or mention their own beliefs at your ceremony, nor will he/she insist that you join any religious or non-religious body in order to secure their services.

A Civil Ceremony can be completely religious, completely non-religious or a little bit of both and can take place almost anywhere the family & community wish (except some religious buildings and churches) at home, in a hotel, at a castle, at sea, in the woods, in the family garden.. ... any location which is special to the person or persons for whom the ceremony is for. A Civil Celebrant allows you to choose readings, poems and music based on your own values, wishes and beliefs. A Civil Ceremony is unique and a Civil Celebrant understands the diversity of all people and his/her services reflect the cultural and social mix which is in our communities today.

A Civil Ceremony is

"A Ceremony that is driven by the wishes, beliefs and values of the person or family, not by the beliefs or ideology of the person conducting it"

In 1973, Civil Ceremonies were legalised, after the government decided that people should not be forced to have religious ceremonies which mark major events in their lives. They should have a choice. Qualified Civil Celebrants have full legal status in their communities.
The source of this article is wikipedia, the free encyclopedia.  The text of this article is licensed under the GFDL.