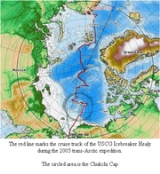 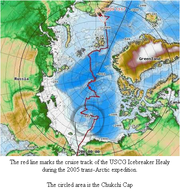 The Chukchi Cap is a large undersea ridge in the Arctic Ocean
Arctic Ocean
The Arctic Ocean, located in the Northern Hemisphere and mostly in the Arctic north polar region, is the smallest and shallowest of the world's five major oceanic divisions...
.
The cap is normally ice-covered, year-round.
The United States Coast Guard Cutter Healy has been sent on multiple missions to map the poorly explored ridge.

The cap lies roughly about 800 kilometres north of the Point Barrow
Point Barrow
Point Barrow or Nuvuk is a headland on the Arctic coast in the U.S. state of Alaska, northeast of Barrow. It is the northernmost point of all the territory of the United States, at...
, Alaska
Alaska
Alaska is the largest state in the United States by area. It is situated in the northwest extremity of the North American continent, with Canada to the east, the Arctic Ocean to the north, and the Pacific Ocean to the west and south, with Russia further west across the Bering Strait...
.
The area is notable because it is believed to be rich in natural resources (especially oil
Oil
An oil is any substance that is liquid at ambient temperatures and does not mix with water but may mix with other oils and organic solvents. This general definition includes vegetable oils, volatile essential oils, petrochemical oils, and synthetic oils....
, natural gas
Natural gas
Natural gas is a naturally occurring gas mixture consisting primarily of methane, typically with 0–20% higher hydrocarbons . It is found associated with other hydrocarbon fuel, in coal beds, as methane clathrates, and is an important fuel source and a major feedstock for fertilizers.Most natural...
and manganese
Manganese
Manganese is a chemical element, designated by the symbol Mn. It has the atomic number 25. It is found as a free element in nature , and in many minerals...
) and it is in disputed waters.

In 2011, scientists aboard sea vessel, Marcus G. Langseth, ran tests to increase understanding of the geology, structure and history of the continental shelves running underwater off Asia and North America, and the Chukchi Borderland, an adjoining region of dramatic deep-sea plateaus and ridges some 800 miles from the North Pole. One test includes sending sound pulses to the seabed and reading the echoes.
The source of this article is wikipedia, the free encyclopedia.  The text of this article is licensed under the GFDL.