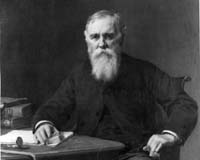 Christopher Columbus Langdell (May 22, 1826 - July 6, 1906), American
United States
The United States of America is a federal constitutional republic comprising fifty states and a federal district...
jurist
Jurist
A jurist or jurisconsult is a professional who studies, develops, applies, or otherwise deals with the law. The term is widely used in American English, but in the United Kingdom and many Commonwealth countries it has only historical and specialist usage...
, was born in the town of New Boston, New Hampshire
New Boston, New Hampshire
New Boston is a town in Hillsborough County, New Hampshire, United States. The population was 5,321 at the 2010 census. New Boston is home to the annual Hillsborough County Agricultural Fair and the Molly Stark Cannon.-History:...
, of English and Scots-Irish ancestry.

Langdell's core legacy is his influence on the legal education
Legal education
Legal education is the education of individuals who intend to become legal professionals or those who simply intend to use their law degree to some end, either related to law or business...
. Before Langdell's tenure, the study of law was a technical pursuit. Students were told what the law is. However, at Harvard Langdell applied the principles of pragmatism
Pragmatism
Pragmatism is a philosophical tradition centered on the linking of practice and theory. It describes a process where theory is extracted from practice, and applied back to practice to form what is called intelligent practice...
to the study of law. Now, as a result of this innovation, lawyers are taught the law through a dialectical process
Socratic method
The Socratic method , named after the classical Greek philosopher Socrates, is a form of inquiry and debate between individuals with opposing viewpoints based on asking and answering questions to stimulate critical thinking and to illuminate ideas...
of inference called the case method
Casebook method
The casebook method, also known as the case method, is the primary method of teaching law in law schools in the United States. It was pioneered at Harvard Law School by Christopher Columbus Langdell...
. The case method has been the primary method of pedagogy at American law schools ever since. The case method has since been adopted and improved upon by schools in other disciplines, such as business, public policy, and education. Students such as Oliver Wendell Holmes, Jr.
Oliver Wendell Holmes, Jr.
Oliver Wendell Holmes, Jr. was an American jurist who served as an Associate Justice of the Supreme Court of the United States from 1902 to 1932...
would ensure that Langdell's innovation would not go unnoticed.

He studied at Phillips Exeter Academy
Phillips Exeter Academy
Phillips Exeter Academy is a private secondary school located in Exeter, New Hampshire, in the United States.Exeter is noted for its application of Harkness education, a system based on a conference format of teacher and student interaction, similar to the Socratic method of learning through asking...
in 1845-1848, at Harvard College
Harvard College
Harvard College, in Cambridge, Massachusetts, is one of two schools within Harvard University granting undergraduate degrees...
in 1848-1850 and at Harvard Law School
Harvard Law School
Harvard Law School is one of the professional graduate schools of Harvard University. Located in Cambridge, Massachusetts, it is the oldest continually-operating law school in the United States and is home to the largest academic law library in the world. The school is routinely ranked by the U.S...
in 1851-1854. He served as one of the Harvard Law School's first librarians, as a student. From 1854 to 1870 he practiced law
Law
Law is a system of rules and guidelines which are enforced through social institutions to govern behavior, wherever possible. It shapes politics, economics and society in numerous ways and serves as a social mediator of relations between people. Contract law regulates everything from buying a bus...
in New York City
New York City
New York is the most populous city in the United States and the center of the New York Metropolitan Area, one of the most populous metropolitan areas in the world. New York exerts a significant impact upon global commerce, finance, media, art, fashion, research, technology, education, and...
, but was almost unknown when, in January 1870, he was appointed Dane Professor of Law at Harvard Law School. Soon after, he became Dean
Dean (education)
In academic administration, a dean is a person with significant authority over a specific academic unit, or over a specific area of concern, or both...
of the Law Faculty, succeeding Theophilus Parsons
Theophilus Parsons (professor)
Theophilus Parsons , was Dane Professor of Law at Harvard from 1848 to 1870. Parsons is remembered chiefly as the author of a series of useful legal treatises and some books in support of Swedenborgian doctrines. He wrote a life of his father, who was also named Theophilus Parsons . It was...
, to whose Treatise on the Law of Contracts (1853) he had contributed as a student.

He resigned the deanship in 1895, in 1900 became Dane Professor emeritus, and on 6 July 1906 died in Cambridge
Cambridge, Massachusetts
Cambridge is a city in Middlesex County, Massachusetts, United States, in the Greater Boston area. It was named in honor of the University of Cambridge in England, an important center of the Puritan theology embraced by the town's founders. Cambridge is home to two of the world's most prominent...
. He received the degree of LL.D. in 1875; in 1903 a chair in the law school was named in his honor; and after his death the school's primary academic building, housing both the world's largest academic law library and classrooms, was named Langdell Hall
Langdell Hall
Langdell Hall is the largest building on the campus of Harvard Law School in Cambridge, Massachusetts. It is home to the school's library, the largest academic law library in the world, and is named for pioneering law school dean Christopher Columbus Langdell...
.

Christopher Langdell made the Harvard Law School a success by remodeling its administration. In a private correspondence of 13 April 1915, Charles Eliot wrote: "the putting of Langdell in charge of the Law School was the best piece of work I did for Harvard University, except the reconstruction of the Medical school in [18]70 and [18]71, and the long fight for the development of the elective system."

Dean Langdell's greatest innovation was his introduction of the case method
Casebook method
The casebook method, also known as the case method, is the primary method of teaching law in law schools in the United States. It was pioneered at Harvard Law School by Christopher Columbus Langdell...
of instruction. Until 1890, no other U.S. law school used this method, which is now standard. Moreover, the standard first-year curriculum at all American law schools — Contracts, Property
Property
Property is any physical or intangible entity that is owned by a person or jointly by a group of people or a legal entity like a corporation...
, Torts, Criminal Law
Criminal law
Criminal law, is the body of law that relates to crime. It might be defined as the body of rules that defines conduct that is not allowed because it is held to threaten, harm or endanger the safety and welfare of people, and that sets out the punishment to be imposed on people who do not obey...
, and Civil Procedure
Civil procedure
Civil procedure is the body of law that sets out the rules and standards that courts follow when adjudicating civil lawsuits...
— stands, mostly unchanged, from the curriculum Langdell instituted.

Langdell, who came from a relatively unknown family, was conscious of the fact that students from more privileged backgrounds often received higher grades in their coursework purely because of their family's wealth and social status. Dean Langdell instituted the process of blind grading, now common at U.S. law schools, so that students already known by professors or from esteemed families would have no advantage over others.