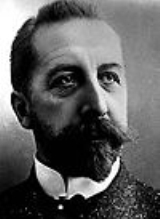 Peter Christian Hersleb Kjerschow Michelsen (15 March 1857 – 29 June 1925) was a Norwegian
Norway
Norway , officially the Kingdom of Norway, is a Nordic unitary constitutional monarchy whose territory comprises the western portion of the Scandinavian Peninsula, Jan Mayen, and the Arctic archipelago of Svalbard and Bouvet Island. Norway has a total area of and a population of about 4.9 million...
shipping magnate and statesman. He was the first Prime Minister of an independent Norway
Prime Minister of Norway
The Prime Minister of Norway is the political leader of Norway and the Head of His Majesty's Government. The Prime Minister and Cabinet are collectively accountable for their policies and actions to the Sovereign, to Stortinget , to their political party, and ultimately the...
from 1905 to 1907. Michelsen is most known for his central role in the dissolution of the union between Norway and Sweden in 1905, and was one of Norway's most influential politicians of his time.

Christian Michelsen was a lawyer and ship-owner. He became a member of the Norwegian Parliament in 1891, representing the Liberal Party. He considered himself mostly above petty party strifes, and one of his major aims was to create a coalition of parties reaching from the Conservative Party to the Liberal Party, which he called the Coalition Party. He became a member of the second cabinet Hagerup
Second cabinet Hagerup
The Hagerup's Second Cabinet governed Norway between 22 October 1903 and 11 March 1905. It fell as the cabinet ministers collectively resigned on 28 February and 1 March 1905, as part of the build-up for the dissolution of the union between Norway and Sweden in 1905. Christian Michelsen withdrew...
, and was one of the strongest proponents of a more firm policy towards the union between Sweden and Norway
Union between Sweden and Norway
The Union between Sweden and Norway , officially the United Kingdoms of Sweden and Norway, consisted of present-day Sweden and Norway between 1814 and 1905, when they were united under one monarch in a personal union....
. In March 1905, Michelsen replaced Francis Hagerup
Francis Hagerup
George Francis Hagerup was a Norwegian lawyer, diplomat and politician for the Conservative Party. He was Prime Minister of Norway from 14 October 1895 to 17 February 1898 and from 22 October 1903 to 11 March 1905.Francis Hagerup grew up in Trondheim...
as Prime Minister, and immediately became the leader of the movement towards dissolution of the union.

The formal basis for the dissolution was King Oscar II
Oscar II of Sweden
Oscar II , baptised Oscar Fredrik was King of Sweden from 1872 until his death and King of Norway from 1872 until 1905. The third son of King Oscar I of Sweden and Josephine of Leuchtenberg, he was a descendant of Gustav I of Sweden through his mother.-Early life:At his birth in Stockholm, Oscar...
's refusal to accept the Norwegian consular laws. The Swedish government had for several years insisted that laws governing foreign affairs had to be a part of the union agreement, and as such, consular laws could not be passed by the Norwegian Storting without consent of the Swedish Riksdag
Parliament of Sweden
The Riksdag is the national legislative assembly of Sweden. The riksdag is a unicameral assembly with 349 members , who are elected on a proportional basis to serve fixed terms of four years...
(parliament). The Swedes were willing to accept the Norwegian urge for separate consular affairs, but they demanded that Norway accept the precedent under which the union had operated for 90 years, namely that the Foreign Minister be Swedish. This, the Norwegians felt, acknowledged Sweden as having the upper hand in the Union. While this supremacy existed in reality, Norwegians were unwilling to accept the unequal relationship on a formal, legal basis.
On 27 May 1905 King Oscar refused to sign the bill, and in response the Norwegian cabinet ministers resigned collectively. The king took no further action, probably aware that a dissolution of the Union was imminent, and the Swedish politicians did nothing, probably believing that this was another Norwegian political retreat. On 7 June the Norwegian Storting declared that because the King had been unable to form a new government in Norway after Michelsen's resignation, he had lost the capacity to rule and hence ceased to be king of Norway. This strategic move gave the dissolution a somewhat legal basis, and was primarily the work of Christian Michelsen.

He knew that the Norwegian people, after months of well-directed information in a unanimous press, was united in a way that is extremely rare in a democracy. In the referendum that proved the Norwegian will to dissolve the union, retention of the union garnered a mere 184 votes nationwide, which represented only one vote out of every 2000 cast.

Michelsen, though a believer in a democratic republic in Norway, accepted that a democratic monarchy would have the greatest chances to be accepted abroad and among a majority of Norwegians. Prince Carl of Denmark became King Haakon VII of Norway
Haakon VII of Norway
Haakon VII , known as Prince Carl of Denmark until 1905, was the first king of Norway after the 1905 dissolution of the personal union with Sweden. He was a member of the House of Schleswig-Holstein-Sonderburg-Glücksburg...
after a new referendum had given the monarchy proponents approximately 79% of the votes cast.

In 1906 Michelsen won the election on an "above-the-parties" ticket, which quickly alienated the leading Liberals from him. In 1907 he resigned, having tired of petty squabbles among the political leaders, and accepting that his political views had been defeated. Jørgen Løvland carried on Michelsen's work, but lacked the will to force the coalition to stand united, and in 1908 the coalition broke down. Michelsen bequeathed a large part of his fortune to the establishment of a foundation for science and intellectual freedom, that later became the Chr. Michelsen Institute
Chr. Michelsen Institute
The Chr. Michelsen Institute was founded in 1930, and is currently the largest centre for development research in Scandinavia. CMI is an independent, non-profit research foundation for policy-oriented and applied development research. Headed by the director Ottar Mæstad, it employs 40 social...
.

His distaste for party politics can be summed in the following quote: "The party congresses are the scene where a number of irresponsible politicians meet to make a tasty stew for the nourishment of their constituents."

In 1925, he, along with the polar explorer Fridtjof Nansen
Fridtjof Nansen
Fridtjof Wedel-Jarlsberg Nansen was a Norwegian explorer, scientist, diplomat, humanitarian and Nobel Peace Prize laureate. In his youth a champion skier and ice skater, he led the team that made the first crossing of the Greenland interior in 1888, and won international fame after reaching a...
and the industrialist Joakim Lehmkuhl
Joakim Lehmkuhl
Joakim Lehmkuhl was a Norwegian engineer, industrialist and politician. He was a co-founder of the organization Fedrelandslaget, and chaired the organization from 1925 to 1939. He was chairman of the board of the newspaper Tidens Tegn from 1936 to 1940. He fled to the United States in 1940...
, founded the Fatherland League.

In recent times, the Chr. Michelsen Institute
Chr. Michelsen Institute
The Chr. Michelsen Institute was founded in 1930, and is currently the largest centre for development research in Scandinavia. CMI is an independent, non-profit research foundation for policy-oriented and applied development research. Headed by the director Ottar Mæstad, it employs 40 social...
(CMI) was established as an independent centre for research on international development and policy. Founded in Bergen in 1930, CMI conducts both applied and theoretical research, and has a multidisciplinary profile anchored in four thematic research groups, namely Human Rights, Democracy and Development, Peace, Conflict and the State, Poverty Reduction and Public Sector Reform.
The source of this article is wikipedia, the free encyclopedia.  The text of this article is licensed under the GFDL.