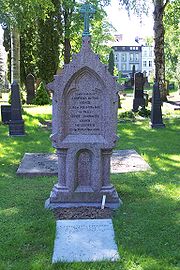 Christian Heinrich Grosch (1801–1865) was a Norwegian
Norway
Norway , officially the Kingdom of Norway, is a Nordic unitary constitutional monarchy whose territory comprises the western portion of the Scandinavian Peninsula, Jan Mayen, and the Arctic archipelago of Svalbard and Bouvet Island. Norway has a total area of and a population of about 4.9 million...
architect
Architect
An architect is a person trained in the planning, design and oversight of the construction of buildings. To practice architecture means to offer or render services in connection with the design and construction of a building, or group of buildings and the space within the site surrounding the...
.

He was born in Halden
Halden
is a both a town and a municipality in Østfold county, Norway. The seat of the municipality, Halden is a border town located at the Tista river delta on the Iddefjord, the southernmost border crossing between Norway and Sweden.-History:...
and educated by his father, Heinrich August Grosch and in Germany
Germany
Germany , officially the Federal Republic of Germany , is a federal parliamentary republic in Europe. The country consists of 16 states while the capital and largest city is Berlin. Germany covers an area of 357,021 km2 and has a largely temperate seasonal climate...
and Copenhagen
Copenhagen
Copenhagen is the capital and largest city of Denmark, with an urban population of 1,199,224 and a metropolitan population of 1,930,260 . With the completion of the transnational Øresund Bridge in 2000, Copenhagen has become the centre of the increasingly integrating Øresund Region...
.

Grosch was Oslo's first "city conductor", which is to say he acted as the city's chief architect, planning engineer, and building inspector. He also accepted private architectural assignments and was responsible for many of the city's landmarks, including Kirkeristen, the first campus at the University of Oslo
University of Oslo
The University of Oslo , formerly The Royal Frederick University , is the oldest and largest university in Norway, situated in the Norwegian capital of Oslo. The university was founded in 1811 and was modelled after the recently established University of Berlin...
, the original building for Norges Bank, Oslo Østbanestasjon and others.

From 1833 to his death in 1865 he was appointed state consultant (Statlig bygningsinspektør) for the royal buildings around Christiania
Oslo
Oslo is a municipality, as well as the capital and most populous city in Norway. As a municipality , it was established on 1 January 1838. Founded around 1048 by King Harald III of Norway, the city was largely destroyed by fire in 1624. The city was moved under the reign of Denmark–Norway's King...
. He was succeeded by Georg Andreas Bull
Georg Andreas Bull
Georg Andreas Bull was a Norwegian architect and chief building inspector in Christiania for forty years. He was among the leading architects in the country, and left his mark on Norwegian building history both as a creative architect, and through his measurement studies and archeological...
. The position is considered as the predecessor of the government agency Statsbygg
Statsbygg
Statsbygg is a Norwegian government agency that manages central parts of the real estate portfolio of the Government of Norway. This includes 2.3 million square meters in 1,500 buildings, of which 115 are located abroad. The portfolio includes office buildings, heritage sites, campuses, operational...
.