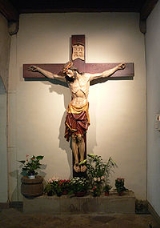 Christendom, or the Christian world, has several meanings. In a cultural
Culture
Culture is a term that has many different inter-related meanings. For example, in 1952, Alfred Kroeber and Clyde Kluckhohn compiled a list of 164 definitions of "culture" in Culture: A Critical Review of Concepts and Definitions...
sense it refers to the worldwide community of Christian
Christian
A Christian is a person who adheres to Christianity, an Abrahamic, monotheistic religion based on the life and teachings of Jesus of Nazareth as recorded in the Canonical gospels and the letters of the New Testament...
s, adherents of Christianity
Christianity
Christianity is a monotheistic religion based on the life and teachings of Jesus as presented in canonical gospels and other New Testament writings...
. In a historical
History
History is the discovery, collection, organization, and presentation of information about past events. History can also mean the period of time after writing was invented. Scholars who write about history are called historians...
or geopolitical
Geopolitics
Geopolitics, from Greek Γη and Πολιτική in broad terms, is a theory that describes the relation between politics and territory whether on local or international scale....
sense the term usually refers collectively to Christian majority countries or countries in which Christianity dominates or was a territorial phenomenon.
The term Christendom is developed from the Latin word Christianus.

Need help plz. I made the mistake asking a question in class and my prof. said that he " didn't know " and he thinks it would be a good idea if I foun...
More
x