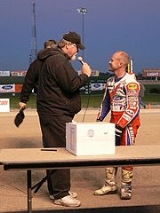 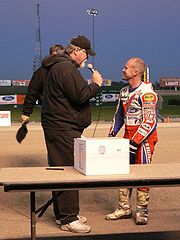 Chris Carr is an American
United States
The United States of America is a federal constitutional republic comprising fifty states and a federal district...
motorcycle
Motorcycle
A motorcycle is a single-track, two-wheeled motor vehicle. Motorcycles vary considerably depending on the task for which they are designed, such as long distance travel, navigating congested urban traffic, cruising, sport and racing, or off-road conditions.Motorcycles are one of the most...
dirt-track
Track racing
Track racing is a form of motorcycle racing where teams or individuals race opponents around an oval track. There are differing variants, with each variant racing on a different surface type....
racer and seven-time winner of the A.M.A. Grand National Championship
A.M.A. Grand National Championship
The AMA Grand National Championship is an American motorcycle racing series. The race series, founded and sanctioned by the American Motorcyclist Association in 1954, originally encompassed five distinct forms of competitions including; mile dirt track races, half-mile, short-track, TT...
. He has also competed as a motorcycle road racer
Road racing
Road racing is a general term for most forms of motor racing held on paved, purpose-built race tracks , as opposed to oval tracks and off-road racing...
at the national level and was a motorcycle land speed world record
Motorcycle land speed record
The motorcycle land speed record is the fastest speed achieved by a motorcycle on land. It is standardized as the speed over a course of fixed length, averaged over two runs in opposite directions. These are special or modified motorcycles, distinct from the fastest production motorcycles. The...
holder.

Carr began his racing career as an amateur racer in 1983. He turned professional in 1985, finishing seventh in the Grand National Championship earning him the A.M.A.
American Motorcyclist Association
The American Motorcyclist Association is an American not-for-profit organization of more than 300,000 motorcyclists that organizes numerous motorcycling activities and campaigns for motorcyclists' legal rights...
Rookie of the Year Award. Carr won his first Grand National in August 1986 at the Peoria TT and finished the season ranked fourth in the championship. He slowly climbed the points standing each year. In 1989, he became a member of the Harley Davidson factory racing team. After finishing second to his Harley Davidson teammate, Scott Parker
Scott Parker (motorcyclist)
Scott Parker is an American professional motorcycle dirt track racer.- Racing career :Parker is a nine-time winner of the A.M.A. Grand National Championship...
in 1990 and 1991, he finally claimed the Grand National Championship in 1992. He ran the Grand National Series full-time until 1995 where he finished third while winning rookie of the year in the AMA Superbike
AMA Superbike
AMA Pro Superbike is the premiere superbike racing series in the United States. It is part of the AMA Pro Racing series which was sold to and is managed by the Daytona Motorsports Group...
road racing
Road racing
Road racing is a general term for most forms of motor racing held on paved, purpose-built race tracks , as opposed to oval tracks and off-road racing...
series. Carr left the dirt tracks to go road racing for two years (1996 and 1997).

Carr was in contention for the 2006 Grand National Championship at the final race at Scioto Downs
Scioto Downs
Scioto Downs is a horse racing track located in Hamilton Township, a rural portion of Franklin County, Ohio, United States, south of Columbus owned by MTR Gaming Group...
in Columbus, Ohio
Columbus, Ohio
Columbus is the capital of and the largest city in the U.S. state of Ohio. The broader metropolitan area encompasses several counties and is the third largest in Ohio behind those of Cleveland and Cincinnati. Columbus is the third largest city in the American Midwest, and the fifteenth largest city...
before dropping out with mechanical problems. He ended the season tied for fourth in points behind chief rival Kenny Coolbeth
Kenny Coolbeth
Kenny Coolbeth is a flat track motorcycle racer from New Milford, Connecticut, United States. He won the 2006 A.M.A. Grand National Championship. He races in the #2 bike on the Harley-Davidson factory team. He attended Wamogo Regional High School...
. 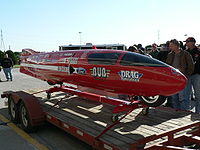