Encyclopedia
Cholula was an important city of pre-Columbian
Pre-Columbian
The pre-Columbian era incorporates all period subdivisions in the history and prehistory of the Americas before the appearance of significant European influences on the American continents, spanning the time of the original settlement in the Upper Paleolithic period to European colonization during...
Mesoamerica
Mesoamerica
Mesoamerica is a region and culture area in the Americas, extending approximately from central Mexico to Belize, Guatemala, El Salvador, Honduras, Nicaragua, and Costa Rica, within which a number of pre-Columbian societies flourished before the Spanish colonization of the Americas in the 15th and...
, dating back to at least the 2nd century BCE, with settlement as a village going back at least some thousand years earlier. The great site of Cholula stands just west of the modern city of Puebla. Its immense pyramid exceeds the Pyramid of the Sun at Teotihuacan in volume. It is the largest pyramid structure in the Americas.

Cholula grew from a small village to a regional center between 600 and 700 CE. During this period, Cholula was a major center contemporaneous with Teotihuacan
Teotihuacan
Teotihuacan – also written Teotihuacán, with a Spanish orthographic accent on the last syllable – is an enormous archaeological site in the Basin of Mexico, just 30 miles northeast of Mexico City, containing some of the largest pyramidal structures built in the pre-Columbian Americas...
and seems to have avoided, at least partially, that city's fate of violent destruction at the end of the Mesoamerican Classic
Mesoamerican chronology
Mesoamerican chronology divides the history of pre-Columbian Mesoamerica into several periods: the Paleo-Indian , the Archaic , the Preclassic , the Classic , and the Postclassic...
period.

Between 700 and 750 CE, Cholula was taken over by the Olmeca-Xicalanca, and the town grew rapidly, although overshadowed by Cacaxtla
Cacaxtla
Cacaxtla is an archaeological site located near the southern border of the Mexican state of Tlaxcala. It was a sprawling palace containing vibrantly colored murals painted in unmistakable Maya style. The nearby site of Xochitecatl was a more public ceremonial complex associated with Cacaxtla...
. The Olmeca-Xicalanca were in 1292 in turn displaced by the Tolteca-Chichimeca. In 1359, the nearby kingdom of Huexotzingo annexed Cholula.

During this entire period, Cholula remained a regional center of importance, enough so that, at the time of the fall of the Aztec
Aztec
The Aztec people were certain ethnic groups of central Mexico, particularly those groups who spoke the Nahuatl language and who dominated large parts of Mesoamerica in the 14th, 15th and 16th centuries, a period referred to as the late post-classic period in Mesoamerican chronology.Aztec is the...
empire, Aztec princes were still formally anointed by a Cholulan priest.

At the time of the arrival of Hernán Cortés
Hernán Cortés
Hernán Cortés de Monroy y Pizarro, 1st Marquis of the Valley of Oaxaca was a Spanish Conquistador who led an expedition that caused the fall of the Aztec Empire and brought large portions of mainland Mexico under the rule of the King of Castile in the early 16th century...
Cholula was second only to the Aztec capital Tenochtitlan (modern Mexico City
Mexico City
Mexico City is the Federal District , capital of Mexico and seat of the federal powers of the Mexican Union. It is a federal entity within Mexico which is not part of any one of the 31 Mexican states but belongs to the federation as a whole...
) as the largest city in central Mexico, possibly with a population of up to 100,000 people. In addition to the great temple of Quetzalcoatl and various palaces, the city had 365 temples.

In 1519 Cortés, either in a pre-meditated effort to instil fear upon the Aztecs waiting for him at Tenochtitlan or, as he later claimed when under investigation, wished to make an example of the natives who had planned to massacre him and his soldiers when they left the city. The native treachery was exposed by two priests who under questioning revealed the plot. When the warriors and nobles gathered, Cortez had them massacred at the central plaza and partially burned down the city.

A few years later Cortés vowed that the city would be rebuilt with a Christian
Christianity
Christianity is a monotheistic religion based on the life and teachings of Jesus as presented in canonical gospels and other New Testament writings...
church to replace each of the old pagan temples; less than 50 new churches were actually built, but the Spanish colonial churches are unusually numerous for a city of its size. There is a common saying in Cholula that there is a church for every day of the year.

During the Spanish Colonial period Cholula was overtaken in importance by the nearby city of Puebla
Puebla, Puebla
The city and municipality of Puebla is the capital of the state of Puebla, and one of the five most important colonial cities in Mexico. Being a planned city, it is located to the east of Mexico City and west of Mexico's main port, Veracruz, on the main route between the two.The city was founded...
. 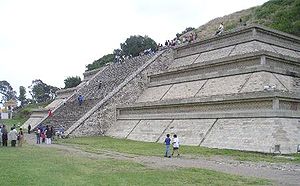