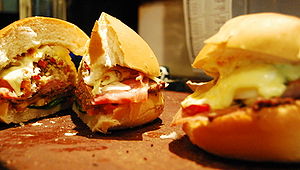 Chivito is the name of a sandwich-style national dish in Uruguay
Uruguay
Uruguay ,officially the Oriental Republic of Uruguay,sometimes the Eastern Republic of Uruguay; ) is a country in the southeastern part of South America. It is home to some 3.5 million people, of whom 1.8 million live in the capital Montevideo and its metropolitan area...
, and consists primarily of a thin slice of filet mignon (churrasco
Churrasco
Churrasco is a Portuguese and Spanish term referring to beef or grilled meat more generally, differing across Latin America and Europe, but a prominent feature in the cuisines of Argentina, Brazil, Chile, Nicaragua, Uruguay, and other Latin American countries...
beef), with mayonnaise, black or green olives, mozzarella, tomatoes and commonly also bacon, fried or hardboiled eggs and ham. It is served in a bun, often with a side of French fries. Other ingredients might be added into the sandwich such as red beets, peas, grilled or pan-fried red peppers and slices of cucumber.

The word Chivito literally means "little goat" or "baby goat". It is claimed the name arose at a restaurant in Uruguay, when a patron who was from the northern part of Argentina (Cordoba) ordered baby goat meat ("chivito
Chivito
Chivito is the grilled meat of a young goat eaten in Argentina, sometimes as part of an asado. "Chivito" differs from "cabrito" in that chivito is a slightly older animal with less tender meat...
") like one that she had ordered in Argentina. She was looking for a special taste, something similar to what she had experienced in her region. But since the restaurant owner Mr. Cabrera did not have this specialty, he served his toasted bread with ham, sliced filet mignon and seasoned it with different ingredients.
This happened in Punta del Este (Uruguay-South America) in a famous 1960s local restaurant named "El Mejillon" owned by Mr Carbonaro. This restaurant does not exist anymore in Punta del Este, but anyone who wants to know the real story should contact Graciela Carbonaro, Mr Carbonaro's daughter who still lives in Punta del Este.
The biggest ever "chivito" party was organized in Colonia del Sacramento (Uruguay).

The Canadian Chivito (in Spanish
Spanish language
Spanish , also known as Castilian , is a Romance language in the Ibero-Romance group that evolved from several languages and dialects in central-northern Iberia around the 9th century and gradually spread with the expansion of the Kingdom of Castile into central and southern Iberia during the...
Chivito Canadiense) is a variation of the sandwich, with the addition of Canadian bacon
Back bacon
Back bacon is bacon prepared from centre-cut boneless pork loin. The name refers to the cut of meat, which is from the back, and distinguishes it from other bacon made from pork belly or other cuts. Unlike other bacon, back bacon is not brined, cured, boiled, or smoked...
.

Although generally served as a sandwich, the chivito can also be served as a chivito platter (in Spanish Chivito al Plato). The dish would be prepared as an open sandwich
Open sandwich
An open sandwich, also known as an open face/faced sandwich, Ulrich Sandwich, bread baser, or tartine, consists of a single slice of bread with one or more food items on top.- In various countries :...
, without the bread. The dish is generally served with Russian salad
Russian salad
Salade Olivier is a salad composed of diced potatoes, vegetables and meats bound in mayonnaise. The salad is usually called Russian salad in Western European and Latin American countries, and Salad Olivieh in Iranian cooking.-History:...
and/or French fries
French fries
French fries , chips, fries, or French-fried potatoes are strips of deep-fried potato. North Americans tend to refer to any pieces of deep-fried potatoes as fries or French fries, while in the United Kingdom, Australia, Ireland and New Zealand, long, thinly cut slices of deep-fried potatoes are...
. In Argentina it is called lomito.
The source of this article is wikipedia, the free encyclopedia.  The text of this article is licensed under the GFDL.