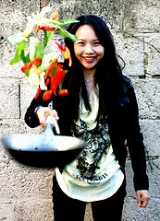 Encyclopedia
Ching-He Huang (born 28 November 1978) is a Taiwanese-born British food writer, food entrepreneur and TV chef who has appeared in a variety of television cooking shows. Ching has starred in three popular TV series and is the author of five best-selling cookbooks. She has developed a range of Ching-branded Woks, tableware, Chinese cooking and preparation utensils marketed by Typhoon Housewares, as well as branded exotic mushrooms grown in the UK and available through Tesco
Tesco
Tesco plc is a global grocery and general merchandise retailer headquartered in Cheshunt, United Kingdom. It is the third-largest retailer in the world measured by revenues and the second-largest measured by profits...
.

Born in Taipei, Taiwan, Huang spent most of her early childhood in South Africa
South Africa
The Republic of South Africa is a country in southern Africa. Located at the southern tip of Africa, it is divided into nine provinces, with of coastline on the Atlantic and Indian oceans...
before her parents moved to London
London
London is the capital city of :England and the :United Kingdom, the largest metropolitan area in the United Kingdom, and the largest urban zone in the European Union by most measures. Located on the River Thames, London has been a major settlement for two millennia, its history going back to its...
, England when she was 11 years old. Educated at Queen Mary and Westfield College
Queen Mary, University of London
Queen Mary, University of London is a public research university located in London, United Kingdom and a constituent college of the federal University of London...
, University of London
University of London
-20th century:Shortly after 6 Burlington Gardens was vacated, the University went through a period of rapid expansion. Bedford College, Royal Holloway and the London School of Economics all joined in 1900, Regent's Park College, which had affiliated in 1841 became an official divinity school of the...
and Bocconi Business School in Milan
Milan
Milan is the second-largest city in Italy and the capital city of the region of Lombardy and of the province of Milan. The city proper has a population of about 1.3 million, while its urban area, roughly coinciding with its administrative province and the bordering Province of Monza and Brianza ,...
, Huang graduated with a first class economics
Economics
Economics is the social science that analyzes the production, distribution, and consumption of goods and services. The term economics comes from the Ancient Greek from + , hence "rules of the house"...
degree and set up her own food businesses, Fuge Ltd and TZU.

Ching often reinvents favourite Chinese dishes, and cooks them in a style often different from most conventional Chinese restaurants in the UK, aiming to go for fresh and simple ingredients free of artificial colourings and additives.

Ching is also known for her cookery programmes, her first being Ching's Kitchen, which was first shown on UKTV Food
UKTV Food
Good Food is a lifestyle channel broadcasting in the United Kingdom as part of the UKTV network of channels. The channel originally launched on 5 November 2001 and relaunched in its current format on 22 June 2009. Good Food is available on satellite through Sky and on cable services, primarily...
in 2005. Other television appearances followed including Daily Cooks, Saturday Cooks and Great Food Live
Great Food Live
Great Food Live, formerly Good Food Live, was a British magazine programme hosted by Jeni Barnett and broadcast on UKTVFood part of the UKTV Network between 2001 and 2007. Jeni Barnett was joined every day by a chef co-host...
. Huang has also appeared on BBC Saturday Kitchen
Saturday Kitchen
Saturday Kitchen Live is a 90 minute cookery programme, which is broadcast live on BBC One on Saturday mornings. It is currently presented by James Martin; previous presenters have included Antony Worrall Thompson and Gregg Wallace. The programme is currently produced by Cactus TV...
with James Martin
James Martin (chef)
James Martin , is an English cook who first appeared on television in 1996.-Television career:...
, UK Food Market Kitchen
Market Kitchen
Market Kitchen is a cookery programme, made by Optomen, that premiered on Good Food in 2007. Presented by Rachel Allen, Amanda Lamb, Matt Tebbutt, Tom Parker Bowles and Matthew Fort, the programme concentrates on seasonal cooking and features visits to a local market to obtain seasonal produce...
as well as guest appearances on Ready Steady Cook
Ready Steady Cook
Ready Steady Cook was a BBC daytime TV cooking programme it first debuted on 24 October 1994 and the last edition was broadcast on the 2 February 2010. The programme was hosted by Fern Britton from 1994 until 2000 when celebrity chef Ainsley Harriott became the new host...
, Cooking the Books and cooked live for Melanie Sykes
Melanie Sykes
Melanie Ann Sykes is an English television presenter and model.-Career:Melanie Sykes was born to an English father, and an Anglo-Indian mother. She first came to public attention as the bikini-clad girl in the Boddingtons beer advertisements with the broad "Northern" accent in the mid-1990s...
on Grand Designs Live. She also appears as a regular guest on Sky Television
Sky Digital (UK & Ireland)
Sky is the brand name for British Sky Broadcasting's digital satellite television and radio service, transmitted from SES Astra satellites located at 28.2° east and Eutelsat's Eurobird 1 satellite at 28.5°E. The service was originally launched as Sky Digital, distinguishing it from the original...
food show Taste, hosted by Beverly Turner.

In 2006 she published her first recipe book, China Modern, which contained a variety of Chinese
Chinese cuisine
Chinese cuisine is any of several styles originating in the regions of China, some of which have become highly popular in other parts of the world – from Asia to the Americas, Australia, Western Europe and Southern Africa...
influenced recipes.

In 2008, she published a second recipe book to accompany a 6-part peak time television series Chinese Food Made Easy
Chinese Food Made Easy
Chinese Food Made Easy by Ching He Huang is a 6-part cooking television series commissioned and shown by BBC Two and BBC HD.-Overview:The series contains Ching's own versions of easy to make Chinese Food, spicy Szechuan food, Noodles, Dim sum, Sea Food, Fast Food, Desserts and Celebratory Food,...
, commissioned and shown by BBC Two
BBC Two
BBC Two is the second television channel operated by the British Broadcasting Corporation in the United Kingdom. It covers a wide range of subject matter, but tending towards more 'highbrow' programmes than the more mainstream and popular BBC One. Like the BBC's other domestic TV and radio...
and BBC HD
BBC HD
BBC HD is a high-definition television network provided by the BBC. The service was initially run as a trial from 15 May 2006 until becoming a full service on 1 December 2007...
. Chinese Food Made Easy aired in June 2008 and was an instant success, attracting millions of viewers. Her book, also called Chinese Food Made Easy, was published alongside the series and was a number 1 bestseller for six weeks.

Huang's three books published by Harper Collins, including her most recent work, have sold 250,000 copies in the U.K. and are now available in 20 to 25 countries around the world.

Huang has also written for several food magazines such as Olive
Olive (magazine)
olive is a modern food magazine published by Immediate Media Co. It was launched in 2003 and is an upmarket, monthly magazine in the stable that also includes BBC Good Food, bbcgoodfood.com, Easy Cook and Vegetarian Good Food.-Content:...
, BBC Good Food and Delicious.

Chinese Food Made Easy won the award for Second Best Chinese cuisine book in the world at the Gourmand World Cookbook Awards 2009.

Chinese Food in Minutes won the award for 3rd Best Chinese cuisine book in the world at the Gourmand World Cookbook Awards 2010.

In 2009 Ching He Huang has teamed up with China's number one selling beer, Tsingtao, to find the best Chinese dining experience in the UK. Members of the public were invited to nominate their favourite Chinese restaurant and there have been over 500 nominations.Ching leads a panel of experts to judge which restaurant will be crowned.The Chinese restaurant that wins the Legacy of Taste title will be awarded a prestigious trophy and framed certificate for display in their restaurant. The award will be presented by Ching He Huang at an exclusive awards dinner event.