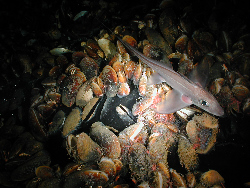 The Chimaeridae, or shortnose chimaeras are a family
Family (biology)
In biological classification, family is* a taxonomic rank. Other well-known ranks are life, domain, kingdom, phylum, class, order, genus, and species, with family fitting between order and genus. As for the other well-known ranks, there is the option of an immediately lower rank, indicated by the...
of cartilaginous fish.

They resemble other chimaeras in general form and habits, but have a short, rounded, snout, without the modifications found in related families. Many species have a long tapering tail, given them an alternative name of ratfish. Shortnose chimaeras have a venomous spine on their backs, which is sufficiently dangerous to injure humans.

They are found in temperate and tropical marine waters worldwide. Most species are restricted to depths below 200 metres (656.2 ft), but a few, notably the spotted ratfish
Spotted ratfish
The spotted ratfish, Hydrolagus colliei, is a chimaera found in the north-eastern Pacific Ocean. Often seen by divers at night in the Pacific Northwest, this harmless shark relative gets its characteristic name from a pointed rat-like tail. The ratfish lays leathery egg cases on the bottom of muddy...
, can locally be found at relatively shallow depths. They range from 38 centimetres (15 in) to 150 centimetres (4.9 ft) in maximum total length, depending on species.

There are 36 species, grouped into two genera: