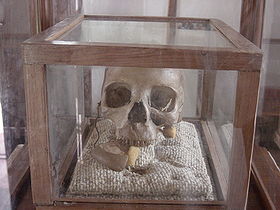 Paramount
Paramount leader
Paramount leader literally "the highest leader of the party and the state ", in modern Chinese political science, unofficially refers to the political leader of the People's Republic of China....
Chief Mkwavinyika Munyigumba Mwamuyinga (1855–19 July 18981), more commonly known as Chief Mkwawa, was a Hehe
Hehe
The Hehe are an ethnic and linguistic group based in Iringa Region in south-central Tanzania, speaking the Bantu Hehe language. In 1994, the Hehe population was estimated to number 750,000.-History:...
tribal
Tribe
A tribe, viewed historically or developmentally, consists of a social group existing before the development of, or outside of, states.Many anthropologists use the term tribal society to refer to societies organized largely on the basis of kinship, especially corporate descent groups .Some theorists...
leader in German East Africa
German East Africa
German East Africa was a German colony in East Africa, which included what are now :Burundi, :Rwanda and Tanganyika . Its area was , nearly three times the size of Germany today....
(now mostly the mainland part of Tanzania
Tanzania
The United Republic of Tanzania is a country in East Africa bordered by Kenya and Uganda to the north, Rwanda, Burundi, and the Democratic Republic of the Congo to the west, and Zambia, Malawi, and Mozambique to the south. The country's eastern borders lie on the Indian Ocean.Tanzania is a state...
) who opposed the German colonisation
Colonisation
Colonization occurs whenever any one or more species populate an area. The term, which is derived from the Latin colere, "to inhabit, cultivate, frequent, practice, tend, guard, respect", originally related to humans. However, 19th century biogeographers dominated the term to describe the...
. The name "Mkwawa" is derived from Mukwava, itself a shortened form of Mukwavinyika, meaning "conqueror of many lands". Mkwawa was born in Luhota and was the son of Chief Munyigumba, who died in 1879.

In July 1891, the German commissioner, Emil von Zelewski, led a battalion of soldiers (320 askari
Askari
Askari is an Arabic, Bosnian, Urdu, Turkish, Somali, Persian, Amharic and Swahili word meaning "soldier" . It was normally used to describe local troops in East Africa, Northeast Africa, and Central Africa serving in the armies of European colonial powers...
s with officers and porters) to suppress the Hehe. On 17 August, they were attacked by Mkwawa's 3,000-strong army at Lugalo
Lugalo
Lugalo is a village in Tanzania near Iringa which in 1891 was the site of a battle between a German colonial military force and the Hehe army of Chief Mkwawa. This was the first major defeat for the German Schutztruppe and the beginning of the Hehe wars....
, who, despite only being equipped with spear
Spear
A spear is a pole weapon consisting of a shaft, usually of wood, with a pointed head.The head may be simply the sharpened end of the shaft itself, as is the case with bamboo spears, or it may be made of a more durable material fastened to the shaft, such as flint, obsidian, iron, steel or...
s and a few guns, quickly overpowered the German force and killed Zelewski.

On 28 October 1894, the Germans, under the new commissioner Colonel Freiherr Friedrich von Schele, attacked Mkwawa's fortress at Kalenga
Kalenga
Kalenga is an administrative ward in the Iringa Rural district of the Iringa Region of Tanzania. According to the 2002 census, the ward has a total population of 8,172.-References:...
. Although they took the fort, Mkwawa managed to escape. Subsequently, Mkwawa conducted a campaign of guerrilla warfare
Guerrilla warfare
Guerrilla warfare is a form of irregular warfare and refers to conflicts in which a small group of combatants including, but not limited to, armed civilians use military tactics, such as ambushes, sabotage, raids, the element of surprise, and extraordinary mobility to harass a larger and...
, harassing the Germans until 1898 when, on 19 July, he was surrounded and shot himself rather than be captured.

After his death, German soldiers removed Mkwawa's head. The skull was sent to Berlin and probably ended up in the Übersee-Museum Bremen. In 1918 the then British Administrator of German East Africa H.A. Byatt proposed to his government that it should demand a return of the skull to Tanganyika in order to reward the Wahehe for their cooperation with the British during the war and in order to have a symbol assuring the locals of the definitive end of German power. The skull's return was stipulated in the 1919 Treaty of Versailles
Treaty of Versailles
The Treaty of Versailles was one of the peace treaties at the end of World War I. It ended the state of war between Germany and the Allied Powers. It was signed on 28 June 1919, exactly five years after the assassination of Archduke Franz Ferdinand. The other Central Powers on the German side of...
:

"ARTICLE 246. Within six months from the coming into force of the present Treaty, ... Germany will hand over to His Britannic Majesty's Government the skull of the Sultan Mkwawa which was removed from the Protectorate of German East Africa and taken to Germany."

The Germans disputed the removal of the said skull from East Africa and the British government took the position that the whereabouts could not be traced.

However, after World War II the Governor of Tanganyika, Sir Edward Twining, took up the issue again. After enquiries he was directed to the Bremen Museum which he visited himself in 1953. The Museum had a collection of 2000 skulls, 84 of which originated from the former German East Africa. He short-listed the ones which showed measurements similar to surviving relatives of Chief Mkwawa; from this selection he picked the only skull with a bullet-hole as the skull of chief Mkwawa.

The skull was finally returned on 9 July 1954, and now resides at the Mkwawa Memorial Museum in Kalenga, near the town of Iringa
Iringa
Iringa is a city in Tanzania with a population of 112,900 . It is situated at a latitude of 7.77°S and longitude of 35.69°E. The name is derived from the Hehe word lilinga, meaning fort....
.