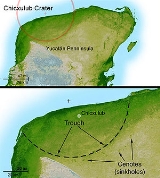 Overview
The Chicxulub crater is an ancient impact crater
Impact crater
In the broadest sense, the term impact crater can be applied to any depression, natural or manmade, resulting from the high velocity impact of a projectile with a larger body...
buried underneath the Yucatán Peninsula
Yucatán Peninsula
The Yucatán Peninsula, in southeastern Mexico, separates the Caribbean Sea from the Gulf of Mexico, with the northern coastline on the Yucatán Channel...
in Mexico
Mexico
The United Mexican States , commonly known as Mexico , is a federal constitutional republic in North America. It is bordered on the north by the United States; on the south and west by the Pacific Ocean; on the southeast by Guatemala, Belize, and the Caribbean Sea; and on the east by the Gulf of...
. Its center is located near the town of Chicxulub
Chicxulub, Yucatán
Chicxulub is a town, and surrounding municipality of the same name, in the Mexican state of Yucatán.At the census of 2005, the town had a population of 5,052 people....
, after which the crater is named. The crater is more than 180 km (110 mi) in diameter, making the feature one of the largest confirmed impact structures on Earth; the impacting bolide that formed the crater was at least 10 km (6 mi) in diameter.

The crater was discovered by Glen Penfield, a geophysicist
Geophysics
Geophysics is the physics of the Earth and its environment in space; also the study of the Earth using quantitative physical methods. The term geophysics sometimes refers only to the geological applications: Earth's shape; its gravitational and magnetic fields; its internal structure and...
who had been working in the Yucatán while looking for oil
Petroleum
Petroleum or crude oil is a naturally occurring, flammable liquid consisting of a complex mixture of hydrocarbons of various molecular weights and other liquid organic compounds, that are found in geologic formations beneath the Earth's surface. Petroleum is recovered mostly through oil drilling...
during the late 1970s.