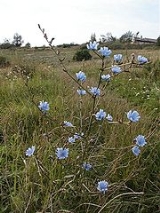 Overview
Common chicory, Cichorium intybus, is a somewhat woody, perennial
Perennial plant
A perennial plant or simply perennial is a plant that lives for more than two years. The term is often used to differentiate a plant from shorter lived annuals and biennials. The term is sometimes misused by commercial gardeners or horticulturalists to describe only herbaceous perennials...
herbaceous plant
Herbaceous plant
A herbaceous plant is a plant that has leaves and stems that die down at the end of the growing season to the soil level. They have no persistent woody stem above ground...
usually with bright blue flower
Flower
A flower, sometimes known as a bloom or blossom, is the reproductive structure found in flowering plants . The biological function of a flower is to effect reproduction, usually by providing a mechanism for the union of sperm with eggs...
s, rarely white or pink. Various varieties are cultivated for salad leaves, chicons (blanched buds), or for roots (var. sativum), which are baked, ground, and used as a coffee substitute
Coffee substitute
Coffee substitutes are non-coffee products, usually without caffeine, that are used to imitate coffee. Coffee substitutes can be used for medical, economic and religious reasons, or simply because coffee is not readily available. Roasted grain beverages are common substitutes for coffee.In World...
and additive. It is also grown as a forage
Forage
Forage is plant material eaten by grazing livestock.Historically the term forage has meant only plants eaten by the animals directly as pasture, crop residue, or immature cereal crops, but it is also used more loosely to include similar plants cut for fodder and carried to the animals, especially...
crop for livestock
Livestock
Livestock refers to one or more domesticated animals raised in an agricultural setting to produce commodities such as food, fiber and labor. The term "livestock" as used in this article does not include poultry or farmed fish; however the inclusion of these, especially poultry, within the meaning...
. It lives as a wild plant on roadsides in its native Europe, and in North America and Australia, where it has become naturalized
Naturalisation (biology)
In biology, naturalisation is any process by which a non-native organism spreads into the wild and its reproduction is sufficient to maintain its population. Such populations are said to be naturalised....
.

"Chicory" is also the common name in the United States for curly endive
Endive
Endive , Cichorium endivia, is a leaf vegetable belonging to the daisy family. Endive can be cooked or used raw in salads.-Background:Endive is also a common name for some types of chicory...
(Cichorium endivia); these two closely related species are often confused.
Common chicory is also known as blue sailors, succory, and coffeeweed.

If I drink coffee made from chicory root will I still receive the prebiotic fiber that promotes well-being? (I know that the root is either baked or r...
More
x