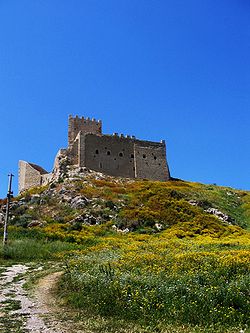 The Chiaramonte are a noble family of Sicily
Sicilian nobility
The Sicilian nobility was a privileged hereditary class in the Kingdom of Sicily, the Kingdom of the Two Sicilies and the Kingdom of Italy, whose origins may be traced to the 11th century CE.-History:...
, claiming descent from Charlemagne
Charlemagne
Charlemagne was King of the Franks from 768 and Emperor of the Romans from 800 to his death in 814. He expanded the Frankish kingdom into an empire that incorporated much of Western and Central Europe. During his reign, he conquered Italy and was crowned by Pope Leo III on 25 December 800...
. They became the most powerful and wealthy family in Sicily. In the 13th century the marriage of Manfredi Chiaramonte
Manfredi Chiaramonte
Manfredi III Chiaramonte was a Sicilian nobleman.Of French origins, he was given the County of Modica, then one of the most powerful fiefs in the Kingdom of Sicily, in 1377. He was also made lord of Trapani, Agrigento, Bivona, Licata, Castronovo, Lentini, Palma di Montechiaro and Mussomeli, where...
to Isabella Mosca, united the two Sicilian counties of Modica
County of Modica
The County of Modica was a semi-independent feudal territory within the Kingdom of Sicily from 1296 to 1812. Its capital was Modica, on the southern tip of the island, although the cities of Ragusa and Scicli housed some government offices for a period...
and Ragusa
Ragusa, Italy
Ragusa is a city and comune in southern Italy. It is the capital of the province of Ragusa, on the island of Sicily, with around 75,000 inhabitants. It is built on a wide limestone hill between two deep valleys, Cava San Leonardo and Cava Santa Domenica...
. Around 1307-1320, the couple built the family seat, the Palazzo Chiaramonte
Palazzo Chiaramonte
thumb|250px|Palazzo Chiaramonte-Steri.Palazzo Chiaramonte-Steri is a historical palace in Palermo, Sicily, southern Italy.The building was begun in the early 14th century, and was the residence of the powerful Sicilian lord Manfredi III Chiaramonte...
, in Palermo. 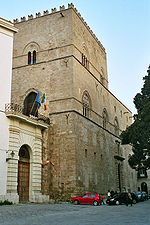 The families great power in Sicily lasted until 1392 with the execution of Andrea Chiaramonte, 8th Count of Modica, last defender of Palermo for King Frederick IV of Sicily
Frederick III the Simple
Frederick III , called the Simple, was King of Sicily from 1355 to 1377. He was the second son of Peter II of Sicily and Elisabeth of Carinthia. He succeeded his brother Louis...
by the illegitimate pretender Martin I of Aragon
Martin I of Aragon
Martin of Aragon , called the Elder, the Humane, the Ecclesiastic, was the King of Aragon, Valencia, Sardinia, and Corsica and Count of Barcelona from 1396 and King of Sicily from 1409...
. It was outside of the Palazzo Chiaramonte that Andrea Chiatamonte was executed on 1 June 1392 Following the fall of the House of Chiaramonte, their palace became known as the Palazzo Steri. The palazzi subsequently became the residence of Martin I of Aragon and of Blanche de Navarre, then the Spanish viceroys, and then a prison of the Inquisition
Inquisition
The Inquisition, Inquisitio Haereticae Pravitatis , was the "fight against heretics" by several institutions within the justice-system of the Roman Catholic Church. It started in the 12th century, with the introduction of torture in the persecution of heresy...
. Today, the palace's much copied and distinctive form of Norman Gothic architecture is known, in Sicily, as the Chiaramontan style.

Traditionally, direct male descendants of Manfredi are called Pietro, Ugo or Flavio - Pietro the foundation stone, Ugo the king of Sicily and Flavio because of Sicily's bright yellow sun. At present, the family uses the Cardone surname.