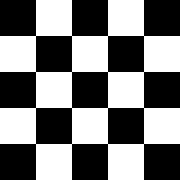 The term checkerboard is also used to denote any rectangular square-tiled board. In this sense it refers not to a physical board as such but to the mathematical
Mathematics
Mathematics is the study of quantity, space, structure, and change. Mathematicians seek out patterns and formulate new conjectures. Mathematicians resolve the truth or falsity of conjectures by mathematical proofs, which are arguments sufficient to convince other mathematicians of their validity...
abstraction
Abstraction
Abstraction is a process by which higher concepts are derived from the usage and classification of literal concepts, first principles, or other methods....
of such a board. The adjective chequered refers to the pattern shown in many locations, such as the checkered flag
Racing flags
Racing flags are traditionally used in auto racing and similar motorsports to indicate track condition and to communicate important messages to drivers. Typically, the starter, sometimes the grand marshal of a race, waves the flags atop a flag stand near the start/finish line...
used to signify the end of a vehicle race, the Purina
Nestlé Purina PetCare
Nestlé Purina PetCare Company is the pet food division of Swiss-based Nestlé S.A., following its acquisition of the American Ralston Purina Company on December 12, 2001 and subsequent merger with Nestlé's Friskies PetCare Company. As a wholly owned subsidiary, it is headquartered at the General...
logo, or the livery on some emergency service vehicles. However when this pattern is used on such vehicles, in certain countries, it is called a Sillitoe Tartan
Sillitoe Tartan
The Sillitoe Tartan is the name given to the distinctive black and white chequered pattern which was originally associated with the police in Scotland, but which later spread to Australia, New Zealand, and the rest of the United Kingdom, as well as to some other places such as Chicago...
. The checkerboard is also closely associated with national symbols of the nation of Croatia
Croatia
Croatia , officially the Republic of Croatia , is a unitary democratic parliamentary republic in Europe at the crossroads of the Mitteleuropa, the Balkans, and the Mediterranean. Its capital and largest city is Zagreb. The country is divided into 20 counties and the city of Zagreb. Croatia covers ...
.

The checkerboard pattern is often associated with the Ska
Ska
Ska |Jamaican]] ) is a music genre that originated in Jamaica in the late 1950s, and was the precursor to rocksteady and reggae. Ska combined elements of Caribbean mento and calypso with American jazz and rhythm and blues...
music genre, for breaking the racial barrier between black and whites at the time. A checkerboard marking painted on a hilltop was used as visual guidance on Hongkong's old Kai Tak Airport
Kai Tak Airport
Kai Tak Airport was the international airport of Hong Kong from 1925 until 1998. It was officially known as the Hong Kong International Airport from 1954 to 6 July 1998, when it was closed and replaced by the new Hong Kong International Airport at Chek Lap Kok, 30 km to the west...
. Many taxicab
Taxicab
A taxicab, also taxi or cab, is a type of vehicle for hire with a driver, used by a single passenger or small group of passengers, often for a non-shared ride. A taxicab conveys passengers between locations of their choice...
s also use a checkerboard pattern.

A square checkerboard is with an alternating pattern is used for include:

The following games require an 8×8 board and are sometimes played be played on a chessboard
Chessboard
A chessboard is the type of checkerboard used in the board game chess, and consists of 64 squares arranged in two alternating colors...
.