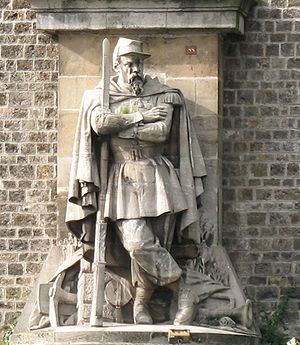 Chasseur [sha-sur; Fr. sha-sœr] (a French
French language
French is a Romance language spoken as a first language in France, the Romandy region in Switzerland, Wallonia and Brussels in Belgium, Monaco, the regions of Quebec and Acadia in Canada, and by various communities elsewhere. Second-language speakers of French are distributed throughout many parts...
term for "hunter") is the designation given to certain regiments of French
France
The French Republic , The French Republic , The French Republic , (commonly known as France , is a unitary semi-presidential republic in Western Europe with several overseas territories and islands located on other continents and in the Indian, Pacific, and Atlantic oceans. Metropolitan France...
light infantry
Light infantry
Traditionally light infantry were soldiers whose job was to provide a skirmishing screen ahead of the main body of infantry, harassing and delaying the enemy advance. Light infantry was distinct from medium, heavy or line infantry. Heavy infantry were dedicated primarily to fighting in tight...
(Chasseurs à pied) or light cavalry
Light cavalry
Light cavalry refers to lightly armed and lightly armored troops mounted on horses, as opposed to heavy cavalry, where the riders are heavily armored...
(Chasseurs à cheval) troops, trained for rapid action.

This branch of the French Army
French Army
The French Army, officially the Armée de Terre , is the land-based and largest component of the French Armed Forces.As of 2010, the army employs 123,100 regulars, 18,350 part-time reservists and 7,700 Legionnaires. All soldiers are professionals, following the suspension of conscription, voted in...
originated during the War of the Austrian Succession
War of the Austrian Succession
The War of the Austrian Succession  – including King George's War in North America, the Anglo-Spanish War of Jenkins' Ear, and two of the three Silesian wars – involved most of the powers of Europe over the question of Maria Theresa's succession to the realms of the House of Habsburg.The...
when, in 1743, Jean Chrétien Fischer
Jean Chrétien Fischer
Jean Chrétien Fischer was a German-born soldier in the French service.-Biography:...
was authorized by the Marshal de Belle-Isle to raise a company. It was called Fischer's chasseurs.

The Chasseurs à pied were the light infantrymen of the French line. They were armed the same as their counterparts in the regular line (Fusilier
Fusilier
Fusilier was originally the name of a soldier armed with a light flintlock musket called the fusil. The word was first used around 1680, and has later developed into a regimental designation.-History:...
) infantry battalions but were trained to excel in marksmanship and in executing manoeuvres at high speed. The other light infantry unit type, the voltigeurs
Voltigeurs
The Voltigeurs were French military skirmish units created in 1804 by Emperor Napoleon I.-Etymology:Voltigeurs hold their name from their originally conceived role of cavalry-transported skirmishers: the voltigeurs were intended to jump onto the croup of cavalry horses in order to advance more...
, specialised in skirmishing and advance screening of the main force. The chasseurs could also be called upon to form advance guards and scouting parties alongside the voltigeurs.

The Chasseurs à Cheval, a type of French light cavalry
Light cavalry
Light cavalry refers to lightly armed and lightly armored troops mounted on horses, as opposed to heavy cavalry, where the riders are heavily armored...
date from 1779. For much of their history these regiments were generally not held in as high esteem as their infantry counterparts, or the identically armed (but much more lavishly uniformed) hussars. They were frequently used as advance scouting units providing valuable information on enemy movements. Both Napoleon's Imperial Guard and the Royal Guard of the Restoration
Bourbon Restoration
The Bourbon Restoration is the name given to the period following the successive events of the French Revolution , the end of the First Republic , and then the forcible end of the First French Empire under Napoleon  – when a coalition of European powers restored by arms the monarchy to the...
each included a regiment of Chasseurs à Cheval.

All of these units have different traditions :

Although the traditions of these different branches of the French Army are very different, there is still a tendency to confuse one with the other. For example when World War I veteran Léon Weil
Léon Weil
Léon Roger Weil was one of the last two surviving veterans of the battle of Val-de-Marne in the First World War...
died, the AFP press agency stated that he was a member of the 5th "Regiment de Chasseurs Alpins". It was in fact the 5th Bataillon.