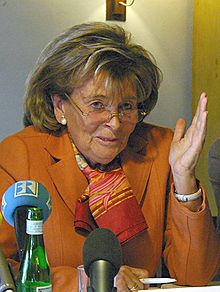 Knobloch was born into a well-to-do Jewish family of lawyers. She is the daughter of Munich lawyer and Bavarian senator Fritz Neuland
Fritz Neuland
Fritz Neuland was a Bavarian lawyer, Jewish leader and Senator.In the 1920s he had a law office in Munich together with the later Bavarian Prime Minister Wilhelm Hoegner....
. Her mother Margarethe was born a Christian, but converted to Judaism upon marrying Neuland. However, her parents divorced in 1936. She was subsequently raised by her grandmother Albertine Neuland. Upon the arrest of her father, Knobloch recalls being saved by the former housekeeper of the Neuland family, that woman took her in her hand and brought her to her Christian family in Franconia. From 1942 onward, she lived with Catholic farmers in Franconia
Franconia
Franconia is a region of Germany comprising the northern parts of the modern state of Bavaria, a small part of southern Thuringia, and a region in northeastern Baden-Württemberg called Tauberfranken...
, who pretended she was their own illegitimate daughter.

Charlotte Neuland married the late Samuel Knobloch in 1951, and has three children.