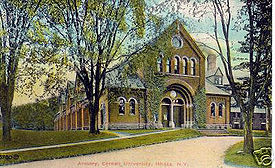 Charles Babcock was a United States
United States
The United States of America is a federal constitutional republic comprising fifty states and a federal district...
architect
Architect
An architect is a person trained in the planning, design and oversight of the construction of buildings. To practice architecture means to offer or render services in connection with the design and construction of a building, or group of buildings and the space within the site surrounding the...
, academic, Episcopal priest and founding member of the American Institute of Architects
American Institute of Architects
The American Institute of Architects is a professional organization for architects in the United States. Headquartered in Washington, D.C., the AIA offers education, government advocacy, community redevelopment, and public outreach to support the architecture profession and improve its public image...
.

He was born in Ballston Spa, New York
Ballston Spa, New York
Ballston Spa is a village in Saratoga County, New York, United States. The population was 5,556 at the 2000 census. It is the county seat of Saratoga County. The village is named after Rev. Eliphalet Ball, a Congregationalist clergyman and an early settler. The village lies on the border of two...
. After being educated at Union College
Union College
Union College is a private, non-denominational liberal arts college located in Schenectady, New York, United States. Founded in 1795, it was the first institution of higher learning chartered by the New York State Board of Regents. In the 19th century, it became the "Mother of Fraternities", as...
, he served as an apprentice of Richard Upjohn
Richard Upjohn
Richard Upjohn was an English-born architect who emigrated to the United States and became most famous for his Gothic Revival churches. He was partially responsible for launching the movement to such popularity in the United States. Upjohn also did extensive work in and helped to popularize the...
while he designed Trinity Church
Trinity Church, New York
Trinity Church at 79 Broadway, Lower Manhattan, is a historic, active parish church in the Episcopal Diocese of New York...
in Manhattan
Manhattan
Manhattan is the oldest and the most densely populated of the five boroughs of New York City. Located primarily on the island of Manhattan at the mouth of the Hudson River, the boundaries of the borough are identical to those of New York County, an original county of the state of New York...
. Remaining with the firm for five years, he became a partner and later married Upjohn's daughter. His interest in Gothic Revival architecture
Gothic Revival architecture
The Gothic Revival is an architectural movement that began in the 1740s in England...
led him to study for the ministry, and after his training he became the priest and rector of an Episcopal church in Arden, New York
Arden, New York
Arden, is a hamlet around the town line of Tuxedo and Monroe, New York, in the United States. It is roughly coterminous with the 10910 ZIP Code....
.

He was elected the first Professor of Architecture at Cornell University
Cornell University
Cornell University is an Ivy League university located in Ithaca, New York, United States. It is a private land-grant university, receiving annual funding from the State of New York for certain educational missions...
on September 18, 1871, essentially founding the College of Architecture, Art, and Planning
Cornell University College of Architecture, Art, and Planning
The College of Architecture, Art, and Planning at Cornell University was established in 1871 as the School of Architecture with the hiring of Charles Babcock as the first Professor creating the first four-year course of study in architecture in the United States...
. While at Cornell, he continued to serve as a minister, and authored two textbooks, Elementary Architecture (1876) and Vaults (1884), and designed several important campus buildings, including Sage Hall, Olive Tjaden Hall, and Sage Chapel
Sage Chapel
Sage Chapel is the non-denominational chapel on the campus of Cornell University in Ithaca, New York State and serves as the final resting place of the university's founders, Ezra Cornell and Andrew Dickson White, and their wives...
. He was a professor until 1897, when he became Professor Emeritus
Emeritus
Emeritus is a post-positive adjective that is used to designate a retired professor, bishop, or other professional or as a title. The female equivalent emerita is also sometimes used.-History:...
, and served in that position until his death.
The source of this article is wikipedia, the free encyclopedia.  The text of this article is licensed under the GFDL.