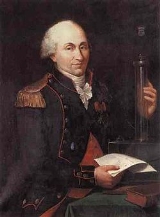 Encyclopedia
Charles-Augustin de Coulomb (14 June 1736 – 23 August 1806) was a French
France
The French Republic , The French Republic , The French Republic , (commonly known as France , is a unitary semi-presidential republic in Western Europe with several overseas territories and islands located on other continents and in the Indian, Pacific, and Atlantic oceans. Metropolitan France...
physicist
Physicist
A physicist is a scientist who studies or practices physics. Physicists study a wide range of physical phenomena in many branches of physics spanning all length scales: from sub-atomic particles of which all ordinary matter is made to the behavior of the material Universe as a whole...
. He is best known for developing Coulomb's law
Coulomb's law
Coulomb's law or Coulomb's inverse-square law, is a law of physics describing the electrostatic interaction between electrically charged particles. It was first published in 1785 by French physicist Charles Augustin de Coulomb and was essential to the development of the theory of electromagnetism...
, the definition of the electrostatic force of attraction and repulsion. The [SI unit] of charge, the coulomb, was named after him.

Coulomb was born in Angoulême
Angoulême
-Main sights:In place of its ancient fortifications, Angoulême is encircled by boulevards above the old city walls, known as the Remparts, from which fine views may be obtained in all directions. Within the town the streets are often narrow. Apart from the cathedral and the hôtel de ville, the...
, France
France
The French Republic , The French Republic , The French Republic , (commonly known as France , is a unitary semi-presidential republic in Western Europe with several overseas territories and islands located on other continents and in the Indian, Pacific, and Atlantic oceans. Metropolitan France...
, to an affluent family. His father, Henri Coulomb, was inspector of the Royal Fields in Montpellier
Montpellier
-Neighbourhoods:Since 2001, Montpellier has been divided into seven official neighbourhoods, themselves divided into sub-neighbourhoods. Each of them possesses a neighbourhood council....
. His mother, Catherine Bajet, came from a wealthy family in the wool trade. When Coulomb was a boy, the family moved to Paris
Paris
Paris is the capital and largest city in France, situated on the river Seine, in northern France, at the heart of the Île-de-France region...
and there Coulomb studied at the prestigious Collège des Quatre-Nations
Collège des Quatre-Nations
The Collège des Quatre-Nations , also known as the Collège Mazarin after its founder, was one of the colleges of the historic University of Paris. It was founded through a bequest by the Cardinal Mazarin...
. The courses he studied in mathematics there, under Pierre Charles Monnier, left him determined to pursue mathematics and similar subjects as a career. From 1757 to 1759 he joined his father's family in Montpellier and took part in the work of the academy of the city, directed by the mathematician Augustin Danyzy. With his father's approval, Coulomb returned to Paris in 1759 where he was successful in the entrance examination for the military school at Mézières
Charleville-Mézières
Charleville-Mézières is a commune in northern France, capital of the Ardennes department in the Champagne-Ardenne region. Charleville-Mézières is located on the banks of the Meuse River.-History:...
.

After he left the school in 1761, Coulomb initially took part in the survey for the British coastal charts and was then sent on a mission to Martinique
Martinique
Martinique is an island in the eastern Caribbean Sea, with a land area of . Like Guadeloupe, it is an overseas region of France, consisting of a single overseas department. To the northwest lies Dominica, to the south St Lucia, and to the southeast Barbados...
in 1764 to take part in the construction of the Fort Bourbon
Fort Bourbon
Fort Bourbon was one of the important northern forts that La Vérendrye had built during his long tenure as commandant of the western forts of New France. This was during the earliest exploration of the northwest of North America...
under the orders of the lieutenant-colonel of Rochemore, as the French colony was insulated in the middle of the English and Spanish possessions following the Seven Years' War
Seven Years' War
The Seven Years' War was a global military war between 1756 and 1763, involving most of the great powers of the time and affecting Europe, North America, Central America, the West African coast, India, and the Philippines...
. Coulomb spent eight years directing the work, contracting tropical fever
Tropical disease
Tropical diseases are diseases that are prevalent in or unique to tropical and subtropical regions. The diseases are less prevalent in temperate climates, due in part to the occurrence of a cold season, which controls the insect population by forcing hibernation. Insects such as mosquitoes and...
. He carried out several experiments on the resistance of masonries and the behaviour of the walls of escarpe (supportings), which were inspired by the ideas of Pieter van Musschenbroek
Pieter van Musschenbroek
Pieter van Musschenbroek was a Dutch scientist. He was a professor in Duisburg, Utrecht, and Leiden, where he held positions in mathematics, philosophy, medicine, and astrology. He is credited with the invention of the first capacitor in 1746: the Leyden jar. He performed pioneering work on the...
on friction
Friction
Friction is the force resisting the relative motion of solid surfaces, fluid layers, and/or material elements sliding against each other. There are several types of friction:...
.

Upon his return to France, with the rank of Captain, he was employed at La Rochelle
La Rochelle
La Rochelle is a city in western France and a seaport on the Bay of Biscay, a part of the Atlantic Ocean. It is the capital of the Charente-Maritime department.The city is connected to the Île de Ré by a bridge completed on 19 May 1988...
, the Isle of Aix and Cherbourg. He discovered an inverse relationship of the force between electric charge
Electric charge
Electric charge is a physical property of matter that causes it to experience a force when near other electrically charged matter. Electric charge comes in two types, called positive and negative. Two positively charged substances, or objects, experience a mutual repulsive force, as do two...
s and the square of its distance, later named after him as Coulomb's law
Coulomb's law
Coulomb's law or Coulomb's inverse-square law, is a law of physics describing the electrostatic interaction between electrically charged particles. It was first published in 1785 by French physicist Charles Augustin de Coulomb and was essential to the development of the theory of electromagnetism...
.

In 1781, he was stationed at Paris
Paris
Paris is the capital and largest city in France, situated on the river Seine, in northern France, at the heart of the Île-de-France region...
. On the outbreak of the Revolution
French Revolution
The French Revolution , sometimes distinguished as the 'Great French Revolution' , was a period of radical social and political upheaval in France and Europe. The absolute monarchy that had ruled France for centuries collapsed in three years...
in 1789, he resigned his appointment as intendant des eaux et fontaines and retired to a small estate which he possessed at Blois
Blois
Blois is the capital of Loir-et-Cher department in central France, situated on the banks of the lower river Loire between Orléans and Tours.-History:...
. He was recalled to Paris for a time in order to take part in the new determination of weights and measures, which had been decreed by the Revolutionary government. He became one of the first members of the French National Institute and was appointed inspector of public instruction in 1802. His health was already very feeble and four years later he died in Paris.

In 1784, his memoir Recherches théoriques et expérimentales sur la force de torsion et sur l'élasticité des fils de metal (Theoretical research and experimentation on torsion and the elasticity of metal wire) appeared. This memoir contained the results of Coulomb's experiments on the torsional force
Torsion (mechanics)
In solid mechanics, torsion is the twisting of an object due to an applied torque. In sections perpendicular to the torque axis, the resultant shear stress in this section is perpendicular to the radius....
for metal wires. His general result is,

"... the moment of the torque is, for wires of the same metal, proportional to the torsional angle, the fourth power of the diameter and the inverse of the length of the wire..."

It also contained a detailed description of different forms of his torsion balance. He used the instrument with great success for the experimental investigation of the distribution of charge
Electric charge
Electric charge is a physical property of matter that causes it to experience a force when near other electrically charged matter. Electric charge comes in two types, called positive and negative. Two positively charged substances, or objects, experience a mutual repulsive force, as do two...
on surfaces, of the laws of electrical and magnetic force and of the mathematical
Mathematical physics
Mathematical physics refers to development of mathematical methods for application to problems in physics. The Journal of Mathematical Physics defines this area as: "the application of mathematics to problems in physics and the development of mathematical methods suitable for such applications and...
theory of which he may also be regarded as the founder. 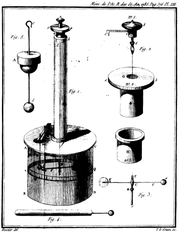 In 1785, Coulomb presented his three reports on Electricity and Magnetism:

- Premier Mémoire sur l’Électricité et le Magnétisme. In this publication, Coulomb describes "How to construct and use an electric balance (torsion balance) based on the property of the metal wires of having a reaction torsion force proportional to the torsion angle." Coulomb also experimentally determined the law that explains how "two bodies electrified of the same kind of Electricity exert on each other." On page 574 he states:

Translation: It follows therefore from these three tests, that the repulsive force that the two balls -- [which were] electrified with the same kind of electricity -- exert on each other, follows the inverse proportion of the square of the distance.

- Second Mémoire sur l’Électricité et le Magnétisme. In this publication, Coulomb carries out the "determination according to which laws both the Magnetic and the Electric fluids act, either by repulsion or by attraction." On page 579, he states that the attractive force between two oppositely charged spheres is proportional to the product of the quantities of charge on the spheres and is inversely proportional to the square of the distance between the spheres.

- Troisième Mémoire sur l’Électricité et le Magnétisme. "On the quantity of Electricity that an isolated body loses in a certain time period, either by contact with less humid air or in the supports more or less idio-electric."

Four subsequent reports were published in the following years:

- Quatrième Mémoire "Where two principal properties of the electric fluid are demonstrated: first, that this fluid does not expand into any object according to a chemical affinity or by an elective attraction, but that it divides itself between different objects brought into contact; second, that in conducting objects, the fluid, having achieved a state of stability, expands on the surface of the body and does not penetrate into the interior." (1786)

- Cinquième Mémoire "On the manner in which the electric fluid divides itself between conducting objects brought into contact and the distribution of this fluid on the different parts of the surface of this object." (1787)

- Sixième Mémoire "Continuation of research into the distribution of the electric fluid between several conductors. Determination of electric density at different points on the surface of these bodies." (1788)

Coulomb explained the laws of attraction and repulsion between electric charges and magnetic poles, although he did not find any relationship
Electromagnetism
Electromagnetism is one of the four fundamental interactions in nature. The other three are the strong interaction, the weak interaction and gravitation...
between the two phenomena. He thought that the attraction and repulsion were due to different kinds of fluids
Fluid theory of electricity
The fluid theory of electricity is a now defunct theory that postulated an electrical fluid which was responsible for many electrical phenomenon. Although he was not the first proponent, Benjamin Franklin worked to develop the theory...
.