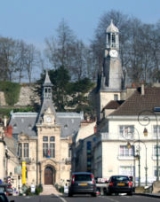 Encyclopedia
Château-Thierry is a commune
Communes of France
The commune is the lowest level of administrative division in the French Republic. French communes are roughly equivalent to incorporated municipalities or villages in the United States or Gemeinden in Germany...
in northern France
France
The French Republic , The French Republic , The French Republic , (commonly known as France , is a unitary semi-presidential republic in Western Europe with several overseas territories and islands located on other continents and in the Indian, Pacific, and Atlantic oceans. Metropolitan France...
about 56 miles (90 km) east-northeast of Paris
Paris
Paris is the capital and largest city in France, situated on the river Seine, in northern France, at the heart of the Île-de-France region...
. It is a sub-prefecture of the Aisne
Aisne
Aisne is a department in the northern part of France named after the Aisne River.- History :Aisne is one of the original 83 departments created during the French Revolution on 4 March 1790. It was created from parts of the former provinces of Île-de-France, Picardie, and Champagne.Most of the old...
department in Picardy
Picardy
This article is about the historical French province. For other uses, see Picardy .Picardy is a historical province of France, in the north of France...
.

In the late years of the western Roman empire, a small town called Otmus was settled on a site where the Soissons
Soissons
Soissons is a commune in the Aisne department in Picardy in northern France, located on the Aisne River, about northeast of Paris. It is one of the most ancient towns of France, and is probably the ancient capital of the Suessiones...
-Troyes
Troyes
Troyes is a commune and the capital of the Aube department in north-central France. It is located on the Seine river about southeast of Paris. Many half-timbered houses survive in the old town...
road crossed the Marne river.

During the 8th century, Charles Martel
Charles Martel
Charles Martel , also known as Charles the Hammer, was a Frankish military and political leader, who served as Mayor of the Palace under the Merovingian kings and ruled de facto during an interregnum at the end of his life, using the title Duke and Prince of the Franks. In 739 he was offered the...
kept king Theuderic IV
Theuderic IV
Theuderic IV or Theuderich, Theoderic, or Theodoric; in French, Thierry was the Merovingian King of the Franks from 721 until his death in 737...
prisoner in the castle of Otmus. At this time, the town took the name of Castrum Theodorici, later transformed in Château-Thierry (Castle of Thierry, Thierry is the French or early Roman language translation of Theuderic).

In 946, the castle of Château-Thierry was the home of Herbert le-Vieux, Count of Omois (Fr: comte d'Omois) of the House of Vermandois
Vermandois
Vermandois was a French county, that appears in the Merovingian period. In the tenth century, it was organised around two castellan domains: St Quentin and Péronne . Pepin I of Vermandois, the earliest of its hereditary counts, was descended in direct male line from the emperor Charlemagne...
& Soissons.

Château-Thierry was the site of two important battles. The Battle of Château-Thierry (1814)
Battle of Château-Thierry (1814)
The Battle of Château-Thierry occurred on 12 February 1814 between a Prussian army under Marshal von Blücher and the French under Emperor Napoleon I...
in the Napoleonic Wars
Napoleonic Wars
The Napoleonic Wars were a series of wars declared against Napoleon's French Empire by opposing coalitions that ran from 1803 to 1815. As a continuation of the wars sparked by the French Revolution of 1789, they revolutionised European armies and played out on an unprecedented scale, mainly due to...
between France
France
The French Republic , The French Republic , The French Republic , (commonly known as France , is a unitary semi-presidential republic in Western Europe with several overseas territories and islands located on other continents and in the Indian, Pacific, and Atlantic oceans. Metropolitan France...
and Prussia
Prussia
Prussia was a German kingdom and historic state originating out of the Duchy of Prussia and the Margraviate of Brandenburg. For centuries, the House of Hohenzollern ruled Prussia, successfully expanding its size by way of an unusually well-organized and effective army. Prussia shaped the history...
, and Battle of Château-Thierry (1918)
Battle of Château-Thierry (1918)
The Battle of Château-Thierry was fought on 18 July 1918 and was one of the first actions of the American Expeditionary Force under General John J. "Black Jack" Pershing...
in World War I
World War I
World War I , which was predominantly called the World War or the Great War from its occurrence until 1939, and the First World War or World War I thereafter, was a major war centred in Europe that began on 28 July 1914 and lasted until 11 November 1918...
, between the United States
United States
The United States of America is a federal constitutional republic comprising fifty states and a federal district...
and Germany
Germany
Germany , officially the Federal Republic of Germany , is a federal parliamentary republic in Europe. The country consists of 16 states while the capital and largest city is Berlin. Germany covers an area of 357,021 km2 and has a largely temperate seasonal climate...
.

In 1918, a mounting for the infamous Paris Gun
Paris Gun
The Paris Gun was a German long-range siege gun used to bombard Paris during World War I. It was in service from March-August 1918. When it was first employed, Parisians believed they'd been bombed by a new type of high-altitude zeppelin, as neither the sound of an airplane nor a gun could be heard...
was found near the castle. The cannon itself was never found.

Château-Thierry is the terminus
Terminal Station
Terminal Station is a 1953 film by Italian director Vittorio De Sica. It tells the story of the love affair between an Italian man and an American woman. The film was entered into the 1953 Cannes Film Festival.-Production:...
station
Train station
A train station, also called a railroad station or railway station and often shortened to just station,"Station" is commonly understood to mean "train station" unless otherwise qualified. This is evident from dictionary entries e.g...
of a regional railway line starting from the Gare de l'Est
Gare de l'Est
is one of the six large SNCF termini in Paris. It is in the 10th arrondissement, not far from the Gare du Nord, facing the Boulevard de Strasbourg, part of the north-south axis of Paris created by Baron Haussmann...
in Paris. It is also one of the exits of the A4 motorway that links Paris with the east part of France.
Transval operates the local bus routes.

Château-Thierry was the birthplace of Jean de La Fontaine. Teddy Roosevelt
Theodore Roosevelt
Theodore "Teddy" Roosevelt was the 26th President of the United States . He is noted for his exuberant personality, range of interests and achievements, and his leadership of the Progressive Movement, as well as his "cowboy" persona and robust masculinity...
's son Quentin
Quentin Roosevelt
Quentin Roosevelt was the youngest and favorite son of President Theodore Roosevelt. Family and friends agreed that Quentin had many of his father's positive qualities and few of the negative ones. Inspired by his father and siblings, he joined the United States Army Air Service where he became a...
was shot down in July 1918 while flying a French SPAD
Société Pour L'Aviation et ses Dérivés
SPAD was a French aircraft manufacturer between 1911 and 1921. Its SPAD S.XIII biplane was the most popular French fighter airplane in World War I.-Deperdussin:...
plane during WWI.