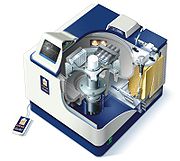 The system works by lowering the pressure in the centrifuge system - as the pressure drops so does the boiling point of the solvent(s) in the system. When the pressure is sufficiently low that the boiling points of the solvents are below the temperature of the sample holder, then they will boil. This enables solvent to be rapidly removed while the samples themselves are not heated to damaging temperatures. High performance systems can remove very high boiling solvents such as DMSO or NMP while keeping sample temperatures below 40 oC at all times.

The centrifugal force generated by spinning the centrifuge rotor creates a pressure gradient within the solvent contained in the tubes or vials, this means that the samples boil from the top down, helping to prevent "bumping". The most advanced systems apply the vacuum slowly and run the rotor at speeds of 500 x gravity - this system is proven to prevent bumping and was patented by Genevac
Genevac
Genevac Ltd is a company which was founded in 1990 by Michael Cole. It used to specialize in the manufacture of vacuum pumps and centrifugal evaporators, but has since directed its attention to equipment designed for combinatorial chemistry. Following a series of mergers, it is currently a...
in the late 1990s.