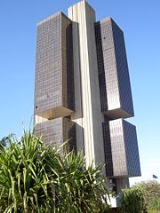 Encyclopedia
The Central Bank of Brazil (Portuguese
Portuguese language
Portuguese is a Romance language that arose in the medieval Kingdom of Galicia, nowadays Galicia and Northern Portugal. The southern part of the Kingdom of Galicia became independent as the County of Portugal in 1095...
: Banco Central do Brasil) is Brazil
Brazil
Brazil , officially the Federative Republic of Brazil , is the largest country in South America. It is the world's fifth largest country, both by geographical area and by population with over 192 million people...
's monetary authority. It was established on December 31, 1964.

The Central Bank is linked with the Ministry of Finance. Like other central banks, the Brazilian central bank is the principal monetary authority of the country. It received this authority when it was founded by three different institutions: the Bureau of Currency and Credit (SUMOC), the Bank of Brazil (BB), and the National Treasury.

One of the arms of Brazil's monetary policy
Monetary policy
Monetary policy is the process by which the monetary authority of a country controls the supply of money, often targeting a rate of interest for the purpose of promoting economic growth and stability. The official goals usually include relatively stable prices and low unemployment...
is the Banco Central do Brasil's SELIC
SELIC
Short for Sistema Especial de Liquidação e Custodia, that is, Special System of Clearance and Custody, SELIC is the Brazilian Central Bank's system for performing open market operations in execution of monetary policy. The SELIC rate is the Banco Central de Brasil's overnight lending rate, which...
rate.