Encyclopedia
The mission of the Central Bank Counterfeit Deterrence Group (CBCDG) (originally designated as Special Study Group 2 or SSG-2 of the G10) is to investigate emerging threats to the security of banknote
Banknote
A banknote is a kind of negotiable instrument, a promissory note made by a bank payable to the bearer on demand, used as money, and in many jurisdictions is legal tender. In addition to coins, banknotes make up the cash or bearer forms of all modern fiat money...
s and to propose solutions for implementation by issuing authorities. The CBCDG is a working group
Working group
A working group is an interdisciplinary collaboration of researchers working on new research activities that would be difficult to develop under traditional funding mechanisms . The lifespan of the WG can last anywhere between a few months and several years...
of 27 central bank
Central bank
A central bank, reserve bank, or monetary authority is a public institution that usually issues the currency, regulates the money supply, and controls the interest rates in a country. Central banks often also oversee the commercial banking system of their respective countries...
s and note printing authorities. 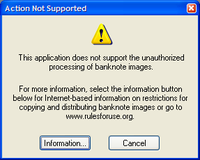 The CBCDG maintains a web site designed to advise the public about national laws related to the reproduction of banknotes.

In 2004, CBCDG announced the development of a "Counterfeit Deterrence System" (CDS) incorporating a technical means for the detection of banknotes. This system was reportedly developed by the U.S.-based watermark technology company Digimarc
Digimarc
Digimarc is a digital watermarking technology provider enabling the invisible embedding of information into many forms of content, including audio, video, imagery, and certain objects...
. CBCDG said that the purpose of this system was to "prevent personal computers and digital imaging tools from capturing or reproducing the image of a protected banknote."

Adobe Systems
Adobe Systems
Adobe Systems Incorporated is an American computer software company founded in 1982 and headquartered in San Jose, California, United States...
was subsequently the subject of controversy in when it was revealed that the firm had voluntarily adopted the CDS in Adobe Photoshop
Adobe Photoshop
Adobe Photoshop is a graphics editing program developed and published by Adobe Systems Incorporated.Adobe's 2003 "Creative Suite" rebranding led to Adobe Photoshop 8's renaming to Adobe Photoshop CS. Thus, Adobe Photoshop CS5 is the 12th major release of Adobe Photoshop...
, preventing Photoshop from processing some images of currency. Jasc (publisher of Paint Shop Pro) and Adobe stated that they had implemented CDS; they reportedly did not receive technical details of the CDS algorithm
Algorithm
In mathematics and computer science, an algorithm is an effective method expressed as a finite list of well-defined instructions for calculating a function. Algorithms are used for calculation, data processing, and automated reasoning...
(in other words, it was provided to them as a black box). Some artists and professional graphic designers suggested that the CDS would make it more difficult for them to use Photoshop to produce images that used currency in lawful ways. Steven J. Murdoch has begun a technical investigation of how the CDS works.