Encyclopedia
The Celtic circular fort at Otzenhausen is one of the biggest fortifications the Celts ever constructed.
It was built by Celts of the Treveri
Treveri
The Treveri or Treviri were a tribe of Gauls who inhabited the lower valley of the Moselle from around 150 BCE, at the latest, until their eventual absorption into the Franks...
tribe, who lived in the region north of the fort. The fort is located on top of the Dollberg, a hill near Otzenhausen
Nonnweiler
Nonnweiler is a municipality in the district of Sankt Wendel, in Saarland, Germany.-Overview:It is situated approx. 20 km northwest of Sankt Wendel, and 30 km southeast of Trier....
in Germany
Germany
Germany , officially the Federal Republic of Germany , is a federal parliamentary republic in Europe. The country consists of 16 states while the capital and largest city is Berlin. Germany covers an area of 357,021 km2 and has a largely temperate seasonal climate...
, about 695 m above sea level. The only visible remains are two circular earth ramparts, covered with stones.

In times of war, the circular rampart
Circular rampart
A circular rampart is an embankment built in the shape of a circle that was used as part of the defences for a military fortification, hill fort or refuge, or was built for religious purposes or as a place of gathering....
was a strong fortification against enemies. Theories suggest this one might have been more than just a refuge. There might have been a permanent settlement, a village or the seat of a local leader.

The first fortification was constructed in the 5th or 4th century BC, but the real heyday of construction dates to the 2nd and 1st century BC. For reasons yet unknown, the fort was abandoned shortly after this expansion. 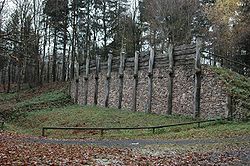 The site is formed in the shape of a triangle with rounded ends. One rampart surrounds the whole fort. On the southern side, another similar embankment is built about 40 metres in front of the main one. The ends of this outer rampart approach the main one but do not touch it. Because the entrance of the main rampart is located on the western side, no significant purpose for the outer one has been determined. From west to east the fort extends 460 m, from north to south 647 m. The total length of the ramparts is 2500 metres and they contain 240,000 cubic metres of stone. Thousands of beams were attached to the ramparts which, as the diagram shows, probably presented a vertical stone wall to the exterior.

Julius Caesar
Julius Caesar
Gaius Julius Caesar was a Roman general and statesman and a distinguished writer of Latin prose. He played a critical role in the gradual transformation of the Roman Republic into the Roman Empire....
describes such ramparts in Book seven chapter 23 of his De Bello Gallico. "But this is usually the form of all the Gallic walls. Straight beams, connected lengthwise and two feet distant from each other at equal intervals, are placed together on the ground; these are mortised on the inside, and covered with plenty of earth. But the intervals which we have mentioned, are closed up in front by large stones. These being thus laid and cemented together, another row is added above, in such a manner that the same interval may be observed, and that the beams may not touch one another, but equal spaces intervening, each row of beams is kept firmly in its place by a row of stones. In this manner the whole wall is consolidated, until the regular height of the wall be completed. This work, with respect to appearance and variety, is not unsightly, owing to the alternate rows of beams and stones, which preserve their order in right lines; and, besides, it possesses great advantages as regards utility and the defence of cities; for the stone protects it from fire, and the wood from the battering ram, since it (the wood) being mortised in the inside with rows of beams, generally forty feet
each in length, can neither be broken through nor torn asunder."
On the western side, there was a gateway, build of wood, standing on eight posts. This gateway was double-winged and 6 m wide. A central post divided the gateway into two gates of 2.5 m each. The wooden posts sunk into the holes of the gatepost were wedged with stones. Broken rock on the ground prevented the earth from being washed away.

Perhaps there was a second gate on the eastern side, but its existence is not yet proven.

From other examples of Celtic forts it is known, that the gateway presumably was a canopied wooden battlement. Because this gateway is build to the inner side of the wall, the ends of the wall and the battlement form a small square, which can be attacked from three sides without leaving cover.

Important for the use of the fort is the existence of a spring on the top of the Dollberg. This spring is a result of the impermeable quartzite the ground consists of.

Holes in the ground, sockets for the wooden posts, prove the existence of buildings. It is unknown whether their purpose was accommodation or storage.

In roman time a small temple of 2.15 metres x 2.70 metres, dating from the 2nd or 3rd century A.D. was built of quartzite rubble stone and brick-shaped sandstone. When German tribes invaded the Roman territories in 4th century A.D, the fort was used again.

During the Thirty Years War (1618–1648) the citizens of the surrounding villages again took refuge in the remains of the Celtic fort.

The first documented appearance of the circular ramparts happened within the Grimburger Salbuch, a geological register of 1589, the first picture of the enclosure in the Gazette de Metz
Metz
Metz is a city in the northeast of France located at the confluence of the Moselle and the Seille rivers.Metz is the capital of the Lorraine region and prefecture of the Moselle department. Located near the tripoint along the junction of France, Germany, and Luxembourg, Metz forms a central place...
from 1836.

The same year, Count Villers von Burgesch addressed a petition to the Prussian king Friedrich Wilhelm III to bar the inhabitants of the nearby villages to carry off stones for use as building material. Reacting to this petition the Crown Prince later King Friedrich Wilhelm IV visited the fort in 1837.
Image:Ringwall von Otzenhausen.jpg
Excavations took place in 1883 and from 1936 to 1939 .

The site can be visited all-season, it is not accessible by handicapped persons. Three information paths lead the visitor through the fort:

Since 1999 the Terrex gGmbH organizes excavations on and about the fortification.

Today the whole aera with exception of the stone circles is covered with forest.