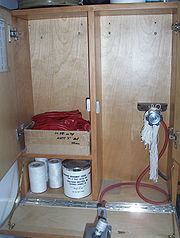 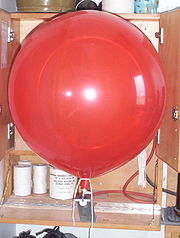 A ceiling balloon is used by meteorologists to determine the height of the base of clouds above ground level
Above ground level
In aviation and atmospheric sciences, an altitude is said to be above ground level when it is measured with respect to the underlying ground surface. This is as opposed to above mean sea level , or in broadcast engineering, height above average terrain...
during daylight hours.
The principle behind the ceiling balloon is a balloon with a known ascent rate (how fast it climbs) and determining how long the balloon rises until it disappears into the cloud.
Ascent rates yield the ceiling height.


How it is used

A ceiling balloon
Balloon
A balloon is an inflatable flexible bag filled with a gas, such as helium, hydrogen, nitrous oxide, oxygen, or air. Modern balloons can be made from materials such as rubber, latex, polychloroprene, or a nylon fabric, while some early balloons were made of dried animal bladders, such as the pig...
is a small, usually red, (fluted) rubber
Rubber
Natural rubber, also called India rubber or caoutchouc, is an elastomer that was originally derived from latex, a milky colloid produced by some plants. The plants would be ‘tapped’, that is, an incision made into the bark of the tree and the sticky, milk colored latex sap collected and refined...
balloon commonly measuring 76 mm (3 in) across prior to inflation, inflated to ~40 cm diameter. After inflation the balloon is taken outside and released. By timing the balloon from release until it enters the cloud a ceiling height can be obtained. When correctly inflated the balloon will rise at rate of 140 m/min (460 ft/min). The bases of clouds are very rarely flat and solid, so the ceiling height is not when the balloon disappears but when the colour begins to fade. The balloon can also be used to measure the vertical visibility into a layer of fog
Fog
Fog is a collection of water droplets or ice crystals suspended in the air at or near the Earth's surface. While fog is a type of stratus cloud, the term "fog" is typically distinguished from the more generic term "cloud" in that fog is low-lying, and the moisture in the fog is often generated...
or blowing snow
Blizzard
A blizzard is a severe snowstorm characterized by strong winds. By definition, the difference between blizzard and a snowstorm is the strength of the wind. To be a blizzard, a snow storm must have winds in excess of with blowing or drifting snow which reduces visibility to 400 meters or ¼ mile or...
. In this case the balloon will begin to fade as soon as it is released, so the vertical visibility is when the balloon disappears. If the balloon is visible for a considerable distance into the cloud layer the observer should make note of it as it is of importance to aircraft.

The ceiling balloon is a reliable, safe and simple way to get an indication of the height of clouds. However, it does suffer from some disadvantages that the observer must be aware of. Rain
Rain
Rain is liquid precipitation, as opposed to non-liquid kinds of precipitation such as snow, hail and sleet. Rain requires the presence of a thick layer of the atmosphere to have temperatures above the melting point of water near and above the Earth's surface...
and wet snow
Snow
Snow is a form of precipitation within the Earth's atmosphere in the form of crystalline water ice, consisting of a multitude of snowflakes that fall from clouds. Since snow is composed of small ice particles, it is a granular material. It has an open and therefore soft structure, unless packed by...
may slow the ascent of the balloon, giving a falsely high ceiling and high winds and poor visibility may cause the balloon to appear to enter the cloud before it actually does. As the balloon rises at a rate of 140 m/min (460 ft/min) it will take over five minutes for the balloon to reach 700 m (2300 ft). Beyond this height the ability to follow the balloon, even with binoculars, is poor, as even the slightest movement of the eye off the balloon will almost certainly ensure that it vanishes.

At night when it is not practical to use a balloon the ceiling projector
Ceiling projector
The ceiling projector or cloud searchlight is used to measure the height of the base of clouds above the ground. It is used in conjunction with an alidade, usually positioned 1000 ft away and wherever possible set at the same level.The projector is normally set at 90°, although 71° 31' may be...
is used. However, during twilight it may be impossible to use the ceiling projector and then a pibal (pilot balloon) light may be used. This is a simple flashlight bulb attached to a battery. To charge the battery it is immersed in water for three minutes and then tied to the balloon prior to inflation. These are rarely used today.

The balloons and associated equipment are usually stored in a cabinet mounted on a wall close to the gas cylinders. The cabinet has three doors one of which opens down and to it the filler stand is attached. At the top of the filler stand is a "L" shaped pipe with two rings, a small one on the bottom and a larger one on the top called the inflation
Inflation
In economics, inflation is a rise in the general level of prices of goods and services in an economy over a period of time.When the general price level rises, each unit of currency buys fewer goods and services. Consequently, inflation also reflects an erosion in the purchasing power of money – a...
nozzle. The rings stop the tube from dropping through the stand or rising too far when the balloon is inflated. The top ring has several grooves cut into it, to help grip the balloon which is fitted to it.

At the bottom of the pipe is a weight that, when the precise amount of gas has been added, will lift to indicate the balloon is full. A rubber hose is attached to this pipe and passes through the filler stand twice. The first hole is larger than the tube to permit movement, while the second is used to hold the tubing in place.

From there the tube runs to a needle valve
Needle valve
A needle valve is a type of valve having a small port and a threaded, needle-shaped plunger. It allows precise regulation of flow, although it is generally only capable of relatively low flow rates.- Construction and operation :...
that controls the amount of gas flowing to the balloon. A second tube will then run from the valve to a regulator valve
Pressure regulator
A pressure regulator is a valve that automatically cuts off the flow of a liquid or gas at a certain pressure. Regulators are used to allow high-pressure fluid supply lines or tanks to be reduced to safe and/or usable pressures for various applications....
that is attached to the gas cylinder. This valve has two pressure gauges attached. One showing the total pressure remaining in the gas cylinder and the second showing the amount of gas flowing through the tubing. Typically the cylinder, which is made of steel and weighs about 140 lb (65 kg). It contains the equivalent of about 200 ft³ (5.7 m³) of gas at standard pressure, stored at a pressure of 2000 psi (14 megapascals) and will inflate approximately 120 balloons (according to a nominal diameter of 45 cm).

On the opposite side of the cabinet is space to store balloons, string and pibal lights. The gas used to fill the balloon is helium
Helium
Helium is the chemical element with atomic number 2 and an atomic weight of 4.002602, which is represented by the symbol He. It is a colorless, odorless, tasteless, non-toxic, inert, monatomic gas that heads the noble gas group in the periodic table...
or hydrogen
Hydrogen
Hydrogen is the chemical element with atomic number 1. It is represented by the symbol H. With an average atomic weight of , hydrogen is the lightest and most abundant chemical element, constituting roughly 75% of the Universe's chemical elemental mass. Stars in the main sequence are mainly...
. Because of its low cost ceiling balloons are often filled with hydrogen gas, but sometimes helium is used.

Caution must be used during inflation due to the occasional faulty balloon and its failure. If the person inflating the balloon is not wearing goggles or hearing protectors then eye or ear damage can result.