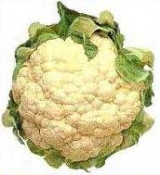 Overview
Cauliflower is one of several vegetables in the species Brassica oleracea
Brassica oleracea
Brassica oleracea, or wild cabbage, is a species of Brassica native to coastal southern and western Europe, where its tolerance of salt and lime and its intolerance of competition from other plants typically restrict its natural occurrence to limestone sea cliffs, like the chalk cliffs on both...
, in the family Brassicaceae
Brassicaceae
Brassicaceae, a medium sized and economically important family of flowering plants , are informally known as the mustards, mustard flowers, the crucifers or the cabbage family....
. It is an annual plant
Annual plant
An annual plant is a plant that usually germinates, flowers, and dies in a year or season. True annuals will only live longer than a year if they are prevented from setting seed...
that reproduces by seed. Typically, only the head (the white curd) of aborted floral meristem
Meristem
A meristem is the tissue in most plants consisting of undifferentiated cells , found in zones of the plant where growth can take place....
s is eaten, while the stalk and surrounding thick, green leaves are used in vegetable broth or discarded.

Its name is from Latin
Latin
Latin is an Italic language originally spoken in Latium and Ancient Rome. It, along with most European languages, is a descendant of the ancient Proto-Indo-European language. Although it is considered a dead language, a number of scholars and members of the Christian clergy speak it fluently, and...
caulis (cabbage) and flower, an acknowledgment of its unusual place among a family of food plants which normally produces only leafy greens for eating.

I am 70 years old and I ask if I'm imagining that caluiflowers have changed in the last 50 years. They seem to me to have thicker stalks, more leaves...
More
x