Encyclopedia
For the 1951 film, see Cattle Drive (1951 film)
Cattle Drive
Cattle Drive is a 1951 western film directed by Kurt Neumann and starring Joel McCrea. Much of the film was shot in the Death Valley National Park, California and Paria, Utah.-Plot synopsis:...
. 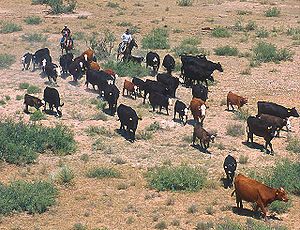 A cattle drive is the process of moving a herd of cattle
Cattle
Cattle are the most common type of large domesticated ungulates. They are a prominent modern member of the subfamily Bovinae, are the most widespread species of the genus Bos, and are most commonly classified collectively as Bos primigenius...
from one place to another, usually moved and herded by cowboy
Cowboy
A cowboy is an animal herder who tends cattle on ranches in North America, traditionally on horseback, and often performs a multitude of other ranch-related tasks. The historic American cowboy of the late 19th century arose from the vaquero traditions of northern Mexico and became a figure of...
s on horse
Horse
The horse is one of two extant subspecies of Equus ferus, or the wild horse. It is a single-hooved mammal belonging to the taxonomic family Equidae. The horse has evolved over the past 45 to 55 million years from a small multi-toed creature into the large, single-toed animal of today...
s.

Australia is noted for long drives. Patsy Durack, for instance, left Queensland for the Kimberleys in Western Australia in 1885 with 8,000 cattle, arriving with only half that number some two years and two months later, completing a drive of some 3,000 miles. Indeed, long cattle drives continued well into the latter half of the twentieth century.

On March 26, 1883 two Scottish/Australian families, the MacDonalds and the McKenzies, began a huge cattle drive from Clifford’s Creek near Goulburn, New South Wales to the Kimberleys of Western Australia, where they established “Fossil Downs” station.
The journey of over 6,000 km lasted more than three years and involved Charles (’Charlie’) MacDonald (1851–1903) and William Neil
(’Willie’) MacDonald (1860–1910), sons of Donald MacDonald from Broadford on the Isle of Skye (who had sailed from Scotland in the
1830s). The family moved to Clifford's Creek, Laggan, and the brothers had become expert bushmen.
The cattle drive was undertaken after Donald MacDonald heard glowing reports of the Kimberley region from Scots/Australian explorer
Alexander Forrest in 1879. The MacDonalds and the McKenzies formed a joint venture to obtain leases in the Kimberleys and to stock them by overlanding the cattle.
The brothers were joined by their cousins Alexander and Donald MacKenzie, Peter Thomson, James McGeorge and Jasper Pickles. They set out with 670 cattle, 32 bullocks yoked to two wagons and 86 horses. All foodstuffs and equipment for the long journey were carried in the wagons. Drought conditions delayed progress and most of the original party, apart from Charlie and Willie MacDonald, withdrew long before Cooper's Creek was reached. Stock losses were replaced, only to be reduced again by the continued drought. Despite a gruelling journey through crocodile and mosquito infested territory in the top end with frequent Aboriginal attacks, the cattle eventually arrived at the junction of the Margaret and Fitzroy Rivers in July 1886 and “Fossil Downs” station was established.
It is the longest cattle drive in history.

An Australian cattle drive is depicted in the film Australia. 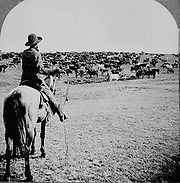 Cattle drives involved cowboys on horseback moving herds of cattle long distances to market. It was a major economic activity in the American west, particularly between the years 1866-95, when 10 million cattle were herded from Texas to railheads in Kansas for shipments to stockyards in Chicago and points east. Because of extensive treatment of cattle drives in fiction and film, the cowboy became the worldwide iconic image of the American West.