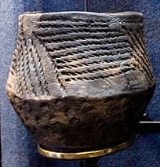 Encyclopedia
The Catacomb culture, ca. 2800-2200 BC, refers to an early Bronze Age
Bronze Age
The Bronze Age is a period characterized by the use of copper and its alloy bronze as the chief hard materials in the manufacture of some implements and weapons. Chronologically, it stands between the Stone Age and Iron Age...
culture occupying essentially what is present-day Ukraine
Ukraine
Ukraine is a country in Eastern Europe. It has an area of 603,628 km², making it the second largest contiguous country on the European continent, after Russia...
. It is seen more as a term covering several smaller related archaeological cultures.

The culture was the first to introduce corded pottery decorations into the steppes and shows a profuse use of the polished battle axe
Battle axe
A battle axe is an axe specifically designed for combat. Battle axes were specialized versions of utility axes...
, providing a link to the West. Parallels with the Afanasevo culture
Afanasevo culture
The Afanasevo culture, traditionally dated to 2500–2000 BC , is an archaeological culture of the late copper and early Bronze Age of southern Siberia....
, including provoked cranial deformations, provide a link to the East. It was preceded by the Yamna culture
Yamna culture
The Yamna culture is a late copper age/early Bronze Age culture of the Southern Bug/Dniester/Ural region , dating to the 36th–23rd centuries BC...
and succeeded by the western Corded Ware culture
Corded Ware culture
The Corded Ware culture , alternatively characterized as the Battle Axe culture or Single Grave culture, is an enormous European archaeological horizon that begins in the late Neolithic , flourishes through the Copper Age and culminates in the early Bronze Age.Corded Ware culture is associated with...
. The Catacomb culture in the Pontic steppe
Pontic-Caspian steppe
The Pontic-Caspian steppe is the vast steppeland stretching from the north of the Black Sea as far as the east of the Caspian Sea, from western Ukraine across the Southern Federal District and the Volga Federal District of Russia to western Kazakhstan,...
was succeeded by the Srbna culture
Srubna culture
The Srubna culture , was a Late Bronze Age culture. It is a successor to the Yamna culture, the Pit Grave culture and the Poltavka culture....
from ca the 17th century BC.

The name Catacomb culture comes from its burial practices. These are similar to those of the Yamna culture, but with a hollowed-out space off the main shaft, creating the 'catacomb'. Animal remains were incorporated into a small minority of graves.

In certain graves there was the distinctive practice of what amounts to modelling a clay mask over the deceased's face, creating an obvious if not necessarily correct association to the famous gold funeral mask of Agamemnon
Mask of Agamemnon
The Mask of Agamemnon is an artifact discovered at Mycenae in 1876 by Heinrich Schliemann. The artifact is a funeral mask hewn in gold, and was found over the face of a body located in a burial shaft...
(see also Tashtyk culture
Tashtyk culture
Tashtyk culture was an archaeological culture that flourished in the Yenisei valley from the first to the fourth century CE, perhaps equivalent to the Yenisei Kirghiz...
).

The economy was essentially stock-breeding, although traces of grain have been found. There seem to have been skilled specialists, particularly metal-workers.

The origin of the Catacomb Culture is disputed. Jan Lichardus enumerates three possibilities: a local development departing from the previous Yamna Culture only, a migration from Central Europe, or an oriental origin. The culture is first to introduce corded pottery decorations into the steppes and shows a profuse use of the polished battle axe
Battle axe
A battle axe is an axe specifically designed for combat. Battle axes were specialized versions of utility axes...
, providing a link to the West. Parallels with the Afanasevo culture
Afanasevo culture
The Afanasevo culture, traditionally dated to 2500–2000 BC , is an archaeological culture of the late copper and early Bronze Age of southern Siberia....
, including provoked cranial deformations, provide a link to the East.

The Catacomb culture was ousted by the Srubna
Srubna culture
The Srubna culture , was a Late Bronze Age culture. It is a successor to the Yamna culture, the Pit Grave culture and the Poltavka culture....
(Timber-grave) culture from ca. the 17th century.

The linguistic composition of the Catacomb culture is unclear. Within the context of the Kurgan hypothesis
Kurgan hypothesis
The Kurgan hypothesis is one of the proposals about early Indo-European origins, which postulates that the people of an archaeological "Kurgan culture" in the Pontic steppe were the most likely speakers of the Proto-Indo-European language...
expounded by Marija Gimbutas
Marija Gimbutas
Marija Gimbutas , was a Lithuanian-American archeologist known for her research into the Neolithic and Bronze Age cultures of "Old Europe", a term she introduced. Her works published between 1946 and 1971 introduced new views by combining traditional spadework with linguistics and mythological...
, an Indo-European
Indo-European languages
The Indo-European languages are a family of several hundred related languages and dialects, including most major current languages of Europe, the Iranian plateau, and South Asia and also historically predominant in Anatolia...
component is hard to deny, particularly in the later stages. Placing the ancestors of the Greek
Greek language
Greek is an independent branch of the Indo-European family of languages. Native to the southern Balkans, it has the longest documented history of any Indo-European language, spanning 34 centuries of written records. Its writing system has been the Greek alphabet for the majority of its history;...
, Armenian
Armenian language
The Armenian language is an Indo-European language spoken by the Armenian people. It is the official language of the Republic of Armenia as well as in the region of Nagorno-Karabakh. The language is also widely spoken by Armenian communities in the Armenian diaspora...
and Paleo-Balkan
Paleo-Balkan languages
Paleo-Balkan is a geolinguistic term referring to the Indo-European languages that were spoken in the Balkans in ancient times. Except for Greek and the language that gave rise to Albanian , they are all extinct, due to Hellenization, Romanization, and Slavicisation.- Classification :The following...
dialects here is tempting, as it would neatly explain certain shared features.

More recently, the Ukrainian archaeologist V. Kulbaka has argued that the Late Yamna cultures of ca. 3200-2800 BC, esp. the Budzhak, Starosilsk, and Novotitarovka groups, might represent the Greek-Armenian-"Aryan"(=Indo-Iranian) ancestors (Graeco-Aryan, Graeco-Armenian
Graeco-Armenian
Graeco-Armenian is the hypothetical common ancestor of the Greek and Armenian languages which postdates the Proto-Indo-European...
), and the Catacomb culture that of the "unified" (to ca. 2500 BC) and then "differentiated" Indo-Iranians.

Grigoryev's (1998) version of the Armenian hypothesis
Armenian hypothesis
The Armenian hypothesis of the Proto-Indo-European Urheimat, based on the Glottalic theory suggests that the Proto-Indo-European language was spoken during the 4th millennium BC in the Armenian Highland or Aryan Highland. It is an Indo-Hittite model and does not include the Anatolian languages in...
connects Catacomb culture with Indo-Aryans
Indo-Aryans
Indo-Aryan is an ethno-linguistic term referring to the wide collection of peoples united as native speakers of the Indo-Aryan branch of the Indo-Iranian family of Indo-European languages...
, because catacomb burial ritual had roots in South-Western Turkmenistan
Turkmenistan
Turkmenistan , formerly also known as Turkmenia is one of the Turkic states in Central Asia. Until 1991, it was a constituent republic of the Soviet Union, the Turkmen Soviet Socialist Republic . Turkmenistan is one of the six independent Turkic states...
from the early 4th millennium (Parkhai cemetery).