How many processes are in the carnot cycle

What is carnot cycle?

Encyclopedia
The Carnot cycle is a theoretical thermodynamic cycle
Thermodynamic cycle
A thermodynamic cycle consists of a series of thermodynamic processes transferring heat and work, while varying pressure, temperature, and other state variables, eventually returning a system to its initial state...
proposed by Nicolas Léonard Sadi Carnot
Nicolas Léonard Sadi Carnot
Nicolas Léonard Sadi Carnot was a French military engineer who, in his 1824 Reflections on the Motive Power of Fire, gave the first successful theoretical account of heat engines, now known as the Carnot cycle, thereby laying the foundations of the second law of thermodynamics...
in 1824 and expanded by Benoit Paul Émile Clapeyron in the 1830s and 40s. It can be shown that it is the most efficient cycle for converting a given amount of thermal energy into work, or conversely, creating a temperature difference (e.g. refrigeration) by doing a given amount of work.

The Carnot cycle when acting as a heat engine consists of the following steps: 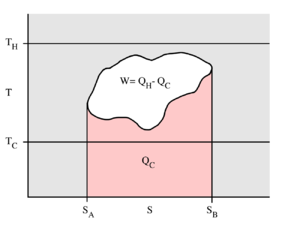 The behaviour of a Carnot engine or refrigerator is best understood by using a temperature-entropy (TS) diagram, in which the thermodynamic state is specified by a point on a graph with entropy
Entropy
Entropy is a thermodynamic property that can be used to determine the energy available for useful work in a thermodynamic process, such as in energy conversion devices, engines, or machines. Such devices can only be driven by convertible energy, and have a theoretical maximum efficiency when...
(S) as the horizontal axis and temperature (T) as the vertical axis. For a simple system with a fixed number of particles, any point on the graph will represent a particular state of the system. A thermodynamic process will consist of a curve connecting an initial state (A) and a final state (B). The area under the curve will be: 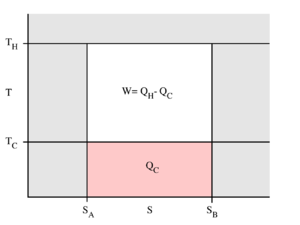 Evaluation of the above integral is particularly simple for the Carnot cycle. The amount of energy transferred as work is

is defined to be:

is the heat put into the system (heat energy entering the system),

is the absolute temperature of the cold reservoir, and

is the absolute temperature of the hot reservoir.

is the maximum system entropy

is the minimum system entropy


This efficiency makes sense for a heat engine
Heat engine
In thermodynamics, a heat engine is a system that performs the conversion of heat or thermal energy to mechanical work. It does this by bringing a working substance from a high temperature state to a lower temperature state. A heat "source" generates thermal energy that brings the working substance...
, since it is the fraction of the heat energy extracted from the hot reservoir and converted to mechanical work. A Rankine cycle
Rankine cycle
The Rankine cycle is a cycle that converts heat into work. The heat is supplied externally to a closed loop, which usually uses water. This cycle generates about 90% of all electric power used throughout the world, including virtually all solar thermal, biomass, coal and nuclear power plants. It is...
is usually the practical approximation.

It can be seen from the above diagram, that for any cycle operating between temperatures

, none can exceed the efficiency of a Carnot cycle.

In other words, maximum efficiency is achieved if and only if no new entropy is created in the cycle. Otherwise, since entropy is a state function
State function
In thermodynamics, a state function, function of state, state quantity, or state variable is a property of a system that depends only on the current state of the system, not on the way in which the system acquired that state . A state function describes the equilibrium state of a system...
, the required dumping of heat into the environment to dispose of excess entropy leads to a reduction in efficiency. So Equation 3 gives the efficiency of any reversible
Reversible process (thermodynamics)
In thermodynamics, a reversible process, or reversible cycle if the process is cyclic, is a process that can be "reversed" by means of infinitesimal changes in some property of the system without loss or dissipation of energy. Due to these infinitesimal changes, the system is in thermodynamic...
heat engine
Heat engine
In thermodynamics, a heat engine is a system that performs the conversion of heat or thermal energy to mechanical work. It does this by bringing a working substance from a high temperature state to a lower temperature state. A heat "source" generates thermal energy that brings the working substance...
.

In mesoscopic heat engines, work per cycle of operation fluctuates due to thermal noise.
For the case when work and heat fluctuations are counted, there is exact equality that relates average of exponents of work performed by any heat engine and the heat transfer from the hotter heat bath . This relation transforms the Carnot's inequality into exact equality that is applied to an arbitrary heat engine coupled to two heat reservoirs and operating at arbitrary rate.

Carnot realized that in reality it is not possible to build a thermodynamically reversible engine, so real heat engines are less efficient than indicated by Equation 3. Nevertheless, Equation 3 is extremely useful for determining the maximum efficiency that could ever be expected for a given set of thermal reservoirs.

Although Carnot's cycle is an idealisation, the expression
of Carnot efficiency is still useful. Consider the average
Average
In mathematics, an average, or central tendency of a data set is a measure of the "middle" value of the data set. Average is one form of central tendency. Not all central tendencies should be considered definitions of average....
temperatures,

at which heat is input and output, respectively. Replace TH and TC in Equation (3) by <TH> and <TC> respectively.

For the Carnot cycle, or its equivalent, <TH> is the highest temperature available and <TC> the lowest. For other less efficient cycles, <TH> will be lower than TH , and <TC> will be higher than TC. This can help illustrate, for example, why a reheater
Economizer
Economizers , or economisers , are mechanical devices intended to reduce energy consumption, or to perform another useful function such as preheating a fluid. The term economizer is used for other purposes as well. Boiler, powerplant, and heating, ventilating, and air-conditioning uses are...
or a regenerator can improve thermal efficiency.