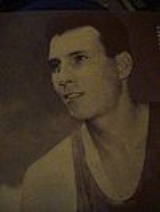 Encyclopedia
Carlos M. Loyzaga is a former Filipino
Philippines
The Philippines , officially known as the Republic of the Philippines , is a country in Southeast Asia in the western Pacific Ocean. To its north across the Luzon Strait lies Taiwan. West across the South China Sea sits Vietnam...
basketball
Basketball
Basketball is a team sport in which two teams of five players try to score points by throwing or "shooting" a ball through the top of a basketball hoop while following a set of rules...
player and coach. He led the Philippine National team to a Bronze Medal finish in the 1954 FIBA World Championship
1954 FIBA World Championship
The 1954 FIBA World Championship was an international basketball tournament held by the International Basketball Federation in Ginásio do Maracanãzinho, Rio de Janeiro, Brazil from October 22 to November 5, 1954...
. The Philippines third place finish remains the highest rank of any Asian team in the history of the tournament. He is also the father of the Filipina TV and movie actresses Bing Loyzaga and Teressa Loyzaga.

Loyzaga was born to a Basque
Basque people
The Basques as an ethnic group, primarily inhabit an area traditionally known as the Basque Country , a region that is located around the western end of the Pyrenees on the coast of the Bay of Biscay and straddles parts of north-central Spain and south-western France.The Basques are known in the...
family during World War II
World War II
World War II, or the Second World War , was a global conflict lasting from 1939 to 1945, involving most of the world's nations—including all of the great powers—eventually forming two opposing military alliances: the Allies and the Axis...
and he is the son of former Philippine national football team member and player Joaquin Loyzaga. After surviving the war with his mother, sister and two brothers, he attended San Beda College
San Beda College
San Beda College or Dalubhasaan ng San Beda in Filipino is a Private Benedictine college run by the Benedictine monks in the Philippines. It is located on Mendiola Street in San Miguel, Manila...
, where he played for the San Beda Red Lions basketball team in the Philippine NCAA
National Collegiate Athletic Association (Philippines)
The National Collegiate Athletic Association is an athletics association of nine colleges and universities in the Philippines. Established in 1924, the NCAA is the oldest athletic association in the Philippines...
. Standing at 191 cm (6 ft 3 in), he towered over most other players in the league and came to be a dominating player at the center position. Because of his shooting and rebounding ability, he quickly became a superstar in the Philippines. He led the Red Lions to a consecutive NCAA championships win during his career.

Loyzaga began his basketball career in 1942, playing for the Santa Mesa Aces whose team included Pablo and Vicente Cuna, Ramón López (the chair of the Letran Hall of Fame), Vicente Siyllon (who became president of Insular Life), and Bobby and Al Tuazon. Their coach was José Lansang. After World War II, Loyzaga played for a team called Bulldogs which was coached by Joker Faustino. He studied at the Padre Burgos Elementary School in Santa Mesa, Manila and National University for his high school.

Loyzaga was about to enroll in University of Santo Tomas
University of Santo Tomas
The Pontifical and Royal University of Santo Tomas, The Catholic University of the Philippines , is a private Roman Catholic university run by the Order of Preachers in Manila. Founded on April 28, 1611 by archbishop of Manila Miguel de Benavides, it has the oldest extant university charter in the...
(UST) for his college education but before he could wear the UST jersey, player and coach Felicisimo Fajardo took him to San Beda College to play basketball. He displayed his basketball skills at the Tervalac playground in Santa Mesa before gaining popularity in the NCAA as a member of the San Beda Red Lions in the 1950s. He also played for the club Pratra, then coached by Gabriel Fajardo. Pratra won the MICAA title in 1951.

He played college basketball for the San Beda Red Lions
San Beda Red Lions
The San Beda Red Lions are the National Collegiate Athletic Association basketball team of San Beda College.San Beda is the only founding member left in the league....
in the NCAA before leading the team to 49 consecutive victories in the now-defunct Manila Industrial and Commercial Athletic Association
Manila Industrial and Commercial Athletic Association
The Manila Industrial and Commercial Athletic Association is a defunct sports association which existed from 1938 to 1981. It is best known for its basketball league for amateur players....
(MICAA) from 1954 to 1956.
Loyzaga, a two-time Olympian was a member of the Philippine national basketball team in the 1950s and early 1960s. He help the national team into becoming one of the best in the world, winning four consecutive Asian Games
Asian Games
The Asian Games, officially known as Asiad, is a multi-sport event held every four years among athletes from all over Asia. The Games were regulated by the Asian Games Federation from the first Games in New Delhi, India, until the 1978 Games. Since the 1982 Games they have been organised by the...
gold medals and two consecutive FIBA Asia Championship
FIBA Asia Championship
The FIBA Asia Championship for Men is a tournament which takes place every two years between teams of the continent. This is the Asian qualifying tournament for the FIBA World Championship and the Olympic basketball tournament...
s.

Loyzaga’s finest moment was the 1954 FIBA World Championship
1954 FIBA World Championship
The 1954 FIBA World Championship was an international basketball tournament held by the International Basketball Federation in Ginásio do Maracanãzinho, Rio de Janeiro, Brazil from October 22 to November 5, 1954...
where he led the Philippines to a third place finish and captured the bronze medal in the process. It is the best finish by an Asia
Asia
Asia is the world's largest and most populous continent, located primarily in the eastern and northern hemispheres. It covers 8.7% of the Earth's total surface area and with approximately 3.879 billion people, it hosts 60% of the world's current human population...
n country and the Philippines have remained the only Asian medalists in the tournament. Loyzaga himself finished as one of the tournament’s leading scorer with a 16.4 points-per-game average and was named in the tournament's All-Star selection. He retired in 1964 following a 15 year career in basketball.