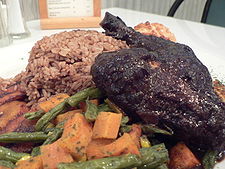 Caribbean
Caribbean
The Caribbean is a crescent-shaped group of islands more than 2,000 miles long separating the Gulf of Mexico and the Caribbean Sea, to the west and south, from the Atlantic Ocean, to the east and north...
cuisine is a fusion of African, Amerindian, British
British cuisine
English cuisine encompasses the cooking styles, traditions and recipes associated with England. It has distinctive attributes of its own, but also shares much with wider British cuisine, largely due to the importation of ingredients and ideas from places such as North America, China, and India...
, Spanish
Spanish cuisine
Spanish cuisine consists of a variety of dishes, which stem from differences in geography, culture and climate. It is heavily influenced by seafood available from the waters that surround the country, and reflects the country's deep maritime roots...
, French
French cuisine
French cuisine is a style of food preparation originating from France that has developed from centuries of social change. In the Middle Ages, Guillaume Tirel , a court chef, authored Le Viandier, one of the earliest recipe collections of Medieval France...
, Dutch
Dutch cuisine
Dutch cuisine is shaped by the practice of fishing and farming, including the cultivation of the soil for raising crops and the raising of domesticated animals, and the history of the Netherlands.-History:...
, Indian
Indian cuisine
Indian cuisine consists of thousands of regional cuisines which date back thousands of years. The dishes of India are characterised by the extensive use of various Indian spices, herbs, vegetables and fruit. Indian cuisine is also known for the widespread practice of vegetarianism in Indian society...
, and Chinese
Chinese cuisine
Chinese cuisine is any of several styles originating in the regions of China, some of which have become highly popular in other parts of the world – from Asia to the Americas, Australia, Western Europe and Southern Africa...
cuisine. These traditions were brought from the many homelands of this region's population. In addition, the population has created styles that are unique to the region.

A local version of Caribbean goat stew has been chosen as the official national dish of Montserrat
Montserrat
Montserrat is a British overseas territory located in the Leeward Islands, part of the chain of islands called the Lesser Antilles in the West Indies. This island measures approximately long and wide, giving of coastline...
and is also one of the signature dishes of St. Kitts and Nevis. It is a tomato
Tomato
The word "tomato" may refer to the plant or the edible, typically red, fruit which it bears. Originating in South America, the tomato was spread around the world following the Spanish colonization of the Americas, and its many varieties are now widely grown, often in greenhouses in cooler...
-based stew, made with goat meat, breadfruit
Breadfruit
Breadfruit is a species of flowering tree in the mulberry family, Moraceae, growing throughout Southeast Asia and most Pacific Ocean islands...
, green pawpaw (papaya
Papaya
The papaya , papaw, or pawpaw is the fruit of the plant Carica papaya, the sole species in the genus Carica of the plant family Caricaceae...
), and dumplings (also known as "droppers"). Another popular dish in the Anglophone Caribbean is called "Cook-up", or Pelau, a dish which combines variations of meats like chicken, beef, saltfish and or pigeon pea
Pigeon pea
The pigeon pea , also known as tropical green pea, toor dāl or arhar dāl , ತೊಗರಿ ಬೇಳೆ kadios , or Congo pea or gungo pea , pois Congo , gandul , gunga pea, or no-eye pea, [Cajanus...
s or vegetables with rice. Callaloo
Callaloo
Callaloo is a popular Caribbean dish served in different variants in across the Caribbean. The main ingredient is a leaf vegetable, traditionally either amaranth , taro or Xanthosoma. Both are known by many names including callaloo, coco, tannia, bhaaji, or dasheen bush...
is a dish containing leafy vegetables and sometimes okra
Okra
Okra is a flowering plant in the mallow family. It is valued for its edible green seed pods. The geographical origin of okra is disputed, with supporters of South Asian, Ethiopian and West African origins...
amongst others, widely distributed in the Caribbean, with a distinctively mixed African and indigenous character.

In some areas Black Cake
Black cake
Black cake or dark fruit cake is a type of fruitcake traditionally associated with Christmas and weddings. It is typically made with plums and raisins soaked in rum, as well as brown sugar and a bittersweet caramel called "browning". The wedding version is much stronger than the Christmas one.It is...
, a derivative of English Christmas pudding may be served, especially on special occasions. In the Cayman Islands
Cayman Islands
The Cayman Islands is a British Overseas Territory and overseas territory of the European Union located in the western Caribbean Sea. The territory comprises the three islands of Grand Cayman, Cayman Brac, and Little Cayman, located south of Cuba and northwest of Jamaica...
, Rum Cake made from locally distilled rum is popular with tourists and locals alike.

Dominican Republic Haitian Cuisine
Haitian cuisine
Haitian cuisine originates from several culinary styles from the various historical ethnic groups that populated the western portion of the island of Hispaniola, namely the French, African, and the Taíno Amerindians.-History:...
Jamaica
Jamaican cuisine
Jamaican cuisine includes a mixture of cooking techniques, flavors, spices and influences from the indigenous people on the island, and the Spanish, British, Africans, and Chinese who have inhabited the island. It is also influenced by the crops introduced into the island from tropical Southeast...
Martinique Puerto Rico
Cuisine of Puerto Rico
Puerto Rican cuisine has its roots in the cooking traditions and practices of Europe , Africa and the Amerindian Taínos. In the latter part of the 19th century the cuisine of Puerto Rico was greatly influenced by the United States in the ingredients used in its preparation...
St. Kitts and Nevis Guyana United States Virgin Islands Trinidad and Tobago Grenada