Encyclopedia
Carentan is a small rural town
Town
A town is a human settlement larger than a village but smaller than a city. The size a settlement must be in order to be called a "town" varies considerably in different parts of the world, so that, for example, many American "small towns" seem to British people to be no more than villages, while...
near the north-eastern base of the French Cotentin Peninsula
Cotentin Peninsula
The Cotentin Peninsula, also known as the Cherbourg Peninsula, is a peninsula in Normandy, forming part of the north-western coast of France. It juts out north-westwards into the English Channel, towards Great Britain...
in Normandy
Normandy
Normandy is a geographical region corresponding to the former Duchy of Normandy. It is in France.The continental territory covers 30,627 km² and forms the preponderant part of Normandy and roughly 5% of the territory of France. It is divided for administrative purposes into two régions:...
in north-western France
France
The French Republic , The French Republic , The French Republic , (commonly known as France , is a unitary semi-presidential republic in Western Europe with several overseas territories and islands located on other continents and in the Indian, Pacific, and Atlantic oceans. Metropolitan France...
near the port city of Cherbourg-Octeville
Cherbourg-Octeville
-Main sights:* La Glacerie has a race track.* The Cité de la Mer is a large museum devoted to scientific and historical aspects of maritime subjects.* Cherbourg Basilica* Jardin botanique de la Roche Fauconnière, a private botanical garden.* Le Trident theatre...
. Carentan has a population somewhat over 6,000 and is now administratively organized as a commune
Communes of France
The commune is the lowest level of administrative division in the French Republic. French communes are roughly equivalent to incorporated municipalities or villages in the United States or Gemeinden in Germany...
in the Manche
Manche
Manche is a French department in Normandy named after La Manche , which is the French name for the English Channel.- History :Manche is one of the original 83 departments created during the French Revolution on March 4, 1790...
department. The town was a strategic early goal of the WWII landings as capturing the town was necessary to link the lodgement
Lodgement
A lodgement is an enclave taken by and defended by force of arms against determined opposition made by increasing the size of a bridgehead, beachhead or airheadOxford English Dictionary lodgement, lodgment "3. The action of establishing oneself or making good a position on an enemy's ground, or...
s at Utah
Utah Beach
Utah Beach was the code name for the right flank, or westernmost, of the Allied landing beaches during the D-Day invasion of Normandy, as part of Operation Overlord on 6 June 1944...
and Omaha beach
Omaha Beach
Omaha Beach is the code name for one of the five sectors of the Allied invasion of German-occupied France in the Normandy landings on 6 June 1944, during World War II...
es which were divided by the Douve River estuary (Nearby fields were flooded by the Germans up to the town's outskirts). The town was also needed as an intermediate staging position for the capture of the cities of Cherbourg and Octeville
Octeville
Octeville may refer to one of the following places in France:* Octeville, Manche since 2000 ADpart of the reorganized minor port city Cherbourg-Octeville, in the Manche department of the Normandy region near the tip of the Cotentin peninsula, France...
, with the critically important port facilities in Cherbourg.

Carentan is close to the sites of the medieval Battle of Formigny
Battle of Formigny
The Battle of Formigny was a battle of the Hundred Years' War fought between England and France. It was a decisive victory for the French.- Background :...
of the Hundred Years' War
Hundred Years' War
The Hundred Years' War was a series of separate wars waged from 1337 to 1453 by the House of Valois and the House of Plantagenet, also known as the House of Anjou, for the French throne, which had become vacant upon the extinction of the senior Capetian line of French kings...
. The town is also likely the site of the historical references to the ancient gallic port
Gaul
Gaul was a region of Western Europe during the Iron Age and Roman era, encompassing present day France, Luxembourg and Belgium, most of Switzerland, the western part of Northern Italy, as well as the parts of the Netherlands and Germany on the left bank of the Rhine. The Gauls were the speakers of...
(documented by Roman sources) as Crociatonum
Crociatonum
Crociatonum or Cronciaconnum in the Tabula Peutingeriana. Ptolemy makes it a port of the Unelli or Veneli, a Gallic nation who occupied part of Brittany. The Table contains a route from Alauna to Caesarodunum , in which the next station to Alauna is Cronciaconnum, distant 10½ M. P. from Alauna....
a possession of the Unelli
Unelli
The Unelli or Veneli were one of the Armoric or maritime states of Gallia. Caesar mentions them with the Veneti, Osismi, Curiosolitae, and other maritime states...
(or Veneli or also Venelli) tribe (Greek: Οὐένελοι) as it is situated on the Douve River slightly inland from the beaches at Normandy—geographically, such gentle terrain as is nearby down the river valley is excellent for boat building 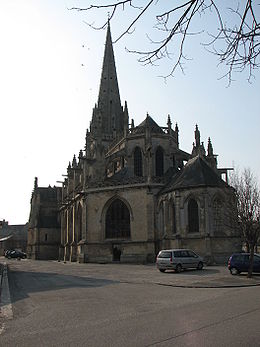 In the early hours of June 6, 1944, the U.S. 82nd Airborne Division
U.S. 82nd Airborne Division
The 82nd Airborne Division is an active airborne infantry division of the United States Army specializing in parachute landing operations. Based at Fort Bragg, North Carolina, the 82nd Airborne Division is the primary fighting arm of the XVIII Airborne Corps....
and 101st Airborne Division
101st Airborne Division
The 101st Airborne Division—the "Screaming Eagles"—is a U.S. Army modular light infantry division trained for air assault operations. During World War II, it was renowned for its role in Operation Overlord, the D-Day landings on 6 June 1944, in Normandy, France, Operation Market Garden, the...
s landed at the base of the Cotentin Peninsula. Although the landings were scattered, they nevertheless secured most of the routes by which the U.S. VII Corps
U.S. VII Corps
The VII Corps of the United States Army was one of the two principal corps of the army in Europe during the Cold War, along with V Corps. Activated in 1918, it was subordinate to the Seventh Army, or USAREUR, throughout most of its existence and based outside of Stuttgart, West Germany, until...
would advance from Utah Beach
Utah Beach
Utah Beach was the code name for the right flank, or westernmost, of the Allied landing beaches during the D-Day invasion of Normandy, as part of Operation Overlord on 6 June 1944...
, the rightmost flank of the allied forces separated from the landings at Omaha and the other beachheads by the Douve River valley. The U.S. 4th Infantry Division
U.S. 4th Infantry Division
The 4th Infantry Division is a modular division of the United States Army based at Fort Carson, Colorado, with four brigade combat teams. It is a very technically advanced combat division in the U.S. Army....
landed on Utah Beach shortly after dawn with few casualties, and began staging for a move against the fortified port of Cherbourg, for a port was critical to allied operations.

In the immediate aftermath of the landings, the priority for the invaders at Utah Beach was to link up with the main Allied landings further west, and this job was tasked to the 101st division, who had landed in the area and had been conducting raids against inland targets—mainly artillery emplacements helping secure and cut off the landings from such threats as well as reinforements. On June 9, the 101st Airborne Division had reorganized sufficiently from the haphazard scattering of its component units and managed to cross the flooded Douve River valley exploiting their superior training and utilizing the few causeways passing through the flooded fields, and they captured Carentan the next day after a dawn attack in the all-day hard fought house to house fighting in the Battle of Carentan
Battle of Carentan
The Battle of Carentan was an engagement in World War II between airborne forces of the United States Army and the German Wehrmacht during the Battle of Normandy. The battle took place between 10 and 15 June 1944, on the approaches to and within the city of Carentan, France.The objective of the...
, where the German troops fought from strong prepared positions amongst the stone houses of the town. The capture of the town gave the invaders a continuous front joining Omaha
Omaha Beach
Omaha Beach is the code name for one of the five sectors of the Allied invasion of German-occupied France in the Normandy landings on 6 June 1944, during World War II...
to Utah Beach
Utah Beach
Utah Beach was the code name for the right flank, or westernmost, of the Allied landing beaches during the D-Day invasion of Normandy, as part of Operation Overlord on 6 June 1944...
and the other three lodgements to the east of Utah. Possession of the town was maintained despite a German armor reinforced counterattack just to the south-west of town on the 13th known as the Battle of Bloody Gulch.

On 15 June, engineers of the Ninth Air Force
Ninth Air Force
The Ninth Air Force is a numbered air force of the United States Air Force's Air Combat Command . It is headquartered at Shaw Air Force Base, South Carolina....
IX Engineering Command began construction of a combat Advanced Landing Ground
Advanced Landing Ground
Advanced Landing Ground was the term given to the temporary advance airfields constructed by the Allies during World War II in support of the invasion of Europe...
for fighter aircraft south of the town. Declared operational on 25 June, the airfield was designated as "A-10
Carentan Airfield
Carentan Airfield is an abandoned World War II military airfield, which is located near the commune of Carentan in the Basse-Normandie region of northern France....
". It was used by P-47 Thunderbolt
P-47 Thunderbolt
Republic Aviation's P-47 Thunderbolt, also known as the "Jug", was the largest, heaviest, and most expensive fighter aircraft in history to be powered by a single reciprocating engine. It was heavily armed with eight .50-caliber machine guns, four per wing. When fully loaded, the P-47 weighed up to...
s of the 50th Fighter Group until mid-August, then as a support airfield for supplies and evacuation of wounded personnel until November when it was closed. Today, a small private airfield is located on part of the wartime facility.

Carentan was also featured in the HBO World War II series Band of Brothers and the fantasy series Sanctuary.

The "101st Airborne March" was composed by Daniel Bourdelès, a Norman composer, for the celebration of the liberation of Carentan, in June 1944. This march created in Carentan is extracted from the CD "Carentan, the sky memory" (1994), produced by the town. It is regularly used as a musical illustration for the Normandy liberation films on France3 regional TV. You can hear it .