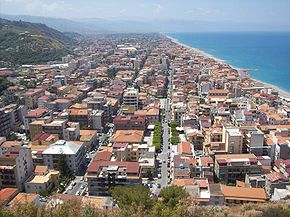 Capo d'Orlando is a comune
Comune
In Italy, the comune is the basic administrative division, and may be properly approximated in casual speech by the English word township or municipality.-Importance and function:...
in the province of Messina
Province of Messina
Messina is a province in the autonomous island region of Sicily in Italy. Its capital is the city of Messina.-Geography and demography :...
, Sicily
Sicily
Sicily is a region of Italy, and is the largest island in the Mediterranean Sea. Along with the surrounding minor islands, it constitutes an autonomous region of Italy, the Regione Autonoma Siciliana Sicily has a rich and unique culture, especially with regard to the arts, music, literature,...
, Italy
Italy
Italy , officially the Italian Republic languages]] under the European Charter for Regional or Minority Languages. In each of these, Italy's official name is as follows:;;;;;;;;), is a unitary parliamentary republic in South-Central Europe. To the north it borders France, Switzerland, Austria and...
and is considered the capital of comprensorio dei Nebrodi. Well-known as a vivacious, active, touristic and commercial center, Capo d'Orlando is also the birthplace of the poet Lucio Piccolo
Lucio Piccolo
Lucio Piccolo di Calanovella , was an Italian poet.-Biography:Born in Palermo, Lucio Piccolo was first degree cousin to Giuseppe Tomasi di Lampedusa, the latter author of The Leopard....
, cousin of Giuseppe Tomasi di Lampedusa
Giuseppe Tomasi di Lampedusa
Giuseppe Tomasi di Lampedusa , was a Sicilian writer. He is most famous for his only novel, Il Gattopardo which is set in Sicily during the Risorgimento...
(see. "Il Gattopardo"). Capo d'Orlando take place artistic's activities (municipal's picture-gallery, the museum
Museum
A museum is an institution that cares for a collection of artifacts and other objects of scientific, artistic, cultural, or historical importance and makes them available for public viewing through exhibits that may be permanent or temporary. Most large museums are located in major cities...
"Villa Piccolo"), enjoyments (cinema
Movie theater
A movie theater, cinema, movie house, picture theater, film theater is a venue, usually a building, for viewing motion pictures ....
, theater, blues club).

It is home of top division basketball team
Serie A (basketball)
Lega Basket Serie A is the highest level club competition in Italian professional basketball where play determines the national champion. The season consists of a home-and-away schedule of 30 games, followed by an eight-team playoff round. Quarterfinals and semifinals series are best-of-five, and...
Orlandina Basket
Orlandina Basket
Orlandina Basket, also known for sponsorship reasons as UPEA Capo d'Orlando is an Italian professional basketball club from the town of Capo d'Orlando, Sicily, Italy. It was founded in 1978, and is among the most recently founded basketball clubs in Italy...
.

The center is nowadays well-known for the summer's seaside related activity, because of the beautiful coastline, offering a wonderful view of the aeolian islands at the horizon right in front, and stunning dawns at evening. Tourism is one of the main resources for the town's local economy. Capo d'Orlando's economy is also based for his remarkable role in the area, for the massive presence of credit and investment banks, commercial activities,some important factories located nearby as "porte imic" (wooden and metal doors manufacturing), "irritec" and "siplast" (irrigation sistems), and the industry related to the exploiting of the extensive presence of oranges of lemons fields all around.

The town shows the typical structure of a new-born mediterranean dwelling, as it's been urbanized properly during the last 40 years, having been in the past just a tiny fisherman's village of bare self-sussistance based living, for there wasn't a real settlement during all the time along the centuries after the destruction and related kidnapping and deportation of the former population of Agathyrnum operated by the Roman republican army, so that it's effectively reborn around 1920 after centuries of effective unexistence when it was moved to the status of Comune(council), while before it was just a part of the territory of Naso (the upper-located hill's town), and the railway station was made, under the fascist "ventennio" (short history). During the 20th century his population amount, influence and touristic development was quickly improved taking Capo d'Orlando to a status of "excellence" in the sicilan frame that it's actually broadly recognized. The town, regardless of its size, is averagely very busy, representing a collector for the entire surrounding area.

The town diplays also a small port for fishing and touristic boats which offers some minor transports to/from the Aeolian islands during the summer's season and around 14 km of awesome beaches, rocky shores facing the deep blue tyrraenian sea making him an ideal summer spot. The position of Capo d'Orlando is also peculiar because if the town just faces the sea, is so close as well (less than 20 km far) to the mount Nebrodi's regional environmental park, a large extension of temperate woods, where is possible to walk through lakes, rivers, falls and tiny historical villages where everyone can enjoy the best of traditional sicilian food and wines.